It’s been a week, and Sridevi’s sudden demise has still not sunk in. One of the chief laments is that her life and career was abbreviated just as it was reaching a new prime. In the history of Hindi cinema though, this misfortune of getting cut down during a promising time has befallen quite a few female actors.  Nutan—who was accoladed with multiple Best Actress award—also passed away when she was 54. Back in the 1950s and 1960s, she bridged the divide between art and commerce in classics such as Anari, Sujata and Bandini.

She also discarded many a convention and remained a sought-after romantic star for a decade after her marriage. Indeed, she won three of her five Best Actress trophies after the birth of her son, Mohnish. She shattered the glass ceiling when she won the Best Actress award for Main Tulsi Tere Angan Ki at the age of 42. Before she succumbed to cancer in 1991, the actress continued to be courted for pivotal roles by noted directors such as Mahesh Bhatt (Naam) and Subhash Ghai (Karma). Nutan witnessed her son Mohnish Bahl achieve fame and success with Maine Pyar Kiya (1989). Sadly, Sridevi will not be able to see her daughter Jhanvi’s debut film that’s up for release. 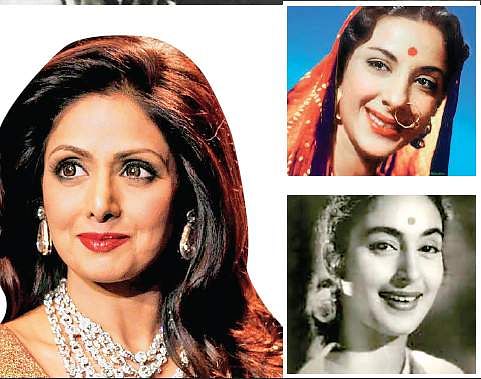 Nargis, too, lost a valiant battle to cancer just four days before the release of her son Sanjay Dutt’s first film, Rocky, in 1981.In a poignant gesture, a seat was kept empty for her at the film’s premiere. Nargis was only 52 when she passed away, after a milestone-filled life. Her tour de force histrionics in the seminal Mother India (1957) capped a rich cinematic career that encompassed several classics such as Barsaat, Awara and Shri 420. Once she married her Mother India co-star Sunil Dutt, she retreated from cinema to carve out one of Hindi cinema’s most successful marriages. She was a multifaceted personality and diversified from films to take on social work with the Spastics Society of India and a prestigious membership in the Rajya Sabha.

While it is debatable whether Nargis would have returned to acting after her children had grown older, it is definite that this confident, capable woman had still a lot to contribute to society.Ironically, Meena Kumari was going through a major career resurgence when she passed away. She was in her fortieth year when the misfortune occurred in 1972, within weeks of the release of her much vaunted central performance in the blockbuster, Pakeezah. It proved to be the swan song of an incredible career. She had risen from playing the child star in Leather Face (1939) to achieving stardom as the ingenue of Baiju Bawra (1952) to being crowned the ‘tragedy queen’ thanks to popular films such as Sharda, Sahib Bibi Aur Ghulam, Dil Ek Mandir and Phool Aur Patthar.

Similarly, there was no denying Meena Kumari’s mastery over her art even when the 1970s saw her essaying older, non-romantic characters like the grey-haired naani of Mere Apne and the wronged widow of Dushman. Pakeezah would have been a game changer for her; and she could have changed the rules and roles actresses of a certain vintage had to abide by then. Had death not decreed otherwise.