A social media post reminded me that Naachiyaar completes a month, this week.

A social media post reminded me that Naachiyaar completes a month, this week. It reminded me that there was something rather discomfiting about it I’d never come around to delving into. Given that the ongoing industry tiff will prohibit films from getting released for the foreseeable future, this seems like a good enough time to discuss the ‘problem of Naachiyaar’. It’s one scene specifically, the one that has the eponymous protagonist, Naachiyaar, slicing off the rapist’s genitals with what another character later calls ‘scientific precision’.

We get shown the scene with the camera fixated on Naachiyaar, as the victim’s blood sputters on her face. The theatre, interestingly, cheered her on, and as indicated by their loud applause, seemed to be relishing the bloodshed. It’s, I suppose, only expected, given the usual social media comments to news stories about rapists. “Tear him to shreds.” “Behead him.” “Execute him in public.” Some demands for punishment are so brutal that they even make the original horrendous crime pale in comparison. Never mind that studies continue to show that punishment does little to deter crime.

Cinema, as they say, is a reflection of society, and so, we end up with stories like Naachiyaar where the heroine, despite being shown to be erroneous in judgment, is trigger-happy. Earlier in the film, for instance, she’s shown beating a man to a bloody pulp under suspicion, and eventually realises he’s innocent. She looks slightly annoyed, and asks him to leave, no apologies tendered. And yet, towards the end when she’s executing her irreversible judgment, the viewers aren’t discomfited, much less horrified. They’re in euphoria. Tear him. Rip him. Execute him.

This simplistic, vengeful notion of justice in Naachiyaar isn’t an isolated case in Tamil cinema, of course. Shankar’s vigilantes have been champions of this philosophy, but interestingly enough, you could make the case that his protagonists aren’t in a position to think straight. They are usually traumatised, and are far from being someone you’d call normal. 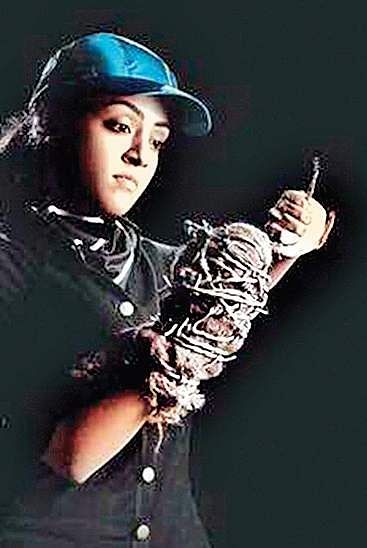 Indian thatha loses his daughter to corruption, and goes on to channel the same violent tendencies that once defined his approach to the freedom struggle. Anniyan is straight-up mentally affected, and again, has lost a close relative — his sister — to corruption. In I, the hero is out for straight-forward vengeance, and of course, again, has, more or less, been psychologically destroyed by then. It’s understandable that such flawed characters resort to barbarism. Damaged people after all often make damaged choices.

But how about when your average cop, an executive of law, turns executioner? How about, say, when it’s romanticised with heroic music, like in the 2016 film, Theri? In the film, it’s implied that the hero, a cop, has smashed the face of an accused with an iron rod, and has tortured him for about two days before eventually doing him the ostensible mercy of killing him. Around then, it’s also revealed that he sliced off the man’s genitals while he was still alive — the director deems it important that we are told that the accused was alive when this happened — and the composer’s music deifies him.

Given the general reception to this scene, it seems very few squirmed in discomfort at this gory revelation. Under the YouTube video of this scene, comments range from praising the hero’s act to calling it a ‘touching scene’. Much like in Naachiyaar, much before this revelation, the director justifies it well in advance by having a constable (Rajendran) talk in detail about the holes in our justice system that allow powerful criminals to get away.

When a character, having been denied rightful justice, resorts to brutality in the name of vigilante justice, it’s a situation to mourn, not one to celebrate. The hero goes on to justify his act to the father of the accused, by calling the dead man — his son —  “an accused, a criminal, a rapist”. The earlier monologue by Rajendran is, of course, a clever device to set you up emotionally for the murder revelation. That’s how you won’t immediately realise something’s off about a policeman who goes about torturing the accused and slicing off body parts.

A usual retort I get when expressing distaste over flagrant misuse of authority — especially when romanticised in films — is, “What if it were your family that were affected by the criminal?” The honest answer is, yes, I’d be likely possessed with bloodlust too, but that’s because I’d be too emotionally affected to be reasonable, to be just, to be humane.

This is why law enforcers have to remain unemotional, have to tower over the weaknesses of an individual. In ancient Rome, crowds, with an instinctive unthinking gesture, often decided whether men lived or died. Sometimes, when you look at our films and social media responses, you have to wonder how much we have changed since then.