Where is today’s great comedian?

Veteran actors like Senthil and Vivekh talk to us about the difficulty of being comedians today, and discuss their diminished shelf life in the industry.

What's 30 for NS Krishnan, Thangavelu and Nagesh, 20 for Goundamani, 15 for Senthil, Vivekh and Vadivelu and 8 for Santhanam? The number of years they were at the peak of their career. Of course, veteran actors such as Nagesh spent close to 50 years in the industry but what's obvious from the numbers as we dissect the names that redefined comedy in each generation, is that the number of years they ruled the roost has decreased almost exponentially.

The most obvious reason could be that there are as many comedias currently active than what we've had from the beginning of Tamil cinema. In the words of Chinni Jayanth, "including those performing in TV, there must be about 500 comedians in the Tamil entertainment industry right now."

Naturally, the actor feels that the population is too much to handle. "It's not a competitive industry but a crowded one and the talented artists get diluted in this crowd. A segregation is required here. In IPL, the rules state that two new players from the team's state should be a part of the team.

This is for them to mingle with seniors. Similarly, directors should encourage new faces to act alongside veteran actors and the upcoming artists will find their own place in the long run," says Chinni Jayanth who points out that this system of blending talents happens in other regional languages and even Hollywood.

Commenting on how easy it is to become an actor, he adds, "If you have `3 crore, you can be a hero. Innum reporters thaan actingku varale (laughs). Directors are also becoming comedians these days, which is ironically humourous. 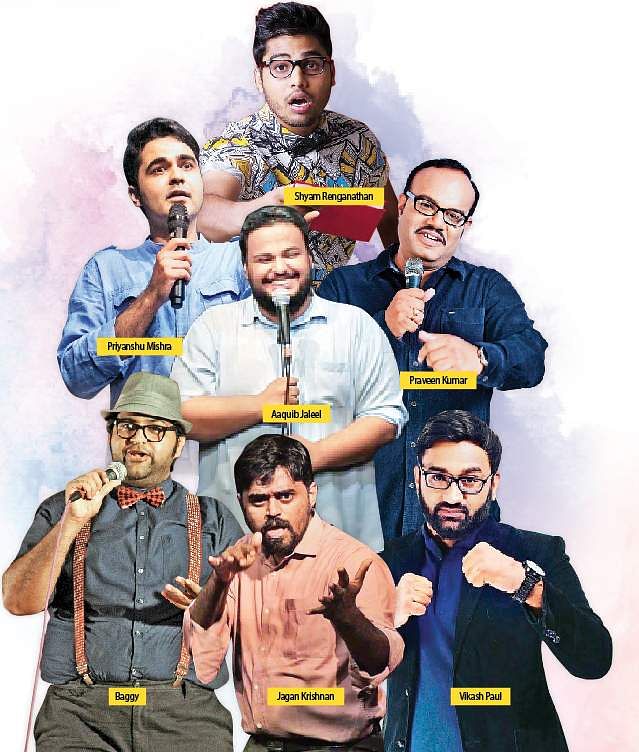 They would actually make more money in another business but because of such practices, talented artists are lost." The veteran believes that such days will soon be a thing of the past. "Vishal is doing a good job of regulating many issues and I'm sure this will also be regulated. That way, new talents will get to act in more films and that'll lead to getting recognized. We've created a brand for ourselves as there was an order when we entered the industry. The 80s and 90s were the golden period of Tamil cinema. People came to the theatres as there weren't media.

Films like Kizhakku Vasal and Idhayam ran for 175 days. If a film survives 100 shows today, it's quite a big deal. Now you get to see films in mobile too. But it's the crowd that people aren't getting recognised despite so many platforms." This resonates with the opinion of general public too. Rajavazhuthi, an ardent follower of Tamil cinema says, "there are more comedians than heroes today but the content they put out is recycled from older comedies and most of the time there rarely evoke more than a chuckle.

The double innuendos make it hard to bring the family to the theatres too."But the legendary humorist Senthil points out the comedians these days aren't even reaching the audience. "That's why they're still enjoying the comedy that came out years back. I wouldn't say the comedy these days aren't up to the mark but if we give what the audience wants, it'll reach them easily and that'll translate into the growth of an artist," he says.

Talking about the changes in the current generation such as the lack of a comedy duo such as him and Goundamani, Senthil adds, "apart from the competition, things change when the generation changes. There are chances for another duo to make rounds soon in the next generation."

Comedians in the current generation say that the comedy back in 80s and 90s are evergreen and hence it's hard to match up to it. Director turned comedian Manobala feel that and adds, "there's nothing wrong with the timeframe reducing actually. Antha kalathule nadippu-eh pathange, panatha paakale. But it's the other way around nowadays. It's been 4o years since I got into the industry but artists and technicians these days don't really care about the number of years spent in the industry. They want to make a quick buck, settle down quickly and move on. I had a newbie asking 'chamber vaasal-le selai vekavaporange?'. That's the mentality they have and I think they're being practical."

He also adds that comedians aren't getting challenging content to prove their mettle. "Balachander used Nagesh as an artist and Kamal Haasan even made Nagesh as an antagonist. Why should we still stick to the roles commonly associated with comedians? As someone who also does films in other languages, I'm awe-struck with how the young directors there use us," says Manobala who adds that the current leading comedians such as Soori, Robo Shankar and Yogi Babu can pull off serious roles brilliantly. "If we have

the power to make you laugh, we can also make you cry with our acting. Right from Chandrababu and Nagesh to Vadivelu in Thevar Magan, comedians have proved it. When was the last time anyone played a role like Maadi Veetu Madhu (Nagesh in Ethir Neechal - 1968)?" Though he's quick to add that he doesn't blame the directors, he feels that there's a lack of trust.

"What hurts is that directors from other languages trust us more. Back then there were actors such as VK Ramasamy and Manivannan and I bet you can't categorise them as character artists or comedians. That's how Thambi Ramaiah won a National Award too. If given the opportunity, we'll even get International recognition."

Thambi Ramaiah who won the award for playing a supporting role in Mynaa believes that the use of comedians in cinema has changed tremendously over the years. "These days, I feel that creators are pushed to make films for the theatre audience. Back then, there used to be comedy tracks which ran parallel to the main story. The stars too had acceptance to be dominated by comedians. The culture of tracks are long gone now and now, the stories are also written to move around the lead role," says the actor who adds that family stories which aren't a norm these days gave ample scope for humour.

"Back in NSK sir days, they were able to give a message comically in films that spoke about families and emotions. When the story is about a family there'll be people of different characters and this widens the space to do comedy. Since we don't see such films anymore, it directly affects the life-span of comedians," he adds.

Comedian Karunakaran too echoes the lack of content and content-writer, "I believe comedy is more dependent on writing than performance. Veteran comedians worked relentlessly with their team after they get their scenes from directors and that was the reason they still make us laugh. Writers should be paid well they should be happy to make us happier," says Karunakaran.

Vivekh, an actor who had stayed relevant for many years brings even more points to the table. "The runtime of films are reducing. What used to be close to three hours is now shrunk to a little over two hours. This causes a dearth of footage space for comedians. Hence we aren't able to show our full expertise and are reduced to a character in the film. Vadivelu and I had tracks but that's something that doesn't happen anymore." But the actor affirms that it's not the comedians alone who face this. "Savitri amma acted for decades but heroines these days leave the industry in a matter of a couple of years." Vivekh also acknowledges that people don't have to rely on films alone to get their daily dose of humour. "Social media websites and meme creators have proved it. The public have themselves become performers. Thanks to such platforms, general audience are able to create their own content and make millions watch."

With these many sizeable issues weighing down on the countless performers' Tamil cinema is introducing on a daily basis, it's unclear if they'll all get their shot at the limelight. But what's obvious is that unless a solution is predicated, the lifespan of these artists will be spiraling lower.

More from Entertainment Tamil.
Now we are on Telegram too. Follow us for updates