On account of Vijayadasami, the makers of the Queen remake have released the first look of the Kajal Aggarwal, Tamannaah, Manjima Mohan and Parul Yadav starrers.

On account of Vijayadasami, the makers of 'Paris Paris', the remake of Hindi movie Queen, have released the first look of the Tamil film starring Kajal Aggarwal. The first looks the Malayalam, Telugu and Kannada version was also released.

The Tamil caption translates to: "This Vijayadasami, your Parameshwari is coming to meet you all!"

The film's director, Ramesh Aravind also Tweeted the first look, saying that directing the film "was so fulfilling." 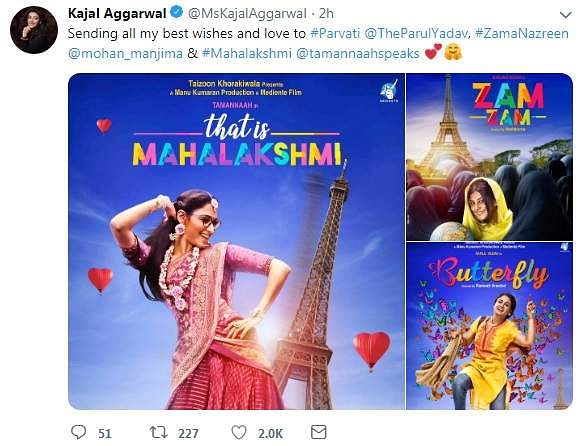 The Tamil film will see Kajal Aggarwal in the lead, Manjima Mohan, Tamannaah and Parul Yadav will star in the Malayalam, Telugu and Kannada versions respectively. The Tamil and Kannada films 'Paris Paris' and 'Butterfly' is directed by Ramesh Aravind, and the Malayalam film 'Zam Zam' is helmed by Neela Kanta. The Tamannaah starrer Telugu version 'That is Mahalakshmi' is directed by Prashanth Varma.

The Hindi movie 'Queen' starring Kangana Ranaut in the lead was released in 2014 and was directed by Vikas Bahl. The film was critically acclaimed for its heartwarming, woman-centric story and Kangana's acting. The film is about an innocent woman who is stood up by her fiance, and despite being grief-stricken she takes her honeymoon tour on her own.