Talking about how the said incident should not be slotted as improvisations done on the set, Hariharan said, “It is like ‘good touch’ and ‘bad touch’.

By Shraddha A
Express News Service

CHENNAI: With the #MeToo movement in India becoming stronger with every passing day, Sruthi Hariharan has now released a statement alleging ‘lewd and unprofessional’ behaviour by actor-filmmaker Arjun during the making of Arun Vaidyanathan’s Tamil-Kannada bilingual Nibunan/Vismayam.

On Saturday, Hariharan released a statement on social media describing in detail an incident that allegedly occurred on the sets during the filming of an intimate scene during which he, without her consent or prior discussion, allegedly ran his hands “intimately” up and down her back and then pulled her closer.

She also alleged that during production, Arjun made her uncomfortable with innuendoes and ‘salacious invitations’ to meet him after work.

#metoo #comingout against all odds. Inspite of the all the comments, backlash and misogyny that will follow, I share my experiences below cos this is about a larger change! Bring it on ! #Speakup men and women . It's time. pic.twitter.com/xzjA8EnGjR

The actor told Express, “If I have come out with this, I have done so knowing all the consequences.”

She added it was her choice to come out with the story whenever she wanted and was not fair to ask why she was talking about the incident now.

Meanwhile, director Vaidyanathan took to social media and said that he didn’t remember the details of the incident to which Hariharan was referring, but remembered Arjun asking for the intimacy in the said scene to be toned down. 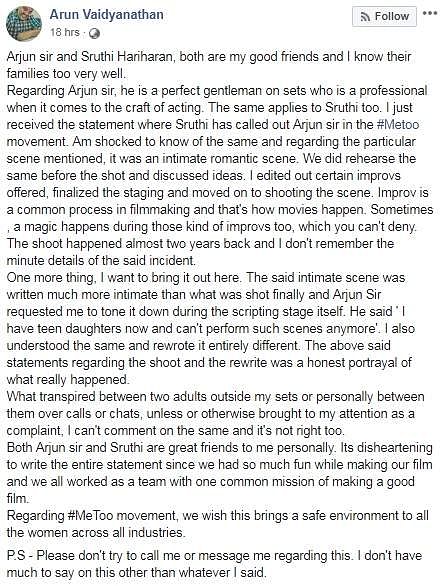 Talking about how the said incident should not be slotted as improvisations done on the set, Hariharan said, “It is like ‘good touch’ and ‘bad touch’. As a woman, I know the person’s intent and felt uncomfortable. I have done a lot of romantic scenes with many other actors, probably much more romantic, and they were respectful to me.” Actor Shraddha Srinath tweeted saying she was privy to information about the incident since November 2016.

I have known about this incident since November 2016, when @sruthihariharan and I attended a talk show together and the talk of casting couch and other related topics came up. Shruti didn't take names that day but off camera she told us what happened. https://t.co/lo2lkN14H2

Responding to the allegations in an interview with a TV channel, Arjun vehemently refuted Hariharan’s claims and said, “When I got the script, there were more intimate scenes and I refused to do them. I respect the #MeToo movement, but such false statements can dilute it. Even now, I am responding because my silence will be misconstrued as an acceptance of guilt. I will file a case against Sruthi for her statement.”