The Tamil voiceover for this show is lent by Gautham Vasudev Menon who is donning the hat of a narrator for the first time.

Discovery Channel’s latest documentary, COVID-19: India's War Against The Virus, which is getting released today, comes at a time when the country is still battling the coronavirus pandemic. Extensively shot during the lockdown, the documentary is said to be shedding light on how technology is being used to combat the virus, and also on those working tirelessly behind the scenes to arrest the spread of this disease.

The Tamil voiceover for this show is lent by Gautham Vasudev Menon who is donning the hat of a narrator for the first time. “I got a call from Discovery and agreed straightaway. I got to dub it with Mahesh along with whom I’ve dubbed during the Vettaiyaadu Vilaiyaadu days. The concept of the documentary convinced me to step out from the safety of my house,” says Gautham, opening up about several topics, including the status of his films, through a video call.

What was it to be a part of a documentary about something as pressing and momentous?

It felt like a personal thing and that’s why I agreed to do this. I ventured out just to recognise the war we are waging against the virus, and talk about people in the frontlines who have done their part, what the statistics say, and what progress we have made.

Even the Chennai floods was captured as a moving documentary. What should we expect from this documentary?

There’s a lot of work that has gone into it, and I could figure this from watching the rushes. It’s not just a compilation of bytes. Painstaking effort has been taken amidst the lockdown to make this film. There are some great shots, and the film has everything from the PM’s speeches to conversations with the people working in the health department, and front line people such as the police officers, doctors and nurses. It has also covered the whole transport system that has gone into gridlock, and covers migrants too. Every nuance is covered and it’s put out in a manner where it leaves you with hope in the end. It’s telecasting at a time when we are in the middle of a war and I hope they come up with a part two of the documentary to tell everyone how we have won that war.

We know about your love for voiceovers but what is it like to offer your voice for a film you haven’t created?

I felt one with it. I was hoping that the script will take a personal narration approach instead of just an overall voiceover. This was done in a personal manner and I even get to say, ‘I, Gautham Vasudev Menon, am going to take you through India’s war against the virus’. I say this in Tamil obviously (smiles).

We see channels like Discovery and platforms such as Netflix, with whom you are working on a project as well, beginning to concentrate more on regional content.

We have always been on the map. As far as filmmakers that have come from here are concerned, I think it’s about time we were in all these platforms. Theatres are not going to be open about taking in every film... the small films don’t get noticed at all. The way I look at it, we were always there, but now we are flooding these platforms.

We have seen you get into mainstream acting in films like Trance and Kannum Kannum Kollaiyadithaal, and sing in films like Puppy and Takkar. Is this reinvention of your presence in the industry in a sense? 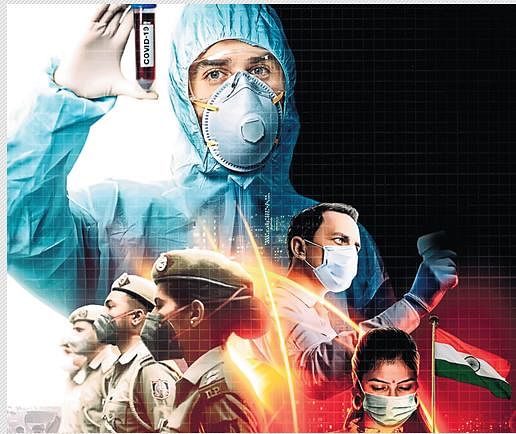 (Smiles) I don’t look at it that way. It’s just like how I write my scripts. I have no idea what’s going to come up and sometimes, nothing comes up. But I love the process. I don’t have plot points and I just let it meander as a river would. Whatever roles you have seen me playing are all that I felt like doing at that moment. I did Trance because of Anwar Rasheed (director) and Fahadh Faasil. I am a fan of Fahadh’s work and I have heard so much about Anwar’s work. It was a wholesome enriching experience to watch them at work. Kannum Kannum Kollaiyadithaal happened because Dulquer asked and there was a like-minded producer. For this documentary, I felt it would be right to be a part of it.

You recently released a song called Oru Chance Kudu single, a short film called Karthik Dial Seytha Yenn, and two singles from your upcoming film, Joshua Imai Pol Kaakha. The lockdown seems to have been productive for you.

These are unfortunate times, but silver linings have been there. I spent a lot of time at home. It’s sad that something like this has to happen for us to scamper home. The uncertainty is bothersome, as theatres are not opening and shooting too is not allowed. It’s all about safety right now. Whatever you write, you realise you cannot go out and film, so your writing gets changed to what can be done right now and I feel that it’s not good. That said, so much time has given me the space to know people a lot more.

What’s on your plate now?

Karthik... was an excerpt from a script that I was writing and I thought it could be filmed and put out. I want it to serve as a reminder and a prologue for a film that’s going to come up. I am writing that and I am waiting for a few things to fall in place. I also have something for Suriya and we are in alignment. Nothing is confirmed, but I hope it will be soon. I also have Joshua and Dhruva Natchathiram set for release. Both films have about a dozen days worth of work left. Post-production has been happening on full swing and we are working remotely.

Once the world returns to normalcy, how do you see the film industry being?

I think one big film here and in Mumbai will bring the crowd back to the theatre. That’s the passion that drove us to do films -- to put films out in the theatres. OTT is also a platform for people to put out different content and it’s a boon. Right now, everyone is seeing if we can film under safe conditions and a lot of discussion is happening on how safe we can make the sets. I don’t think it’s as easy as wearing a face mask and going to shoot. At the same time, we are hoping for some miracle vaccine.