‘Rocketry is a story that needs to be told’

... says Varghese Moolan, one of the co-producers of the Nambi Narayanan biopic

The first footage of Madhavan’s directorial debut, Rocketry: The Nambi Effect, released on Thursday, was greeted with a warm reception. It also gave us a glimpse of the cameos of Suriya (Tamil, Telugu and Malayalam versions) and Shah Rukh Khan (Hindi, Kannada, English versions). 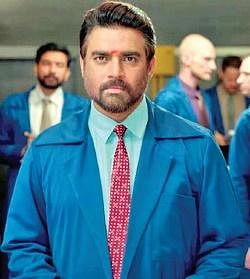 Touted as an epic chronicle of rocket scientist Nambi Narayanan’s life, the multilingual biopic co-starring Simran, Misha Goshal, and Ravi Raghavendran was four years in the making. Madhavan, Varghese Moolan and Vijay Moolan are co-producers of the film, with Prajesh Sen as a co-director.

Following the trailer release, Varghese Moolan spoke to us briefly about the impetus behind backing a project of this scale. “It’s our affection for the true story of a familiar figure whose stories we have all read about,” shares Varghese. “Besides, there still exist some misconceptions and theories about him among some. So we wanted to show who he really is and what he did for the country.”

Varghese added that making a biopic on Nambi Narayanan was to him a responsibility as an Indian citizen. “His life, the contributions he made to the country, his trials and tribulations, and what the country lost is something that we Indians need to know. It’s a story that needs to be told. At the same time, it’s also a story of others like him who do a lot for the country. We couldn’t think of a bigger and more encouraging opportunity than this.”The theatrical release date will be revealed in an official announcement soon.

Now we are on Telegram too. Follow us for updates
TAGS
rocketry nambi narayanan