Hyderabadis saw most films this year

As the year comes to a close, ticketing app and website BookMyShow looks back at what entertained India this year, from movies to plays, sports, events and music.

As the year comes to a close, ticketing app and website BookMyShow looks back at what entertained India this year, from movies to plays, sports, events and music. In 2017, millions of Indians reached out to BookMyShow to meet their entertainment demands, a report said. 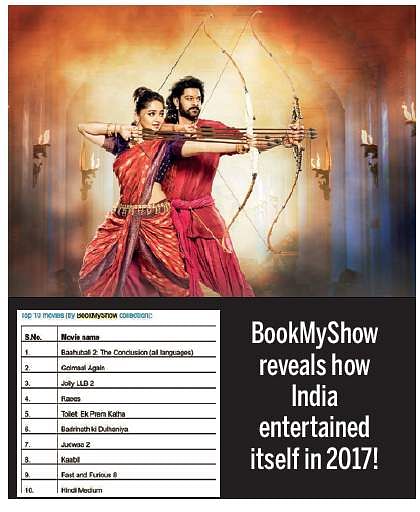 The data collected is from January 1, 2017 till December 8, 2017. Parikshit Dar, Director, BookMyShow said, “With mega blockbusters like Baahubali 2, mammoth events like Justin Bieber, Ed Sheeran, and classic productions like Mughal-e-Azam, this year the entertainment sector in India evolved and so did the audience.”

With over 1450 films that were listed on BookMyShow in 2017, it was clearly the year of Baahubali 2: The Conclusion with BookMyShow alone selling over 16 million tickets for the film which had consecutive run of 175 days at the box office! Following Baahubali 2, was Rohit Shetty’s Golmaal Again and Akshay Kumar starrer Jolly LLB 2. Here’s some more interesting facts and insights:

Stay up to date on all the latest Entertainment Telugu news with The New Indian Express App. Download now
TAGS
BookMyShow Mughal-e-Azam Baahubali 2