People can’t get away with such comments

HYDERABAD: It is obvious that actor Nagarjuna has gauged the mood of the public and on social media as he starts off on a serious note during the press meet of Rarandoi Veduka Chooddam in the city on Tuesday: “Like any of you, even I condemn such statements. I don’t think, any one should even digest such words anymore. I tweeted saying, “Dinosaurs don’t exist!” We have surpassed that era when people could say anything and get away with it.

Now, people scrutinise every word and do not spare anything. They stand up to call a spade, a spade,” he said. He was responding to the mood prevalent after all hell broke loose when actor Chalapathi Rao commented on how girls are good to sleep with. (See box)
The tagline of the movie - Ammayilu manasshanthi ki haanikaram,’. Isn’t this a sexist line in the first place? Nag recalls how one of his movies, Manmadhudu had a tagline ‘He hates women,’ but had a contrasting story line.

“It is just catchy dialogue to create hype, but when you watch the movie, there is nothing discriminatory or degrading. In fact, there is a dialogue towards the end, that says “Women should be treated like queens,” he informs.

In Telugu movies, predominantly, the actress character is confined to a damsel in distress or a girl mollycoddled by her dad or just a pretty girl who wakes up with blow-dry set hair. In reality, the girls have touched the moon and stars with their talent and hard work. “Baahubali has strong female characters which marks the beginning of a changed perspective.” 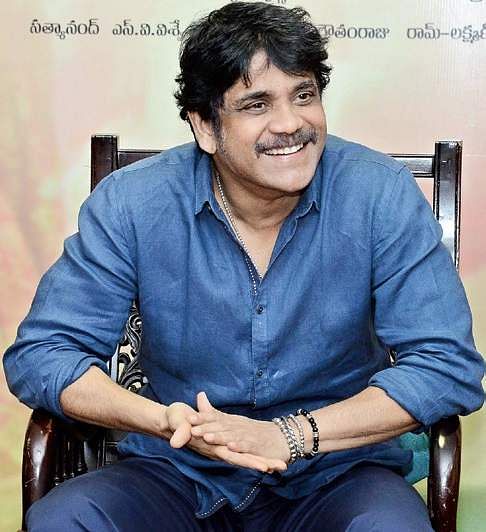 Nagarjuna believes May is a lucky month. It is the month two of his biggest blockbusters – Vikram and Manam released 31 and three years ago rsepectively. “Chaitanya has got used to Gautam Menon style movies where he had a great time riding bikes and hanging out with his girlfriend. He was not sure of this role, but I asked him to blindly follow director Kalyan Krishna’s words. I find a beautiful change in his acting. He even learnt the Godavari accent for the film. He has loosened himself. We ensured the father and son relationship in the film is just like way we are in real life. They say, guys get into form, once they turn 30 or may be it is also the Samantha effect. He is happy and it shows in his work,”he adds.

The doting father-in-law said he started sharing friendly repartee with Samantha from Manam days. “Back then, she used to call me sir, now she calls me mama,” he laughs out loud. Rakul’s dhol moments not just brought cheer to us but also the producer. “I asked her how she manages to play the dhol effortlessly. She said nobody can take out the Punjabi in her. Dhol is in her blood,” he quipped.

Members of Movie Artists Association (MAA) issued a public apology on behalf of Chalapathi Rao. “His statements weren’t intentional and was a slip of tongue. He accepts his mistake and is apologetic about the same. This incident is a lesson to the association as well. It will be ensured that derogatory remarks will not be tolerated by us in future. We have also issued warnings to those who have done the same earlier as well. “Anyone who makes demeaning statements about women again will have their membership cancelled,” said Sivaji Raja, President of MAA.