Ungarala Rambabu is a testament to Sunil’s poor script selection and lack of audacity in terms of his performance.

Comedian-turned-hero Sunil has been making continuous efforts to secure a hit to his name after tasting a marathon of duds. He has joined hands with acclaimed filmmaker Kranthi Madhav for Ungarala Rambabu. Having seen his recent outings, one has to walk into a theatre with thoughts wondering how unique does the story seem. A film which was supposed to be rib-tickler ends up as an obsequious fare.  Sunil is Ungarala Rambabu, a staunch believer in astrology and is so smug in his superstitious notion that he attributes all his success to a fake godman Badam Baba.

He sports unusual outfits with weird colours every day to work. Director Kranthi Madhav tried to show how Rambabu’s character is coping with the financial loss and how his beliefs get him back on track provided he marries a girl born in an unusual (chikubuku) star. What we get for the rest of the film is an emotional Rambabu’s struggle to win his love.

It’s natural to expect parodies in a Sunil-starrer and yes, we do see him mimicking Baahubali’s Shiva Linga act, Chiranjeevi’s iconic veena step, Mahesh Babu’s funny dance moves from Brahmotsavam. There are some scenes which definitely test your patience. One such aspect is where Rambabu overhears Savitri (Miya George)’s conversations with her friend, determined to spring surprises and makes her relive the same day three times in Dubai.

Making it more chaotic, there comes an irritating room service man who asks her ‘How was your first night’ during her three-day stay at the hotel. Oh wait, Rambabu too feels complacent if he gets to meet someone called Subba Rao and doesn’t spare an opportunity to click a selfie with him in memory of his late father of the same name. 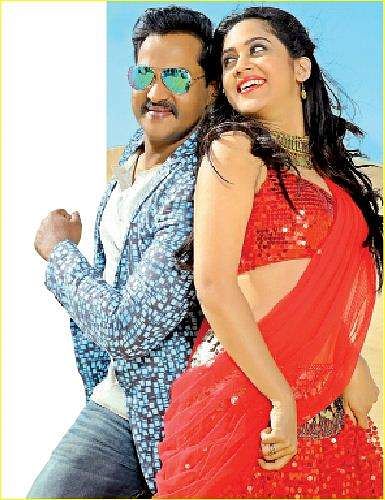 In the second hour, the action shifts to Chegune Pugonde Vanam, a strange little communist village of Kerala where people speak fluent Telugu as if it is their official language. The director takes the commie and capitalistic ideology way too seriously and tries to add more weight with terms like humanism and struggle for equality. One shouldn’t expect high technical values or strong storyline for films that are seemingly dullard and imbecile. With such a lackluster screenplay and the star cast who give all rigid expressions, there is nothing much to root for Ungarala Rambabu.

From incorporating silliness to trying out parodies and choosing the communist ideology to humanism, Kranthi Madhav has tried everything to woo the audience. Even when the story gets deviated from the plot, surprisingly, Kranthi couldn’t arrive at one good entertaining scene.The only respite in this snoozefest comes with some graceful performance of Prakash Raj. Although the story doesn’t allow him to give his fullest, he manages to pull off a refreshing act for a few minutes. All said and done, Ungarala Rambabu is a testament to Sunil’s poor script selection and lack of audacity in terms of his performance. You can give this one a miss!

Stay up to date on all the latest Entertainment Telugu news with The New Indian Express App. Download now
(Get the news that matters from New Indian Express on WhatsApp. Click this link and hit 'Click to Subscribe'. Follow the instructions after that.)
TAGS
Ungarala Rambabu review Miya George