Every show I do deserves my best, says popular TV anchor Sreemukhi

As Hyderabad Express caught up with her minutes before she was off to host the show, Comedy Nights on Zee Telugu, Sreemukhi spoke with impressive sharpness.

HYDERABAD: Sreemukhi is a burst of energy with a child-like lucidity when she’s on camera. And off-camera in the solitude of her greenroom she was a vision of calmness and maturity. As Hyderabad Express caught up with her minutes before she was off to host the show, Comedy Nights on Zee Telugu, Sreemukhi spoke with impressive sharpness. Currently one of the most-sought after anchors in the TV fraternity, the 24-year-old isn’t the average youngster. Her entry into the industry which she now calls home was but an afterthought.

A dentistry student from Nizamabad, Sreemukhi was noticed by a TV crew when they were shooting an episode of a cookery show with her mother. When she was asked to try out hosting, her father wasn’t keen on letting his daughter - who was studying to be a dentist - turn to the entertainment industry. But as fate has it, what started for Sreemukhi as just the whim of a mother turned into her lifeline. “It has been six years since I started on TV and will complete seven this September.

I started out as an outsider who knew nothing of the industry, but since I started there has been no looking back or stopping,” gushes the actress. She also adds, “When I entered the industry I was possibly just a girl-next-door who could at most be a co-host. But Zee Telugu trusted me with an entire show and believed that I could handle it myself. And I will forever be indebted to them for letting me reach my full potential.” The arbitrary decision now has given her four shows on three different channels and over 3500 episodes to her credit in all.

All said and done, it takes a mountain and a half to be as successful as she currently is. At an age where most youngsters are making memories Sreemukhi is happy entertaining people - no matter how much of hard work that means. “I do both daily and weekly shows and more often than not I have to work 26 days a month at erratic hours. I’m not complaining! I enjoy my work but sleeplessness and the tiredness catch up sometimes.

Every show expects my best and I’m now known for being loud, energetic and active. And if my fatigue shows even a little bit, it dips the morale of the entire set. It is a huge responsibility and it does trouble me sometime.” And as it turns out, Sreemukhi is still groping her way around keeping her sanity amidst the crazy schedules. “I’m still trying to find a way that might help me keep sane. However, if I really want to unwind, I go home - 1 am, 2 am… whenever that is - I watch a movie on Netflix. That is possibly the only thing that diverts me and makes me realise, ‘You’re a normal human being,’” chuckles Sreemukhi 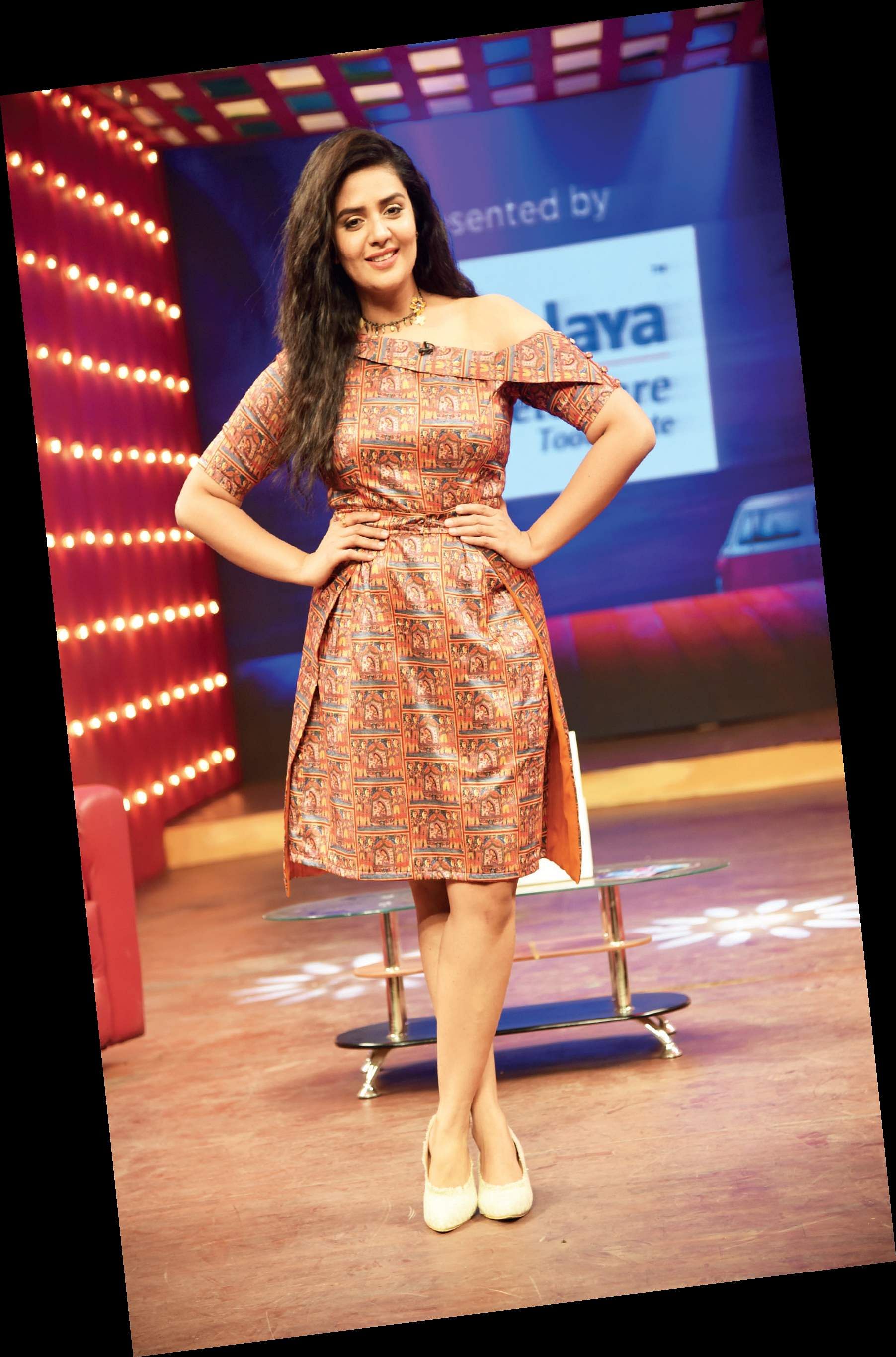 When watching a movie itself is a thing to look forward to for busy bee Sreemukhi, going on a vacation is almost a fantasy. Ask her when was the last time she went on a holiday she says, “I guess I went to Goa over the weekend recently but it barely felt like a vacation!” So can she ever take a break to unwind? “Taking a break scares me.

I’m really young in the industry and staying home doing nothing really freaks me out. It’s not because I’m afraid someone will replace Sreemukhi, but staying away from the audiences isn’t something I’m used to. And I don’t think I’ll ever enjoy taking too long a break from TV. But if I ever were to, I would do so just to completely focus on getting back into shape and getting fit,” she says

While Sreemukhi has her own fan-following to tend to, she also gets quite some love as one half of the hit pair Ravi and Sreemukhi. Hosting together on more than one channel, the pair have become synonymous with each other and are known for their infectious energy and impeccable chemistry. All of which didn’t happen overnight “When I started out, I was paired with Pradeep and he was already a star then. I was just a cohost.

We gelled but it was just all fun. Then when I got paired with Ravi for Super Mom, we had a lot of work to do together. After about 25 epsiodes with dance entries, romantic songs, fights and the works, we found our groove and the chemistry just clicked,” shares Sreemukhi. “With Ravi, because our personas are similar - both of us are loud and energetic - it gave me an opportunity to show that side of mine. With Pradeep, I would be calm because he himself is a calm and composed host. I have to admit, it is because of Ravi that my mass angle that the audience love is uncovered,’ she gushes.

And when there is chemistry there are rumours. Sreemukhi is no alien to rumours about her and Ravi and their possible romantic involvement. But she is unfazed. “I guess 10 years from now, it would be worth talking about that there was once this hit pair Ravi and Sreemukhi; like how there is Shah Rukh and Kajol. If we are being talked about because of our work then I don’t mind being Shah Rukh and Kajol for the tabloids,” quips Sreemukhi. However she also goes on to clarify, “Ravi and I practically spend most of our time together and for people working 26 days a month for over 15-16 hours a day, there’s not much else to talk about or do besides work alone.”

The future
Sreemukhi who did venture into films briefly is now focussed on television for the time being. Currently hosting Comedy Nights with Anchor Ravi, Sreemukhi also has a new show coming up for the same channel. “As long as television finds potential in me to keep hosting and keep doing what I do best, I will keep going and I will always be grateful,” says Sreemukhi

Now we are on Telegram too. Follow us for updates
TAGS
Comedy Nights on Zee Telugu Sreemukhi