My life may not have enough twists for a biopic: Chiranjeevi

Megastar Chiranjeevi, who is always busy with his work and other commitments, unwinds with us about everything,  from being detached to success and failure to how his heart fills with gratitude towards his fans and the industry for what he has gained

Decades have passed; Chiranjeevi’s enduring appeal though remains untouched. A quote, an update about a film, a passing anecdote… His innumerable fans still wait with bated breath and cling on to every word and action of the Megastar. In gloomy times of Covid-19 and the subsequent lockdown, my spirits were instantly lifted to learn that Chiranjeevi had accepted my invitation to have a telephonic conversation. What’s more, the star is in a reflective mood as he engages on several aspects, including the joy of being an actor, the support of his family, and of course, the end of his political journey:

How is it that brand Chiranjeevi continues to hold sway?
I’m 64, but have realised that age is just a number. The love and affection showered by the audience and my fans keeps me in high spirits. How I look is a reflection of this.

You seem to have really taken to social media of late.
Till recently, I didn’t feel the need to make my presence felt on social media; I preferred to share my thoughts through a video byte, press note or a press meet. Certain situations though demand an instant response. Social media has become a platform for me to express myself on topics that could instantly help people across the country, especially during these trying times. I understand it has its share of negativity, but my spirits aren’t deterred. I look forward to sharing key moments of my life with my fans.It’s safe to say that you have seen your share of ups and downs, both professionally and personally.

What lessons have such extremes taught you?

Initially, I was too attached to the success or failure of a film. It took me 20 years to realise that I hold accountability for neither. I still remember one incident that happened after the release of Kodama Simham (1990) and Pratibandh (1990). Friends from the industry visited to see how I was celebrating the stupendous success of both films, but they were shocked to see me dressed casually in a lungi, reading a book. I behaved simply like a mother of a newborn. Each film is like a baby, but I have learned to balance my emotions. Today, I am immune to success and failure.

It appears that you have followed in the footsteps of the late filmmaker Dasari Narayana Rao in being looked at as the big brother of the industry.

I don’t see this as an extra responsibility. My heart is full of compassion and this is my way of giving it back to the industry. As a rank outsider, I have earned love and appreciation from the audience.

My father was a government employee but I chose to pursue this career in 1976. It was a powerful, life-changing thought, which has had a positive impact on our entire family. Today, that single thought has resulted in a family which has produced personalities like Pawan Kalyan and Ram Charan among others. I am now the nucleus of this brotherhood, and protective of it. When Naga Babu faced hardships, Kalyan and I stood by him. My brothers also supported me in my political endeavours. Even after I stepped out, Kalyan continues. We like each other, and will stay together through thick and thin, forever.Fame… money… this industry has given me everything. It’s important that I be thankful to it, and the least I can do is to stand by it no matter what. It’s my way of paying it back. 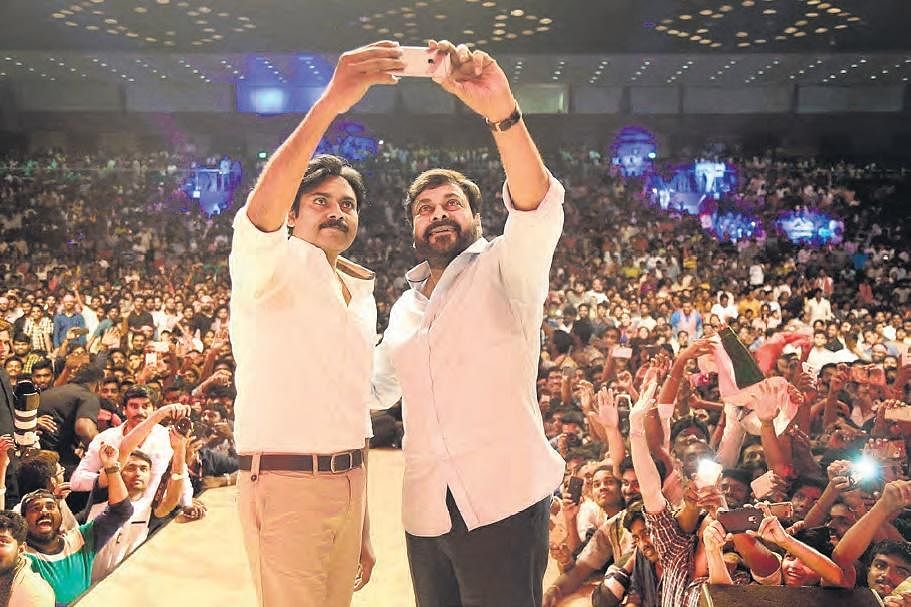 You have also completed four decades of married life recently.
Marriage is all about giving and taking – it is all about complementing each other, building mutual respect, and making adjustments. My wife Surekha is an embodiment of all these qualities, and her contribution to our family has been remarkable. She is at the heart of it all. She has taken care of everything and kept the structure glued. She is simple, and has a pure heart. Even today, she takes care of my mother (Anjana Devi). I am thankful to her for everything.In addition, as the daughter of the late Allu Ramalingaiah, she’s well-versed with the ways of the film industry, and her foray into film production is a natural consequence of that.

Was it also natural that Ram Charan turned a hero?
Charan is passionate about cinema. He loves his fans and carries my legacy forward in the industry. He has seen me from close quarters and inculcated a lot of useful qualities. He’s one of the best film producers I have worked with. When we went to shoot the war sequences of Sye Raa Narasimha Reddy in Georgia, he not only provided cash of 100-200 dollars for each member of the unit but also provided accommodation to all of us equally. Which producer takes care of people like this?

As an actor, I never wait for an advance, and have, for long, been taking my salary only after I finish work on a film. Actor Jeetendra once cautioned me about this, but I told him that actors should prioritise the welfare of a producer. Charan does the same too; I wonder if another actor in this generation does!

It’s the season of biopics, with the late NT Ramarao’s life recently getting made into a film. Would you like a film getting made on you?

My journey has given hope to many an actor. Every aspiring actor wants to be a Chiranjeevi, and my heart feels so warm just thinking about it. I am working on my autobiography and planning to bring out a documentary with personal anecdotes. As for a biopic, I am not sure my life has enough twists to make it interesting.

You play an ex-naxalite in your upcoming film, Acharya. It seems quite far removed from the sort of films you are known for...

The film is a socio-political entertainer that depicts a man’s fight to conserve natural resources. It’s an intense role, physically and intellectually. Like Koratala Siva’s earlier commercial outings, Acharya too drives across a strong message without sounding too preachy. Charan is playing an important role in the film too, and I must thank director SS Rajamouli for being accommodating and allowing him to do our film amid RRR’s schedule.

You have always shown interest in working on remakes. Even recently, you acquired the remake rights of Malayalam film, Lucifer.

I don’t distinguish a project in terms of whether it is an original script or a remake. I give everything to ensure that a remake improves on the original. Rajinikanth’s Mannan and my film, Gharana Mogudu, were both remakes of the Kannada film, Anuraga Aralithu; we began shooting at around the same time, and had a healthy competition. We made a few notable changes to the script, and Gharana Mogudu turned out to be a blockbuster. It was the first South Indian film to collect over `10 crore at the box office. And yes, adding to what you said, I have done the Telugu remakes of Ramana (Tagore), Munna Bhai MBBS (Shankar Dada MBBS) and Kaththi (Khaidi No. 150) and all these films have fared better than the original one.

Of course, it’s not that every film we remake turns out to be a hit. I have one-two failures too. Anil Kapoor remade my films, Attaku Yamudu Ammayiki Mogudu and Choodalani Vundi, but they were hardly as successful. I think Lucifer fits my personality. Charan has suggested that I work with Sujit (director of Saaho); the latter has suggested some changes to the original script. We will figure it out over video calls.

As a star, it’s hard to control perceptions. What do you think people’s biggest misconception about you is?
I think many are upset with my decision to withdraw from politics. The truth is, I don’t think politics is a place for honest and sincere people who want to win with hard work, vision, and an action plan. I’m saddened that people couldn’t choose honesty over corruption. I have no regrets though. I am just worried that politics is driven by greed and money. All said, I achieved quite a lot during my tenure as the Minister of Tourism.

What ambitions does the Megastar now harbour?
Life is an ocean; I think I have barely covered any space. I am today one of 20-30 superstars in the industry. I am proud that Ram Charan has been doing really well; in my 40-year-old career, I never got the opportunity to act in films like Magadheera and Rangasthalam. I am a constant learner and have always wanted to learn new languages. I am surprised to see my grandchildren speak Spanish fluently. I wonder why I can’t try to learn at least four words a day. However, if you point out that I have earned the love of the people and ask me if that’s not enough, I would say, “Yes! I have achieved everything in life!”