HYDERABAD: He had taught generations of Telugu singers. However, most of them remember the legendary SP Balu sir not just as a singer, guru, mentor or role model, but also as a funny man who always had something to chuckle about. While one singer recalled drinking a magic potion that soothed her throat, another remember how he enthusiastically voted for him to help him win a prestigious national title. The common thread in all their memories is that Balu garu made them all feel special and gifted. No wonder,  he is loved by the musical fraternity so much.

He asked me if everything was alright
I was a pre-finalist in  MAA TV’s Paadaalani Vundi and when he heard my song, he said, ‘Nee voice halwa tinnanta hayiga vundi. Nee gontulo gamakaalu baga odugutunnayi”. I also met him at Rao Bala Saraswati birthday celebrations in 2019. I was sitting near his feet and he was recalling about his initial days as a newbie singer. I got emotional when he was talking about it and he stopped to ask if everything was alright. That kind of a personal touch is what only SP Balu garu can give.
— Manasa Acharya, Singer

‘What are you doing in media?’ he asked
In 2012, I met him at Sarathi Studios and and he heard my song Bhaavayami Gopalabalam.’ He appreciated and asked me, “What is such an amazing singer like you doing in media, I say?” with a lot of emotion and conviction. He inaugurated my Annamacharya Keertanalu album and his presence was always comforting.
— Swapna Sundari, Singer and TV host

‘Why did you post that in Facebook,” he asked
When I met Balu garu in Australia after I first met him at a talent show, I was sure he would not recognise me. But surprisingly, he acknowledged  my presence. I had, in fact posted a photo in Facebook with him where I was looking bedazzled like a fan girl and he even called me to ask why I was looking at him that way. I told him it was literally like meeting the God of Music.
— Madhupriya, Singer 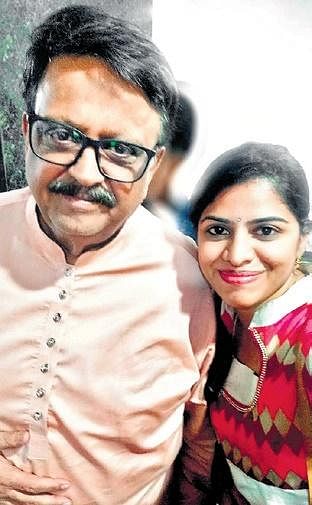 He introduced me to a magic drink called Madhuram
Once I met him in the studio and when he heard my hoarse voice (I was suffering from a  throat infection), he  called his assistant and asked him to fetch a flask from he poured something which looked like a magic potion and he said it is  Madhuram. It was lukewarm water with a drop of honey and my throat really felt better. I try the same technique whenever I have a throat ache. Balu garu introduced me to his personal blend called Madhuram.
— Kaumudi Nemani, Singer

I voted for you, he said
When I came back to Hyderabad after winning the Indian Idol season 4 title, he said, “I also have a part in your success as I voted for you on  my phone.” That just made my day, week, and life. I shot with Balu garu and director K Vishwanath garu for a real estate commercial in Chennai for three days. Watching them converse was like a lesson in human relationships. I travelled with him for a month and performed alongside him on many stage shows in the US and the UK. I am one of the few singers who has interacted with him at such close quarters. He said he admired how I could sing and dance at the same time with so much gusto onstage. Taking the same flights, sitting with him on the same breakfast table and even partying with him shall always remain special.
— Sreeramachandra, Singer