While continuing to follow the state guidelines for social distancing, here are organisations working on the field for the cause, you can consider aiding.

CHENNAI: Loss of livelihood, lack of sanitary kits, depleting food supplies and risk of homelessness — the 21- day lockdown and looming uncertainty over the pandemic has rendered helplessness especially among those who bear the burden of carrying marginalised identities.

To curb existing inequalities, provide relief measures and some respite to the LGBT community, NGOs, collectives and citizen-led initiatives have come together, reminding the society of its collective responsibility of lending a hand to the vulnerable in times of crisis. While continuing to follow the state guidelines for social distancing, here are organisations working on the field for the cause, you can consider aiding.

In collaboration with the Chennai City Police, Sahodaran — an NGO that works for the LGBTQ community — and Thozhi — a registered community-based organisation that aims to empower transwomen — have joined hands to provide relief material, food kits and everyday supplies for transgender persons in different pockets of the city. “People often ask why there is always a ‘special’ emphasis when it comes to relief for the transgender community.

If a crisis strikes you, you have a family to fall back on, but for a major population from the trans community, that’s not the case. They live with a lot of stigma and discrimination and this is the least we can do,” says Jaya of NGO Sahodaran. In their campaign to provide basic provisions — rice, oil, dal, medicines, washing powder, among others — several celebrities and trusts have come forward to support. “Our donors include Ragava Lawrence, actor; Tanya Mallavarapu Reddy, founder, Youth Feed India Initiative; Vedika Agarwal, founder, Yein Udaan Trust, and A Sakthivel, managing director, Olympic Ware House Pvt. Ltd.

We are reaching out to more donors to provide aid to as many transpersons as possible,” says transgender activist and campaign coordinator Sudha. As most from the community are daily wage-labourers, the COVID-19 crisis has hit them hard. “For days, they have been unable to earn, to either buy food or water. With the deficit of funds they are unable to take care of their medical needs as well,” she says, adding that so far, over 400 transpersons have benefitted from the campaign. “We are also trying to procure funds for medicines of those transpersons with diabetes, BP and other ailments, but currently the focus is on providing everyone with basic staples for survival,” shares Sudha. To donate, visit: http://impactgu.ru/transgender-community-thozhi-chennai , or call: 9500057212

Chennai-based start-up PeriFerry, a social enterprise that facilitates change and equal employment opportunities for the transgender community has been working with the government — identifying the groups and individuals (trans and intersex) who are in dire need of relief funds and provisions. The idea, Neelam Jain says, is to support the government, act as an intermediary and ensure that the schemes set in place for the transgender community get implemented in the grassroot level.

While The National Institute of Social Defence (NISD), has promised to provide immediate relief funds for trans and intersex persons, availing the benefits might require the individuals to own an Aadhaar, ration card and other documents.“Some might not have a ration card or might have a new identity in their recent IDs. We have been trying to facilitate and provide aid with queries too. We are identifying people in need of food, medical supplies and groceries. So far, PeriFerry has enabled 300 people from the community to avail provisions,” says Neelam. For details, visit Instagram page @PerriFerry; mail: connect@ periferry.com or call 9789923448

Kanaga, a transgender activist and campaigner, along with Siva and Sankari of Nirangal, an NGO working for social, economic, political and human rights for marginalised communities in Tamil Nadu have flagged a campaign to raise funds for close to 300 transgender persons for basic provisions like food, oil, salt, drinking water, masks, basic medical supplies and soap so that they can also stay home and stay safe. 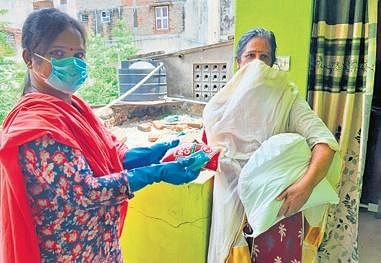 ‘With most people from the community working in the unorganised sector, the trans community is now facing a direct threat to life with little to no welfare benefits. It is also important to stress here that most people from the community lack government- issued identity cards, which makes it hard for them to access any social benefits announced by the state,’ reads the campaign note on Milaap. “This is a collective effort that stemmed from a WhatsApp conversation.

As of now, we have collected around `8 lakh, distributed provisions and facilitated bank transfers to over 120 people. The state should also implement schemes from the grassroots level and upwards. Our campaign is covering trans men, trans women, intersex people, nonbinary and other minority identities within the trans umbrella,” shares Kanaga, a transwoman. For details, https://milaap.org/fundraisers/support-kanaga

Orinam, a support group for people who identify themselves as lesbian, gay, bisexual or transgender and for their family and friends is ensuring people from the LGB community are provided with support. “The lockdown has impacted many working-class queer and trans people, especially those in the informal labour sector and others whose employment and/or income has been halted as part of the pandemic control measures. Several fundraising efforts are active for transgender people. We didn’t want to duplicate them. So, we decided to raise funds for cis lesbian, gay and bisexual people impacted by the pandemic, with a focus on Tamil Nadu,” says Felix, volunteer-cum coordinator at Orinam. To contribute, write to orinam. net@gmail.com or visit Facebook page orinam.net

Transgender rights activist Grace Banu has taken it upon herself to help trans persons from rural areas in Thoothukudi, Tamil Nadu. “Thoothukudi has almost 15 transgender households and every house has as many as 10-12 members. Some are even affected by HIV/AIDS. Many are also dependent on begging to meet their daily needs. So, we are trying to raise funds for at least 150 transgender persons for their basic provisions,” she says.

Now we are on Telegram too. Follow us for updates
TAGS
Coronavirus Lockdown Covid-19