Flowers and bark of Mahua trees are extensively used in Ayurvedic medicines. 'Mahua' is also an alcoholic drink made out of flowers of the tree and is a popular beverage.

MADHYA PRADESH: For the uninitiated, mahua shrub has a sweet smell; its taste is fruity and heady. “It’s converted into the best drinks indigenous to India,” says Felix Padel, an anthropologist who has worked in India for several years.

In Madhya Pradesh the mahua tree is found in abundance in dense forests and is a chief source of livelihood for tribal communities.

This season, mahua flowers have brought in a fortune for them even as they got stuck in their rural homes because of Covid-induced lockdowns.

In the tribal belt of Madhya Pradesh’s Hoshangabad, scores of rusty forest dwellers are celebrating their Mahua flower harvest: for the first time, they have found government reaching their doorstep and arranging purchasers to buy the flowers in bulk at a minimum support price, like in the case of other crops.

Mukesh Dhurve worked as a daily wager as he wandered to neighbouring districts and beyond. Confined to his home post lockdown, he saw a ray of hope emerging from mahua shadows.

He sold sacks of mahua flowers collected from the forest skirting his Jalikhedi village and earned Rs 3.5 lakh in a month! 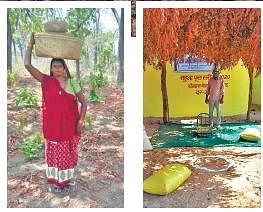 “I never saw so many currency notes. A registered trader has paid an amount equal to my three-year wages as a labourer. I have saved a lot since I didn’t have t o go outside my village,” Dhurve exults. Similar are the stories of Ram Das, Shakun Bai, Godu Lal and others – all of them having earned at least Rs 50,000 by making full use of their forest with government encouragement.

Hoshangabad District Forest Officer Ajay Pandey says mahua flower cultivation this year is much higher than in the previous years.

The mahua tree is also called the tree of life of tribal India. From food to animal fodder and even fuel, every part of the tree can be used.

Its flowers and bark are extensively used in Ayurvedic medicines. mahua is also an alcoholic drink made out of flowers of the tree and is a popular summer drink.

The government plans to sell it as a mildly alcoholic drink – think of Breezer, if you could. So, this season, the forest department took up the task of getting rightful prices to tribals.

It opened 15-20 procurement centres to purchase the produce directly from the tribals. “Around 500 quintals were procured. As the plucking was on a much higher scale, we faced the storage problem,” says Pandey.

The department then got big traders to purchase the flowers at Rs 35 per kg MSP or higher directly from tribals. “We worked with the district administration and police to ensure their unrestricted movement to tribals’ doorstep during the lockdown,” says Pandey.

Registered traders armed with weighing machines descended on the villages and purchased over 20,000 quintals of the produce at prices not lower than the MSP, which has resulted in a big sale of `8 crore, out of which % (around `8 lakh) has been deposited by the traders as Access Benefit Sharing to the Biodiversity Fund under the provisions of the Act.

“Some unregistered traders who bought the produce much lower than the MSP have been booked and their vehicles seized,” said Pandey.

Not only did the forest department ensure direct purchase of the produce, but also provided mahua collection nets to tribals in at least six villages under the World Bankfunded Green India Mission.

This has resulted in the collection of better quality produce that fetched prices ranging between Rs 40-45 per kg. The forest department now plans to replicate the mahua success with other forest produce, including mahua seeds, Kalmegh, amla, chironji, bael, harad and baheda in the coming months.