The South Division has 17 police stations, and Rohini has asked all the police officials to start taking care of the stray dogs and train them.

BENGALURU: Know who is going to be the watchdogs for police stations? The strays. And thereby hangs a ‘tail’. It was not a stray thought that prompted the Bengaluru South Division launch this new initiative. A brainchild of Deputy Commissioner of Police (South) Rohini Katoch Sepat, the police personnel of South Division have now been ordered to feed and look after the strays loitering around police stations so that they can be trained by the police dog squad experts for their new roles. But the strays won’t take over the roles of the canines in the dog squads, but will guard police stations and accompany police patrols on night rounds.

The South Division has 17 police stations, and Rohini has asked all the police officials to start taking care of the stray dogs and train them. “There are at least about 50-60 dogs in total who are mostly outside the police stations wandering around. Many residents come and feed them and take care of them. Now, we want to do our bit by doing the same. 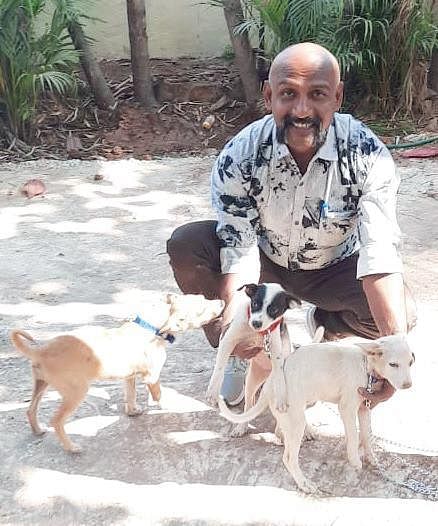 I have asked my officials to feed the strays and we are also going to give them basic training -- like obeying commands -- so that we can even use them as guard dogs,” Rohini told TNIE. “The police go on night patrols. They can take these dogs with them, which will drive in a sense of fear among miscreants,” she said. Most are puppies and the police have already started giving them basic command training. “Commands like ‘sit’, ‘stand’, ‘stay’, ‘jump’ are being taught and many have already started learning. Slowly, we can go forward with other commands,” said Rohini.

Strays are low-maintenance, easier to care for, says DCP

“They are getting into good shape,” said Rohini, adding, “Stray dogs are of low-maintenance and we can easily take care of them unlike the exotic high breed. Some of the dogs we train will even be chosen for the dog squad teams,” she said. This apart the DCP has also asked the officials to ensure that the dogs are vaccinated on schedule. “We have roped in two veterinary doctors who are carrying out the vaccination process. Some animal rescuers are also visiting the stations and taking care of the dogs,” she said, adding that the dogs are fed and sheltered by the police themselves. Shivakumar P, Kumarswamy Layout Police Inspector, said, “We have made kennels for them.

Training is also being given to them to behave with the public when they visit police stations. After a while they will be trained by the dog squad teams to identify offenders. When the public sees that police are taking care of stray dogs, they too will come forward to adopt strays.” Priya Chetty Rajagopal, animal lover who had started a petition “PLEA” (Police Lease of Empathy For Animals) ,was delighted with Rohini’s effort. “I received a message from Police Commissioner Bhaskar Rao saying that they have started the initiative and I was very overwhelmed to see that.”