A group of lawyers played a key role in putting together the logistics of identification and facilitated the migrant movement.

BENGALURU:  It was an incredible, once-in-a-lifetime opportunity, that 185 migrants, including 29 children, from Chhattisgarh got on Thursday. Thanks to the efforts of National Law School University of India (NLSUI) alumni, supported by a few NGOs and Delhi-based lawyer, Ajay Bahl, they flew on an all-expenses-paid special Indigo flight from Kempegowda International Airport to Raipur in Chhattisgarh.
Masons, construction workers, the unemployed, railway porters from Bengaluru, Tumakuru, Hassan and Hubballi were among those on board an aircraft for the first time. They had gathered at the Tennis Pavilion on Palace Grounds on Wednesday.

Three workers from Kolar got lucky when they got a midnight call to get on board, in place of those who could not make it. NGO Mercy Mission facilitated their travel by car from Kolar to KIA, for the 8am flight. Tapeshar Singh (18), a native of Balrampur in Chhattisgarh, who joined as an operator at an engineering firm in Kolar in early March, told TNIE after the flight reached Raipur, “I still cannot believe it. 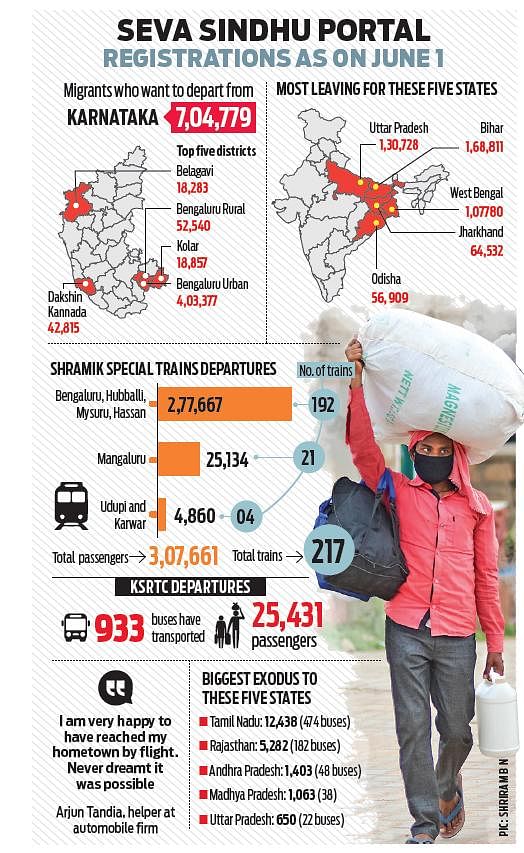 My company shut down and I was sitting in my room for the past two months, wondering if I would ever go home. When I got a call, I packed my stuff in minutes and rushed to join them. It felt so good sitting on a flight.” Arjun Tandia, who join as helper in an automobile firm in Bengaluru, said the opportunity came as a lifeline. “I am very happy to have reached my hometown by flight. Never dreamt it was possible. My friends in Bengaluru were earning up to Rs 16,000 and getting free food and transport, so I decided to join them.

Many times, I tried to leave by a migrant train but never got my turn.” Talha Salaria, who was involved in organising the trip said, “This is the fourth flight for migrants organised by the alumni, and the first from Bengaluru. After we pooled in money for the first flight from Mumbai to Jharkhand, support poured in from all quarters,” she says. “We decided to organise 10 such flights in three weeks, under our project ‘Mission Aahan Vaahan’.” Behl, a New Delhi-based lawayer and co-founder of AZB Partners, came forward to sponsor it in his personal capacity, Salaria said.

Tanveer Ahmed of Mercy Mission said a grand dinner was organised on Wednesday night for the migrants, who were brought by buses and other vehicles, near one of the parking lots at KIA. They were accommodated for the night by the airport authorities. The group of volunteers, including Arvind Narrain, Aarthi Chellappa, Shreyas Jayasimha, CK Nandakumar, Sheahan Verghese and Salaria, worked with other groups to ensure the migrants were flown back home. Partnering NLSUI alumni are Mercy Mission, S A Hussain-led ILoveBlr Trust, United Sikhs, Bangalore Media Foundation and several individual volunteers.