The inspiring Tumakaru woman who has given sight to 600 people

Tumakuru woman gave the gift of sight to 600 people

TUMAKURU: She is doing her best to help people regain their vision. On the day of her daughter’s wedding reception too, despite societal frowning, she responded to a call and went to collect corneas from a dead person.

Committed to the noble cause of eye donation, Latha Narayan KN of Madhugiri town has collected 608 corneas and given sight to as many persons indirectly since 1991. What motivated her was that when her father-in-law passed away during 1990, his corneas could not be collected due to a lack of experts in Madhugiri at that time. And then she decided to acquire the skill of removing the cornea.

Recalling her daughter’s wedding reception on November 1, 2015, she says, “On that day, I got a call. Many opposed my going since it meant going near a dead body which was considered inauspicious, especially since we were going to celebrate our daughter’s wedding. But my husband gave the go-ahead as it meant giving sight to two blind people.”

As soon as she gets a call, she rushes to the spot and takes the relatives into confidence as they will be in mourning. There have been instances of resistance. But she meets all these challenges. Latha leads by example. All her family members have pledged their eyes for donation. Her mother-in-law Manikyamma passed away on April 18, 2016 and her cornea was donated. It takes about 20 minutes to remove the corneas and they are placed in a preservation box before sending it to Narayana Nethralaya’s Dr Raj Kumar Eye Bank in Bengaluru. 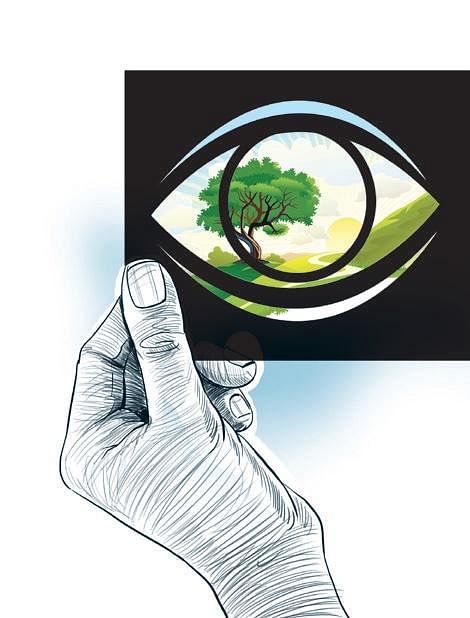 “Tippeswamy, a school teacher in Madhugiri, had lost one eye in an accident. We referred him to Nethralaya and now his sight is back with the cornea grafting. I feel happy for him and it gives me a sense of satisfaction,” Latha says. Like him, two more people in her town got their sight back.Having undergone training and having experience of over three decades, Latha is today an expert. She has even got her son Varun K N, an MBA who looks after the family business, trained in cornea collection at Narayana Nethralaya. Though she secured first class in SSLC and PUC, Latha could not pursue her ambition of becoming a doctor. Her father P V Sathyanathan is a traditional doctor.

But she imbibed his skills and wanted to serve society. She joined many women NGOs and served at the helm of affairs and ensured that lakhs of people both in Karnataka and Andhra Pradesh pledge their eyes through her motivational skills. Wherever she attends functions, she gives a talk on the importance of eye donation.  Eye donation is an act of donating one’s eyes after his/her death. It is totally voluntary. There is a severe shortage of donor corneas available in the country for transplantation because the number of people awaiting corneal transplant is far greater than the available donors. Unfortunately, several myths surrounding organ donation may be driving away potential donors. Latha understands this. She says, “We require 30 lakh corneas to free India from blindness and if every dead person’s corneas are collected, the goal can be achieved within no time.”

For the cause of the blind, Latha goes the extra mile. She has helped three visually challenged women get musical instruments as they are good singers. She has won many accolades, including the North Delhi Cultural Academy’s award and the District Rajyotsava Award.  This expert cornea collector has other hobbies. She is good at carvings on the soap, chalk and vegetables and other craft,  which she attributes to the skills imparted by her mother P S Sumithra of Hemavathy village in the neighbouring Andhra Pradesh. Again, her latest eye collection was at Agali village in AP.

“I have seen Latha working on this mission tirelessly for the past 15 years. Whenever I get information, I pass it on and she goes to those houses and collects the corneas. Convincing the family members who would be grieving while collecting the cornea is not an easy task,” says Dr Srinivasa L, history lecturer.
Latha gets calls from various people. Once she got a call even from an NRI. A Canadian had called her one midnight about the death of a relative suggesting to her to collect the cornea.

EYEWAY
Eyes are one of the most important sensory organs in the human body because they render the power to see. The cornea is the clear tissue covering the front of the eye. It is a focusing element of the eye. The vision is dramatically reduced or lost if the cornea becomes cloudy. This loss of vision is referred to as corneal blindness. Donated eyes can be used to restore vision in people who are suffering from corneal blindness.

WHO CAN BE A DONOR
Eyes should be donated within 6-8 hrs of death. Anyone can be donor irrespective of age, sex or blood group. People with cataract or spectacles can donate eyes. And so also those suffering from hypertension and diabetes. Procedure takes about 20 minutes.