Under the Ama Jungle Yojana, women of a Sambalpur village are helping Forest dept in protecting 50 hectare of forest land through ‘Thengapalli’, writes Sudarsan Maharana

BHUBANESWAR:  Clad in sarees and holding lathis in their hands, a group of frail-looking women of Gariakhaman village in Sambalpur district stand guard on the outskirts of Landakote reserve forest, protecting it from the timber mafia and poachers.

Entry of any outsider to the forest is banned unless being allowed by the protectors of Landakote. The result - tree felling and forest fires have become a thing of past. The degraded forest, too, is beginning to regenerate and regain its greenery.

The initiative started early last year when an all-women Vana Surakhya Samiti (VSS) was formed by the Forest department taking 15 women of Gariakhaman village as its members under the Ama Jungle Yojana of State Government. The purpose was forest protection and restoration over an area of 50 hectare (ha) of the forest land. The women launched forest patrolling, called Thengapalli in local parlance.

Holding lathis in their hands, two to three members of the VSS patrol the forest from 7 am to 5 pm every day. And there has been no break in the Thengapalli tradition even for a day in the last 23 months. “Gariakhaman is home to 32 families and men of the village either migrate outside the district to work or are into agriculture. Since the village is located on a hilly terrain, patrolling was not regular. 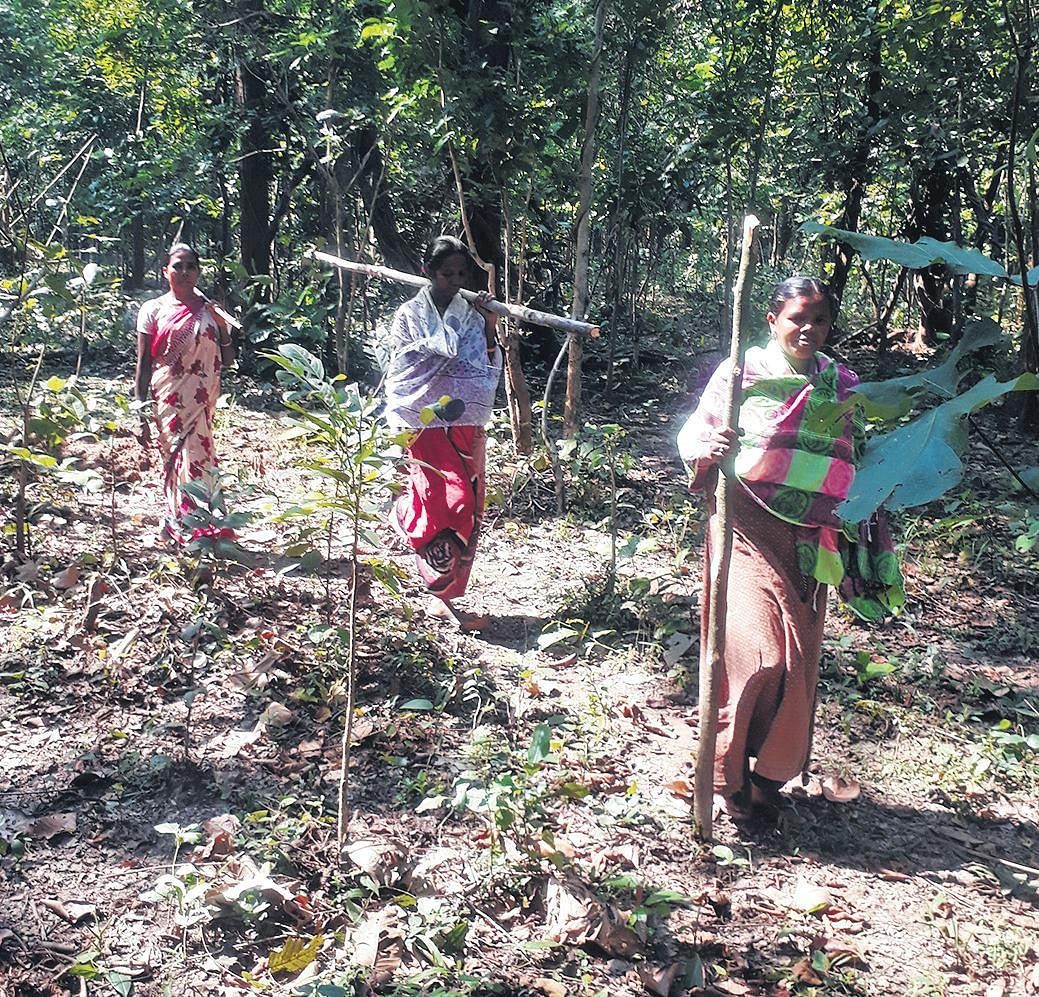 These factors made things easier for the poachers and timber mafia. Protecting the forest that provides us minor produce became paramount and it prompted us to come forward to work with the government”, said Sarojini Samartha, vice-president of Gariakhaman VSS. ‘Thengapalli’ is not only limited to the mornings but the women at times, join forest officials in night patrolling.

Girishchandrapur Range Officer Susanta Bandha said the women also regularly clean dry leaves from the entire forest stretch which prevents forest fire. “Since last year, there has been no fire mishap in the jungle,” he said.

The arrangement is a winwin situation for both Forest department and the women. The initiative has helped them gain financial freedom with the department paying them a wage of Rs 298 per day. Rairakhol DFO Pradipta Kumar Sahu said efforts are on to engage more villagers, particularly women, in forest management and conservation work under Ama Jungle Yojana and similar schemes besides, reduce their dependency on forest for livelihood through skill development and formation of SHGs.

Now we are on Telegram too. Follow us for updates
TAGS
Sambalpur Landakote reserve forest Timber Mafia poachers