Under such circumstances, 31-year-old Pattupogula Pavan Kumar, an engineering graduate, took it upon himself to motivate people and volunteer to donate blood.

KADAPA: Fear of contracting Covid-19 among people has led to shortage of blood in blood banks and hospitals, much to the discomfort of those who are in urgent need of blood for surgery, blood transfusion for thalassemia patients, kidney patients and accident victims.

Under such circumstances, 31-year-old Pattupogula Pavan Kumar, an engineering graduate, took it upon himself to motivate people and volunteer to donate blood. During Covid-19 crisis, this young man, who is the founder of Kadapa-based ‘Blood 2 Live’, a voluntary organisation, succeeded in gathering 700 units of blood, which was provided to government hospitals and blood banks. 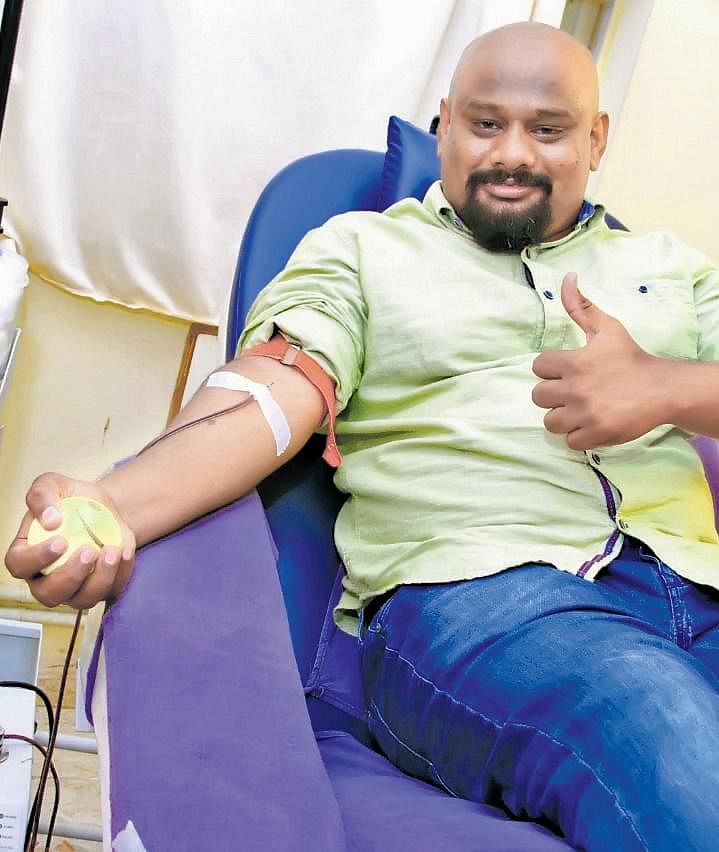 There is a strong reason behind Pawan Kumar, who studied engineering but chose to be a shop owner, to become a blood donation crusader. In 2007, when he was an 18-year-old, Pawan’s mother Parvathi suffered from ill-health and doctors advised spinal cord surgery. However, doctors asked the family members to arrange the blood needed for the operation themselves.

As he was from a poor family and his relatives weren’t aware of what blood donation means, no one came forward. Pawan donated blood to save his mother and the surgery was performed successfully. When he was pursuing engineering, as a student leader, he motivated fellow students to donate blood for those in need. Later, when Pawan’s wife Asha Jyothi alias Grace Mercy suffered from cardiac problems and underwent treatment in a private hospital in Vijayawada, where she was fixed with a pacemaker, Pawan saw the plight of several people including children undergoing treatment in need of blood.

He decided to take up blood donation campaigns as his life’s primary goal. Pawan, who had conducted thousands of awareness programmes in the last 13 years, and organised blood donation camps, was moved by the plight of people in need of blood post-lockdown. After Unlock 1.0, with resumption of road transportation, the number of road accidents has increased, necessitating the need for blood in the hospitals. However, people out of fear of contracting Covid-19, are reluctant to donate blood, which resulted in decrease in blood reserves in blood banks.

“I understood the importance of blood and started a voluntary organisation - Blood 2 Live - and distributed 13 lakh pamphlets creating awareness till date. I myself donated blood 21 times and facilitated blood donation through blood donation camps,” Pawan told The New Indian Express. His efforts fetched him the Red Cross Award and AISF Young Achiever Award

Now we are on Telegram too. Follow us for updates
TAGS
Blood banks Coronavirus COVID-19 Andhra Pradesh coronavirus