Visits remote villages in Kurnool, Prakasam to convince parents to get their wards educated

KURNOOL: Kiran Naik, a government college lecturer, is an inspiration to many. His students are now in a good position, thanks to his motivation. He played a crucial role in shaping the future of many tribal students. Kiran Naik, a native of Sanjeeva Nagar Thanda in Nallamala forest of Atmakur mandal, is now working as a lecturer at Government Model Residential Polytechnic for Tribals in Srisailam. He has received National Award of Excellence Leadership and Management recently from the Angel Global University in Kakinada. 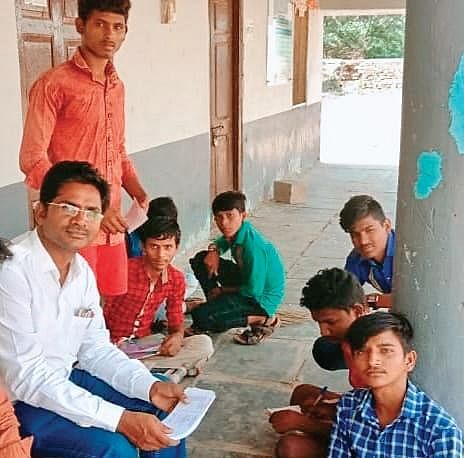 Kiran has been persuading parents of the  tribal children to get their wards educated and improve their living standards. To a query, he said it is of grave concern that many seats in higher education go vacant as the tribals do not come forward to join technical courses. He, however, said it is his life mission to encourage tribal youths to focus on studies to achieve success in their career path.

The Polytechnic education will develop the employability skills of students of Chenchu and Sugali communities, he opined.Post-bifurcation of the State in 2014, there are a few ST student admissions at the GMR Polytechnic in Srisailam. At this juncture, Kiran Naik visited ST Thandas and Chenchu Gudems in Kurnool and other parts of Rayalaseema region, convincing the parents of the students to let their children pursue diploma courses.

“I had visited a number of schools and remote tribal areas in Prakasam and Kurnool districts such as Chintala, Garapenta, Bairluty, Kottalacheruvu, Murikimalla, Yerragondapalem, Dornala and others to motivate the tribal students to study diploma courses,’’ he said. Due to his relentless efforts, 36 tribal youths have joined various courses in the academic year 2016-17. Admissions have gradually increased and now at least 150 students are pursuing different courses in the college, he added.

A student Yakasari Yagappa of Dorakottala village in Allagadda mandal, calls Kiran Naik a ray of hope for tribal youths, particularly in the underdeveloped tribal areas near Srisailam. He said, “After completing diploma  course at GMR Polytechnic, he and his relative, Toguru Kondamma, a native of Garapenta  in Prakasam district, are studying BTech at a private engineering college in Prakasam district.”

Apart from teaching, Kiran Naik actively participated in awareness programmes such as Swachh Bharat and others. He also encourages the tribals to exercise their franchise and promotes use of digital currency in villages. Kiran Naik is the life member in Indian Society for Technical Education, (ISTE), New Delhi. He presented several research papers in national and international conferences. Several of his articles got published in journals. He earned his doctorate for his work on ‘Design of a small-folded printed quadrifilar helix antenna for GPS applications.’

Now we are on Telegram too. Follow us for updates
TAGS
Kiran Naik Angel Global University