In a sense, the book is a dystopian look at what the lives of the current generation of children will look like in the future.

Romola is fascinated by the idea that anything she says or types is travelling around the world, going to places she'll never manage to physically visit, but can’t process the idea that it isn’t just the government snooping anymore, but a peak-traffic cluster of corporations, other governments, religious bodies, cults, gangs, terrorists, hackers, sometimes other algorithms, watching you, measuring you, learning you, marking you down for spam or death.

It’s the end of the 2020s and 25-year-old Joey, a professional image-builder and storyteller, decides to stay on in Delhi instead of escaping abroad like most of the peers of her generation—many of whom have names that "sound like apps or shampoos".

Since childhood, Joey has known that not looking away means seeing terrible things—having grown up seeing images of blood and gore in the news, experiencing internet shutdowns, censors, curfews, data-driven home invasions and the fear of speaking out and taking public stands. Her parents have lost their jobs during the economic downturn over reasons as obscure as social media rants and the takeover of oligarchs.

In a sense, the book is a dystopian look at what the lives of the current generation of children will look like in the future. The book’s title is borrowed from 18th century Urdu poet Mir Taqi Mir’s 1782 poem about Delhi "where dwelt the chosen spirits of the age"—the city that fate looted and laid desolate. "In New New Delhi, the only crime is nonconformity, and conformity is a fast-shifting, ever-angry chimera that must be constantly fed."

Reading Basu’s book, especially now in a post-coronavirus world, makes one almost nod in agreement with much of the imagery, though scary, described in it. His first novel, The Simoqin Prophecies, was the first book in the bestselling Gameworld Trilogy and marked the beginning of Indian English fantasy writing.

His global breakthrough happened with the superhero novels Turbulence and Resistance, published to rave reviews. It won Wired’s Goldenbot Award as one of the books of 2012 and was superheronovels.com’s Book of the Year for 2013. Also working as a film director and screenwriter, Basu’s debut film, House Arrest, was released as part of Netflix’s International Originals last year, and was one of the OTT platform’s top five most viewed Indian films the same year. 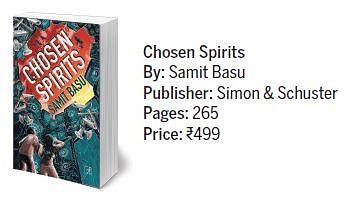 Nobody trusts Chirag Paswan, NDA has nothing to do with LJP: Anurag Thakur