Soar is an interesting insight into a war.

In their migration upward, the caterpillars did not disdain an index finger or the back of a hand. They also turned to the open Gita and the open Qurán the soldiers held in their palms, to serve as oases on the trek. They did not chew holes in the pages, but their feet drew up microscopic amounts of ink as they crossed, leaving the letters fainter. High-traffic passages lost most of their diacritical marks. The books bridged the pilgrims gingerly from basket edge to rigging rope. The caterpillars were drawn, it seemed, to the balloon itself. Once they made it there, each chose a spot, stopped moving, looked side to side, and seemed to go to sleep. The balloon’s vast underbelly was speckled orange, green, and white.” 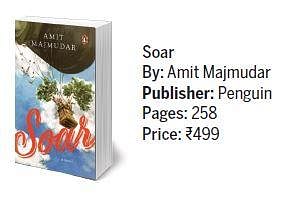 Bholanath and Khudabaksh, respectively Hindu and Muslim soldiers, belonging to the Junagadh district of Gujarat, sign up with the Indian army in 1911. When a mission in a surveillance balloon goes awry during World War I, they both find themselves soaring in the sky, courtesy their common ruler, the British. Despite the seeming differences in their identities, the two soldiers are the best of friends. They exchange thoughts, ideas and other ramblings with each other while revelling in their similarities in this peculiar tragicomic adventure that time throws them together in. A squirrel, who they comically name Kabira, accompanies them and often becomes a metaphor for many of their rhetorical conversations and random musings about life.

“Can a soldier’s eyes become wounds just from seeing too much?”

“Wounds inside the eyes never close, not even when the lids come down.”

They were often subject to racial discrimination, segregation, physical punishments, lesser pay and other human atrocities. About 34,000 of them were killed during the war far away from home in Europe, Africa and the Middle East. British historian George Morton-Jack’s book The Indian Empire At War: From Jihad to Victory, The Untold Story of the Indian Army in the First World War (Little, Brown, 2018) talked about the predicament in depth most recently.

Majmudar has also written a lot on mythology in the past. Some of his recent books include Sitayana (Penguin, 2019) and Godsong: A Verse Translation of the Bhagavad-Gita, with Commentary (Knopf/Penguin, 2018). His fourth poetry collection that is forthcoming in the US—What He Did in Solitary (Knopf, 2020)—consists of poems about identity, love, loss, communal violence, politics and the solitary nature of being.

Stay up to date on all the latest Books news with The New Indian Express App. Download now
(Get the news that matters from New Indian Express on WhatsApp. Click this link and hit 'Click to Subscribe'. Follow the instructions after that.)
TAGS
Soar book review Soar Amit Majmudar