Apart from the Ambala and Delhi outposts, there is another flight of fancy currently waiting to take on passengers, if not to the skies.

"A lot of people in our country never get the opportunity to fly. So my wife, Shruti, who used to work with Jet Airways as an air hostess, and I decided to bring a small slice of the skies for everyday people to sample down here, but with better food," says Kshitiz Kakkar, owner of a grounded fleet of aircraft that have found a new lease of life as restaurants: Runway1, which are presently (not) flying out of Delhi’s Rohini and Ambala.

Apart from the Ambala and Delhi (Rohini) outposts, there is another flight of fancy currently waiting to take on passengers, if not to the skies. While it has been reported elsewhere that a new high-flying new eatery will take wings in Noida, Kshitiz is quick to disassociate himself from it. 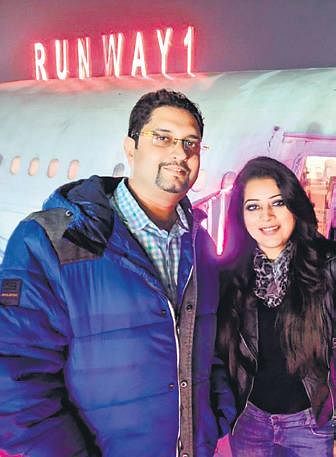 “We’ll see what happens there. We may be brought on board later, but as of now, we are looking to see if we can bring Runway1 to Gurugram as well.” Interestingly, while Kshitiz and his family opened the country’s first ‘aeroplane restaurant’ in Ambala five years ago, under the aegis of Kuldeep Kakkar (Kshitiz’s father), with a subsequent plane parking itself in Rohini.

While this ‘gimmick’ took wings long before the pandemic, since the global grounding of flights, people have been so desperate to take to the skies again that companies like Singapore Airlines are offering in-flight meal experiences for a fixed dollar amount. So, like in many other areas, from (intermittent) fasting to yoga, Indians are far ahead of the timeline. The process of converting an aeroplane into a sit-down restaurant is, obviously, exhaustive.

“Once we finally get the aircraft, the process of disassembling it, removing all internal parts, refitting it with seating and so on, takes six months,” notes Kshitiz. Add on the time it takes to actually procure the aircraft and it takes around a year or more to set up an “aeroplane restaurant.” “We know airline food is terrible, which is why we offer superior multi-cuisine food at lower altitudes, and so far, people have taken to it “We take on grounded aircraft, which are no longer viable to fly, but are also large enough to serve as functional restaurants,” says Kshitiz, noting that the kitchen is on the ground, with the fuselage (main body) and wings taking up the actual dining space.

“We are the first aeroplane restaurant in the world to offer dining on the wings, in an al fresco setting,” says Kshitiz proudly, pointing out that other such concept restaurants (from London to various Chinese cities) limit their dining to the fuselage.

“We get a lot of bookings from couples, men wanting to propose, and whole families, as well as permutations of the same,” shares Kshitiz, adding that every day is a new day, but the Rohini outpost is very popular with groups and for occasions, as is the first in Ambala. “We have booking options on everywhere from Bookmyshow to other aggregators, because people like booking the entire aircraft for a party.”

Now we are on Telegram too. Follow us for updates
TAGS
Runway1