In Uttar Pradesh, Samajwadi Party leader Akhilesh Yadav, who is contesting from Azamgarh, is up against Union Minister Maneka Gandhi from Pilibhit.

West Bengal where 55 per cent voting was recorded within six hours of polling, saw sporadic violence in some areas.

Around 10.7 crore eligible voters turned up to cast their votes in the sixth phase of the Lok Sabha elections on Sunday to decide the fate of 979 candidates in the fray.

All eyes are on Bhopal where Congress veteran Digvijaya Singh is pitted against BJP hardliner Pragya Singh Thakur. In Delhi, its a triangular fight between the Aam Admi Party, the BJP and the Congress --- which is looking for redemption in all the seven seats. Former Delhi Chief Minister Sheila Dikshit is pitted against state BJP chief Manoj Tiwari from Northeast Delhi.

Re-polling in the by-election to the Kamaraj Nagar Assembly segment in Pondicherry saw a voter turnout of 55.35 percent, poll officials said Sunday. Of the total 952 voters, 527 electors including 265 women exercised their franchise, reported PTI.

Congress leader Digvijay Singh on Sunday expressed regret over not being able to cast his ballot in Rajgarh district of Madhya Pradesh, which is over 130 km away from state capital Bhopal where he is locked in a key contest with BJP candidate Pragya Singh Thakur. [READ FULL REPORT]

Priyanka Gandhi Vadra and Robert Vadra's 19-year-old son Rehan, a first-time voter, was conspicuous by his absence on Sunday as his parents came out to vote in the sixth phase of polling in Delhi. "Rehan cannot vote today as he has gone to London," Priyanka told reporters.

#WATCH: Narkatiaganj: An attempt was made to attack Sanjay Jaiswal (in red kurta), BJP candidate from West Champaran Parliamentary Constituency, with sticks outside polling booth no. 162, 163. He is unhurt. #Bihar #LokSabhaElections2019 pic.twitter.com/sxL3YWyAT7

Political parties have used 1984 riots to get our votes. We have decided to not cast votes: youths at Tilak Nagar #WestDelhi @NewIndianXpress @TheMornStandard pic.twitter.com/ehsHsVX0re

I would have been lynched: Sanjay Jaiswal

On speaking to Express, Jaiswal said that when he went to booths after being informed that voters of particular castes were prevented from voting. "Had my security guards not opened fired, I would have been lynched till now," he alleged.

An unruly mob armed with of lathis reportedly attacked BJP candidate from Bettiah Dr Sanjay Jaiswal at Narkatia assembly segment. The police have taken Jaiswal, sitting MP of Bettiah, under protection and rushed additional police forces at the spot, The incident took place near booths 162 and 163 where Jaiswal had gone on rounds during polling. Bettiah is district hw.of West champaran and gunshots were heard also from booths, reports Bihar correspondent Rajesh Kumar Thakur.

The district police of East Champaran at Motihari in Bihar apprehended a youth identified as Manoj Gupta for allegedly influencing the voters with cash in favour of a particular candidate near to the polling booth. He was taken to the local police station by a team of police officials.

Sources said Gupta had some amount of cash in his possession that couldn't be disclosed till the releasing of this report.

In another incident, the Motihari police seized an SUV belonging to Dhakha RJD MLA Faisal Rahman when he was escaping after having an alleged exchange of words with some electorates at Jamuna nagar booths 261 and 262.

Have demanded that outsiders be not allowed in Lok Sabha constituencies, 48 hours before the elections, and that history-sheeters be arrested. Our candidate Bharati Ghosh's car was stopped, have demanded action against the officers involved: Union minister Mukhtar Abbas Naqvi

Kejriwal, Sonia, Rahul, and other leaders queue-up as voters seal their fate in sixth phase of polling.

AAP South Delhi candidate Raghav Chadha: BJP workers are moving around in a polling booth in Sangam Vihar in BJP scarves, a person voted 4 times. We identified 8-10 such ppl and caught one red handed. Ramesh Bidhuri(BJP candidate) is losing badly so is indulging in such tactics pic.twitter.com/OR8LKqbyeQ

Sources said that 15 cartridges of 32 bore, two wooden sticks and two number plates bearing different registration numbers have been recovered from these vehicles. Two persons identified as Sunil, a resident of village Makdouli and Ramesh, from Bohar village have been arrested along with these vehicles.

Massive rigging and bogus voting incidents reported at Govt Boys Sr Sec School in Tughlakabad. Our volunteers have again unearthed the fraud. Election officers and Police are in connivance with BJP. I am reaching the spot.

34.92 per cent polling recorded in Uttar Pradesh till 1pm

The Sultanpur constituency recorded the highest number of turnout at 38.87 per cent whereas Phulpur recorded the lowest at 29.2 per cent.

BJP MLA Arvind Bhadauria and Cong MLA Hemant Katare are also under close surveillance at their house to prevent any untoward incident.

We are fighting to save democracy: Priyanka Gandhi Vadra 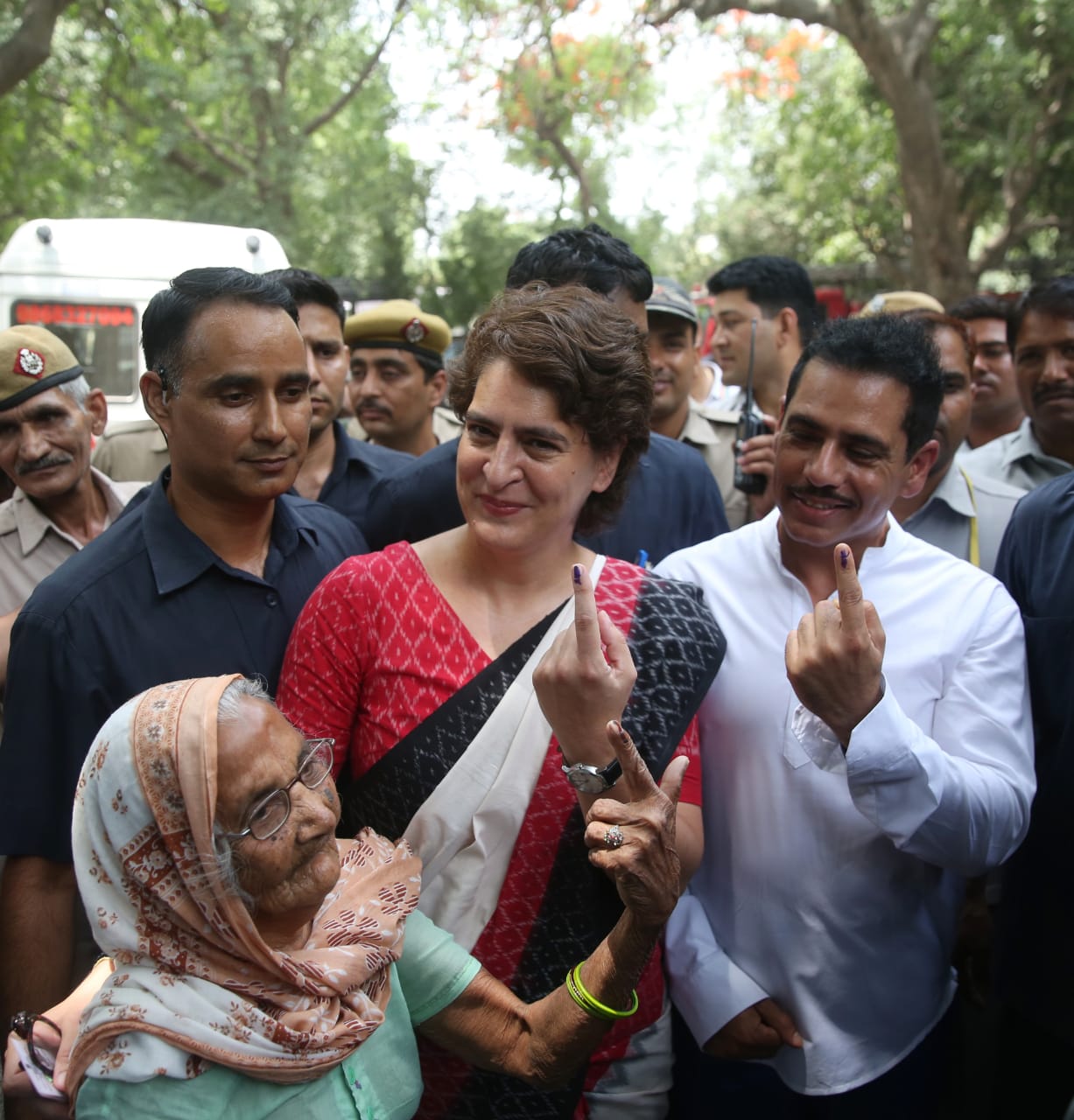 Priyanka Gandhi Vadra after casting her vote in Delhi: It's a really important election because we are fighting to save democracy, for our country, and keeping that in mind I cast my vote.

Bengal BJP Chief Dilip Ghosh- At a booth in Rampura, my people were being threatened since yesterday so I went to meet. TMC goons attacked us, we were stopped from going inside the booth. These people are stopping people from voting.

Samajwadi Party chief Akhilesh Yadav alleged that EVM were not functioning properly in Azamgarh. The party had complained to the Election Commission about district authorities helping the BJP.

Complaints about malfunctioning EVMs poured in from several places of the national capital on Sunday where voting is underway.

WATCH| Delhiites come out in numbers to cast their votes

West Bengal: Vehicles in BJP Candidate from Ghatal, Bharti Ghosh's convoy vandalized. BJP has alleged that TMC workers are behind the attack pic.twitter.com/xdsJNkKhV8

21 per cent voting recorded till 11 am in UP

Uttar Pradesh recorded over 21 per cent of polling till 11 am.

Clashes break out between BJP and TMC workers in Bankura

Scuffle between BJP workers and TMC workers at polling booth number 254 in Bankura after BJP alleged rigging by TMC workers.

Arvind Kejriwal stands in queue to cast his vote 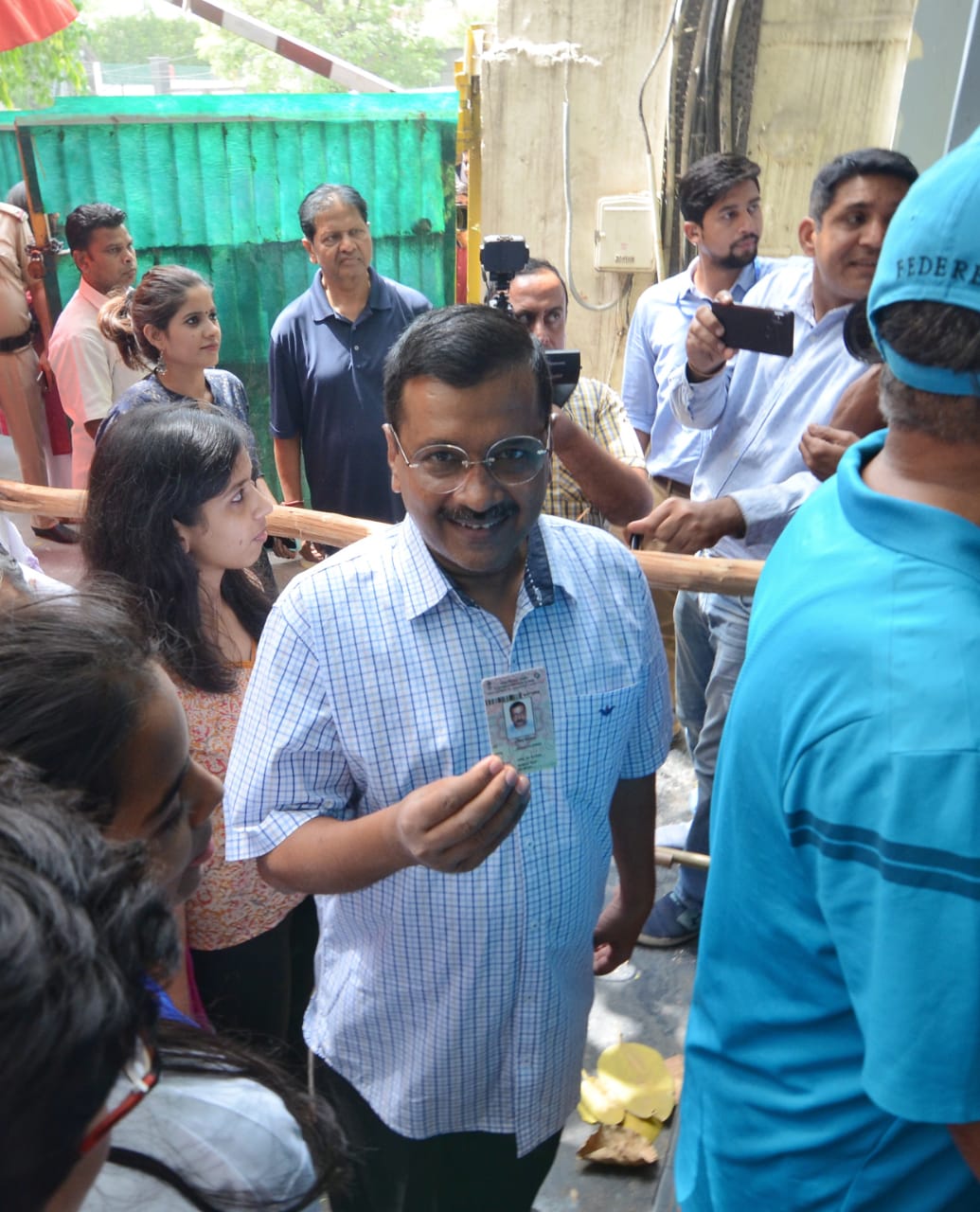 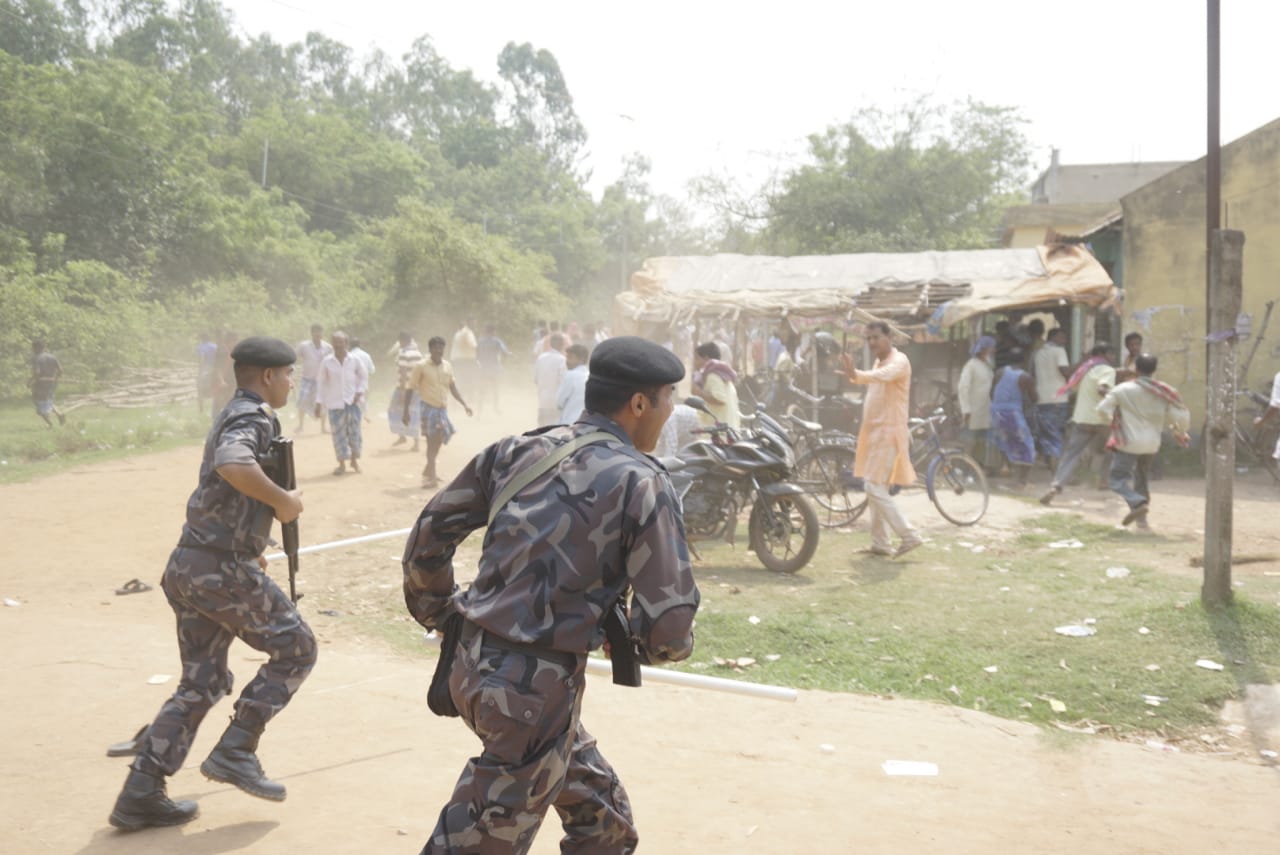 Narendra Modi used hatred in the campaign and we used love: Rahul

"The election was fought on key issues including demonetization, farmer problems, Gabbar Singh Tax and corruption in Rafale. Narendra Modi used hatred in the campaign and we used love and I am confident love will win," said Rahul Gandhi. 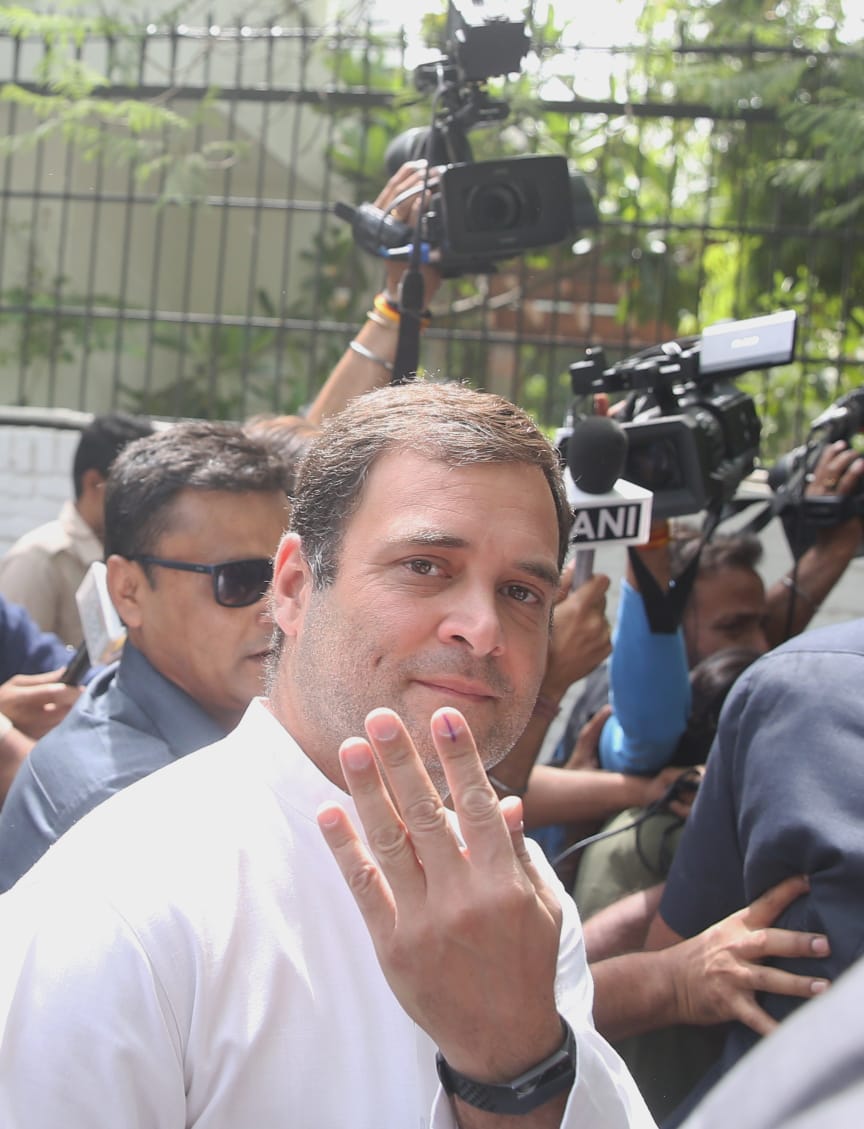 A voter, aged about 65, died after casting his vote at Pipra kothi booth number 262 in Motihari. 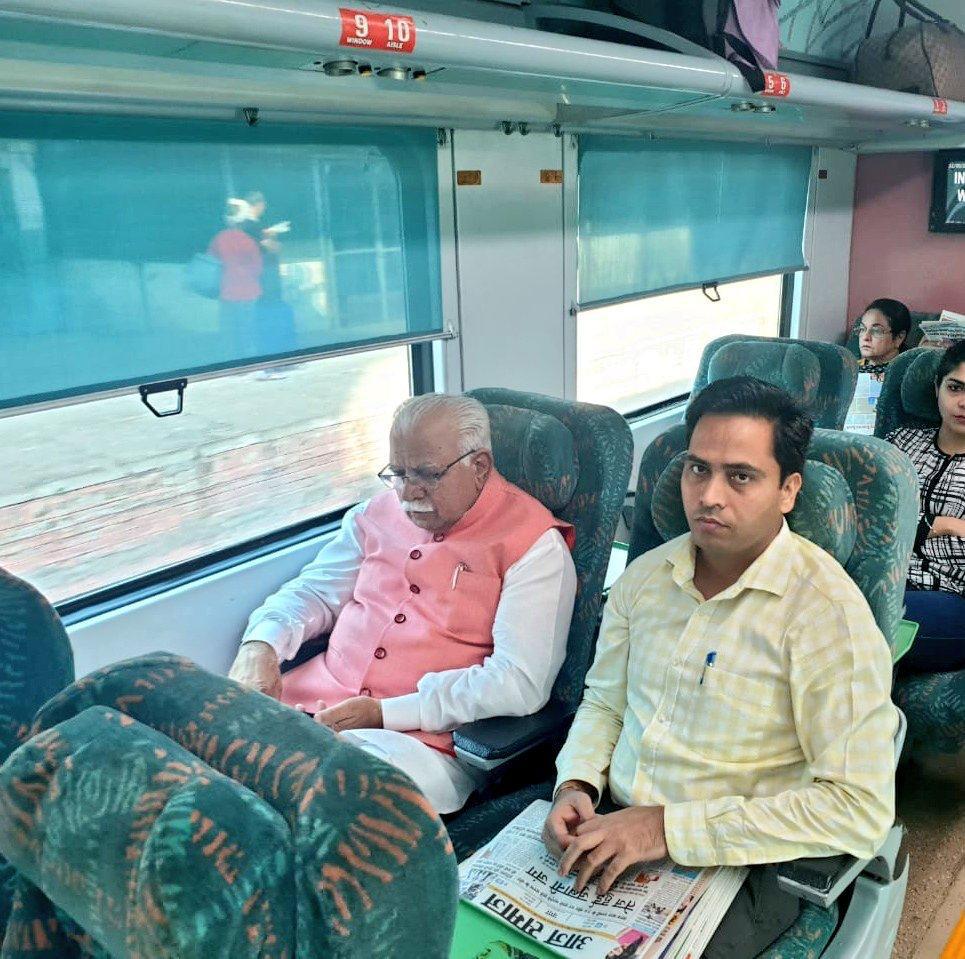 Maximum 15 per cent in Rajgarh and minimum 4per cent in Gwalior polling was reported till 9 am. In, Bhopal around 9.5 per cent and 6 per cent polling from Guna was recorded.

"The incident took place in course of careless handling of arms by a constable on duty," official sorurces said, adding that the injured was immediatly rushed to a nearby private clinic.

Voter turnout till 9 am

10 per cent polling in Delhi so far

10 per cent polling recorded in national capital till 9 am. 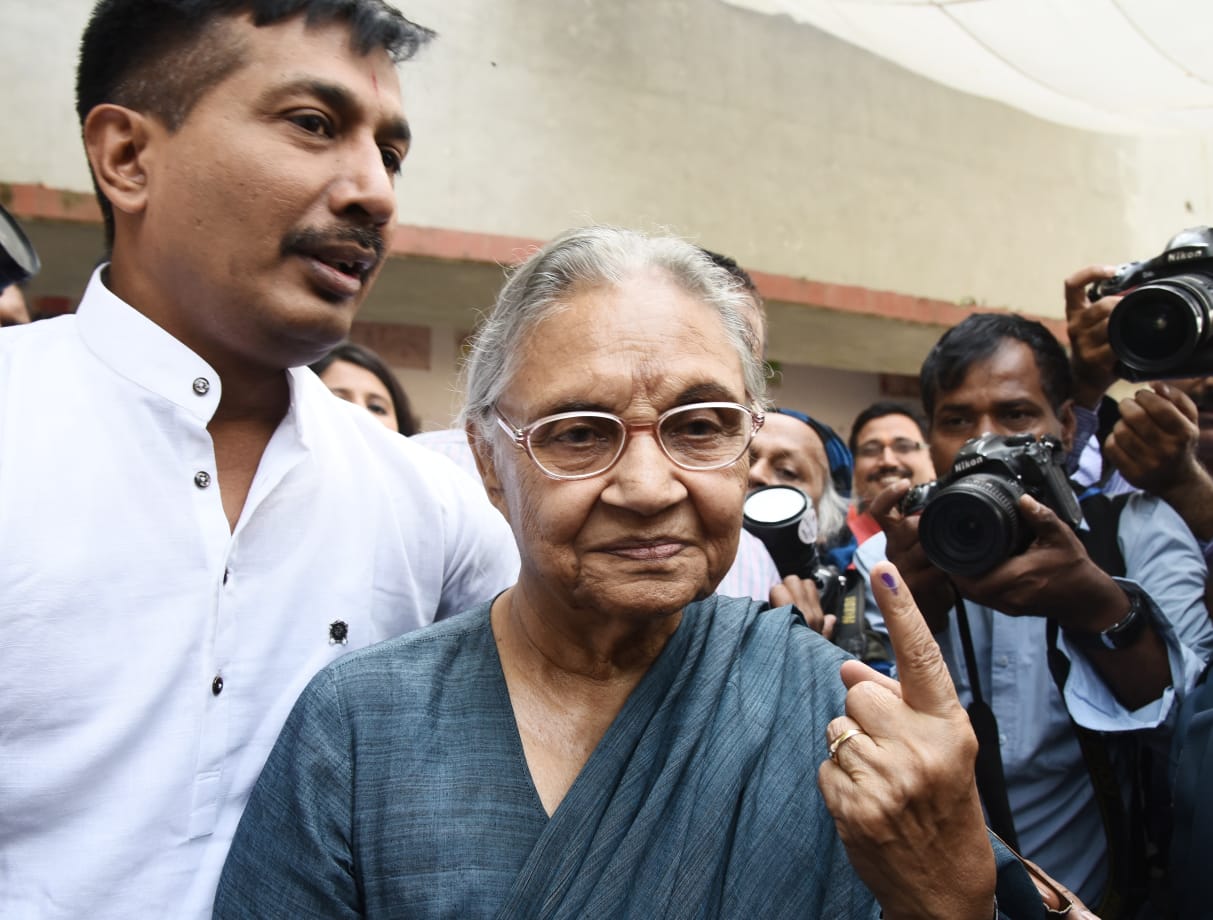 Sector assistant engineer, AK Shrivastav was suspended for allegedly carrying the reserve EVM to his residence here. "The EVM has been seized and the officer has been suspended, further action will be taken on instructions of the higher-ups," SDM, Shivani Rakwar Garg told media on Saturday.

Brisk voting seen in the early hours in Sultanpur where Union Social Welfare minister Maneka Gandhi is trying her luck against Chandrabhadra Singh of gathbandhan and Dr Sanjay Singh of Congress.

BJP Candidate from East Delhi Gautam Gambhir casts his vote at a polling booth in Old Rajinder Nagar. He is up against AAP's Atishi and Congress's Arvinder Singh Lovely pic.twitter.com/uzQZdH7qzN

Yet another phase of the 2019 Lok Sabha elections is here!

Urging all those whose constituencies are polling in today’s sixth phase to go out and vote. I hope youngsters are voting in record numbers. After all, their participation makes the polls even more special.

Voting yet to begin in some parts of Bengal

In West Bengal's Bankura, owing to EVM malfunction, voting is yet to begin in multiple polling booths.

Voters in Delhi waiting in queue to cast their vote 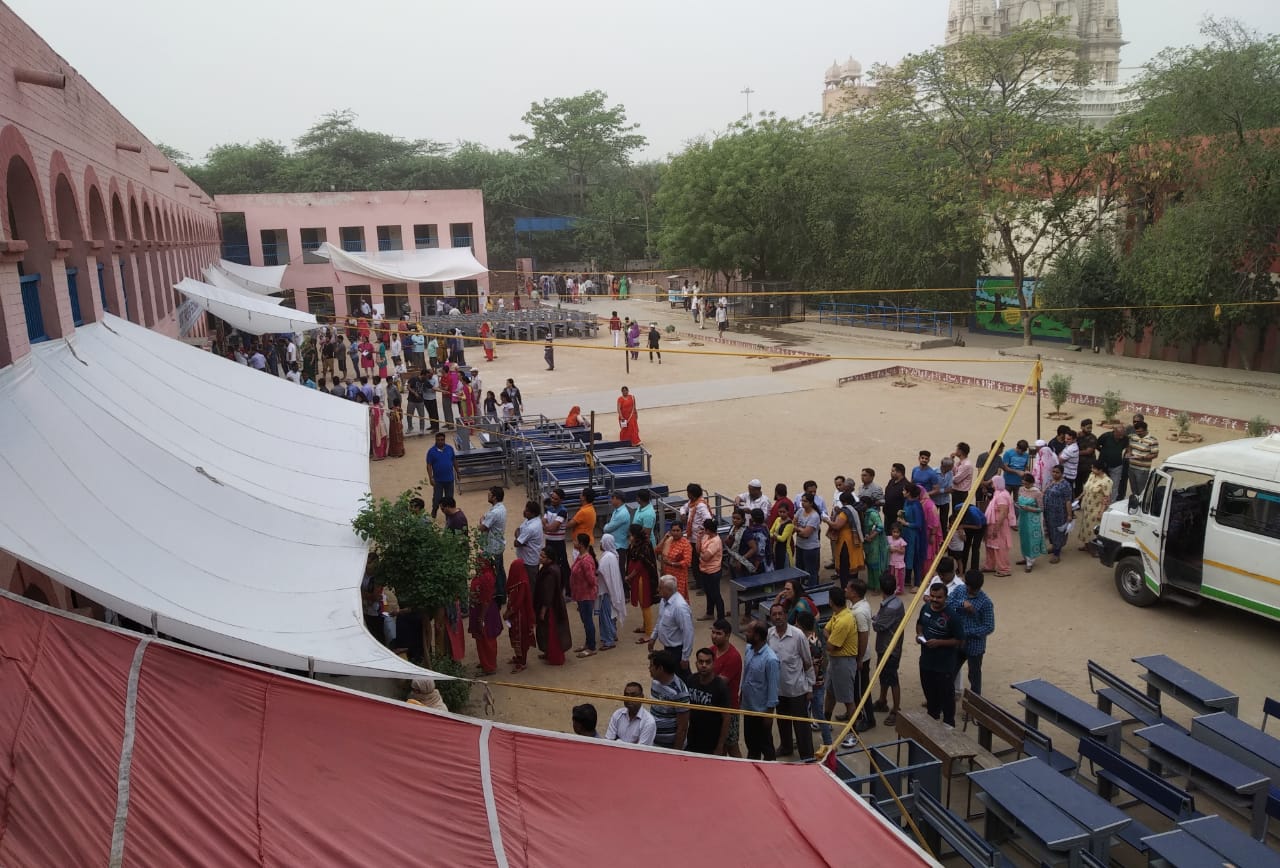 In an interview with Express, Pragya Thakur said that Hindutva and development are synonymous. Arrested in the 2008 Malegaon blast case, she was given a clean chit by the National Investigation Agency (NIA), but the trial court refused to discharge her from the case. 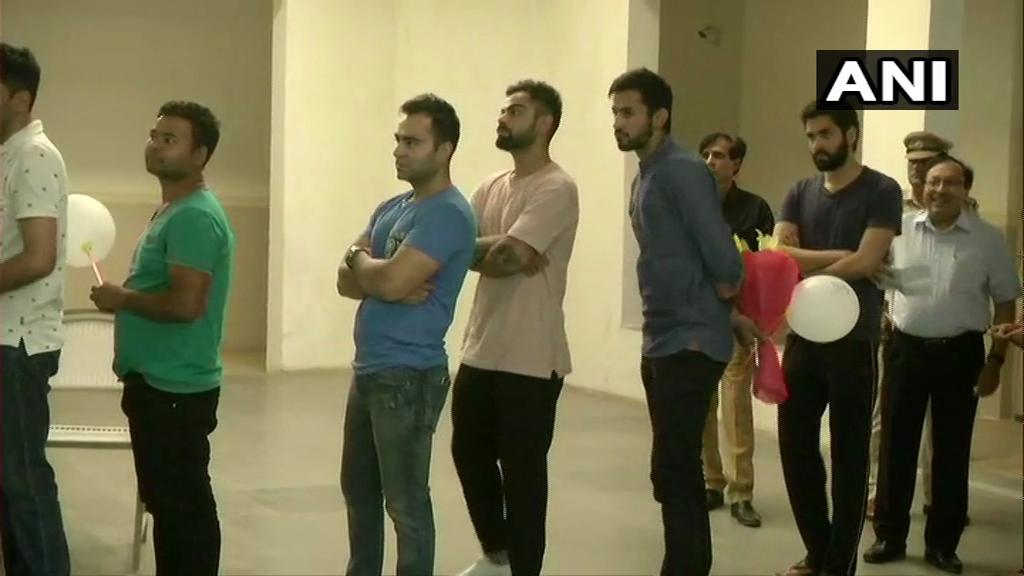 All seven seats in Delhi are going to polls today