As many as 15 Cabinet ministers, including some new faces, were sworn-in at the swearing in ceremony held in the Darbar Hall of the Rashtrapati Bhawan.

As many as 15 Cabinet ministers, including some new faces, were sworn-in at the swearing in ceremony held in the Darbar Hall of the Rashtrapati Bhawan.

While 13 members took oath in Hindi, two took in English.

Rane, 69, a Rajya Sabha MP and a former Maharashtra chief minister, was the first to take oath.

RCP Singh: saga of the meteoric rise of a Kurmi bureaucrat-turned-politician

Meenakshi Lekhi: From BJP face in media to Union minister

Paras, who previously headed Lok Janshakti Party's Bihar unit and is currently the national president of its breakaway faction, began his innings in 1978 as a Janata Party MLA from Alauli in his native Khagaria district, a seat formerly represented by the late Ram Vilas Paswan. (READ FULL STORY HERE)

Anupriya Patel returns to council of ministers after two years

An MP from Uttar Pradesh's Mirzapur, 40-year-old Patel belongs to the Kurmi community and had been a minister in the first government led by Prime Minister Narendra Modi. (READ FULL STORY HERE)

"This is a big day for JDU. For 1st time, our national president will be in Union Cabinet," says Dr Sagarika Chaudhary, JDU state secy pic.twitter.com/Aoaj4mJuDZ

Scindia (50) resigned from the Congress and joined the BJP in March 2020 and his move triggered a chain of events which finally culminated in the collapse of the Kamal Nath government just 15 months after its formation, paving the way for the saffron party to assume power which it lost towards the end of 2018. (READ FULL STORY HERE)

Not known to mince words, the Maratha leader having pockets of influence in the coastal Konkan region, was picked by Shiv Sena supremo Bal Thackeray as chief minister when he decided to remove the genial Manohar Joshi ahead of the 1999 assembly elections. (READ FULL STORY HERE)

Supporters of BJP MP Jyotiraditya Scindia celebrate his inclusion in the new Union Cabinet, outside the BJP office in Bhopal.

"There is enthusiasm among MP youth. We are celebrating, distributing sweets as Modiji has given an opportunity to youth leadership," said a supporter pic.twitter.com/jR2H1q0Xh4

Narayan Rane first to take oath, another 42 in line

Narayan Rane begins the oath-taking proceedings. Sarbananda Sonowal, the man who made way for Himanta Biswa Sarma as Assam CM, is next. The list of how the swearing-in will continue is in the list we had shared earlier and are sharing once again:

????LIVE Now#PresidentKovind administers oath of office and secrecy to members of Council of Ministers at @rashtrapatibhvn

The President of India accepts the resignation of 12 members of the Council of Ministers including IT Minister Ravi Shankar Prasad, Environment Minister Prakash Javadekar, Health Minister Harsh Vardhan, Education Minister Ramesh Pokhriyal ‘Nishank and others, says the Rashtrapathi Bhavan.

Reddy, fondly known as Kishananna, was elected as the Member of Parliament to 17th Lok Sabha in 2019, from Secunderabad Constituency. Reddy is also a 3-time MLA and BJP Floor Leader in Telangana and Andhra Pradesh Assemblies. (READ FULL STORY HERE)

Cabinet reshuffle meant for distribution of the spoils of power: Congress

With L Murugan set to assume office as Union Minister, the Tamil Nadu State unit will have a new president soon. The development comes on a day when the BJP demanded an explanation from EPS and OPS after an ex-minister said the AIADMK lost power in the state due to his party's pact with the saffron party.

Scindia leaves his residence ahead of Cabinet reshuffle

Duo with a dream run in the BJP

Two ministers taking the oath of office today are new members of the BJP who have been making waves every since they switched sides.

Luck of Lok Sabha MP from Jharkhand Annapurna Devi must be envious. Joined BJP from RJD, became vice president of the party, and now in #Modi council of ministers.

Another turncoat SPS Baghel also has a dream run, joining the @narendramodi council of ministers. He had joined BJP ahead of 2017 UP polls from BSP. @NewIndianXpress @TheMornStandard

The Union Cabinet expansion will take place this evening pic.twitter.com/N7cidr3SY9

Several Dalits, backward caste members are being made ministers. They are doing it from the point of polls. This is being done to distract people. They are not doing this for welfare of communities but because of their compulsion: Mallikarjun Kharge

Who are the new faces in Modi's new cabinet? 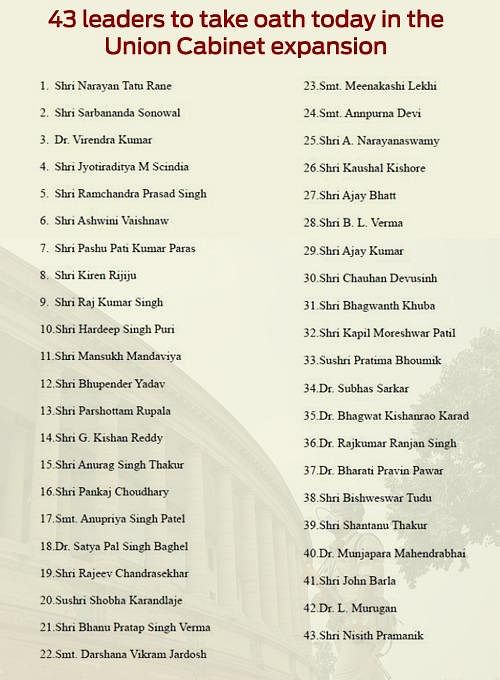 Labour minister Santosh Gangwar has resigned from the Union Cabinet ahead of the scheduled Cabinet reshuffle this evening along with Union Education Minister Ramesh Pokhriyal 'Nishank', the latter citing health reasons

Union Chemicals and Fertilizers Minister DV Sadananda Gowda on Wednesday resigned from the Union Council of Ministers. Gowda confirmed his decision to step down. Besides being the chemicals and fertilizers minister in the Narendra Modi government, Gowda has also held portfolios like Railways, Law, Statistics and Programme Implementation.

Resignations ahead of cabinet reset