In 2015, Chicago-based contemporary dancer Shirley Mordine became curious about the role of ageing dancers in a society that often focused on the youth. This curiosity then became the starting point of an exploration in differences and tensions between generations, cultures, environmental and climatic changes for the artist, who is also the founder of Mordine & Co Dance Theatre.“In a sense, the Collisions project started then,” she says, sitting at Spaces in Chennai, a practice and performance arena housed within the beautiful home of late contemporary dancer and choreographer Chandralekha.Shirley landed in Chennai from the United States two weeks ago, with the intent to explore and deliberate on the original idea of the Collisions project with two other artists—Bharatanatyam dancer Hema Rajagopalan, who is founder of Natya Dance Theatre in Chicago, and Mumbai-based Indian contemporary dancer Astad Deboo. 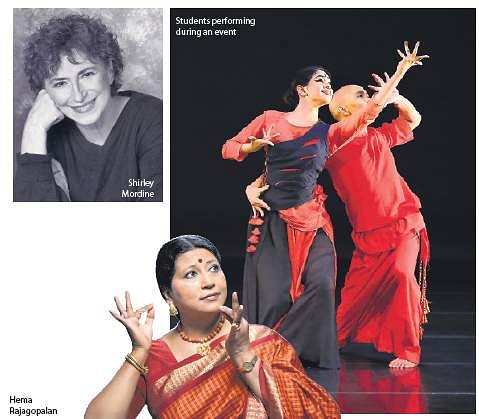 “This is a collision of cultures through three different sources of art practice,” Shirley adds. “The project also explores generations as Hema, Astad and I have long legacies and bodies of work in our respective forms. And each one of us will bring a new professional dancer to join us in this project.”
In the last week of March, at Spaces in Chennai, a group of dancers—both classical and contemporary—as well as practitioners of theatre and movement, engaged in an evening of exploration, movement and conversations with the three famous dancers. Three days later, the three artists and their very talented dancers, again showcased excerpts of the idea of how Collisions as a work could bloom into, at Atelier in Delhi.

Having spent four decades creating and performing Bharatanatyam, Rajagopalan and Mordine have collaborated several times in the past. Yet, this work, Hema believes, is one-of-a-kind because it’s the first time that they will work with Deboo.From a collaboration point of view, Rajagopalan and Mordine believe that Deboo will provide another layer to the collaboration that will allow them to go deeper. What is interesting is also the points of intersection and convergence. Deboo and Mordine work in contemporary forms but with a different lineage; Rajagopalan and Deboo are both Indians with a similar cultural context.
This an opportunity for Shirley to soak in Indian culture. “We hope that the immersion will churn out some thoughts and we will be able to create some new movements,” says Hema. They all will meet again in August in Chicago to experience the process of three art forms coming together.
Hema says, “I feel that whenever I work with another genre or style of dance or artist, my own art and my perspective of my own work expands and evolves.”

From the creation point of view, for the artists, it is an opportunity to be inspired by each other, and the possibility of a meaningful engagement that could change and enrich their direction.
Shirley says, “I’d also like to reiterate the importance of the historical perspective that Bharatanatyam brings to this project. American contemporary choreography has a much shorter history and a different historical perspective as compared to Bharatanatyam.” For audiences, Collisions is an idea and work worth reflecting upon. “It’s very relevant in today’s context as diverse people, culturally, generationally and geographically intersect so often,” says Hema.