Loved Deepika Padukone’s stunning choker in Padmaavat? That, and all other pieces from the film, can be yours, thanks to Tanishq’s Padmavati Collection

By Shilpi A Singh

When filmmaker Sanjay Leela Bhansali recreated the opulence and grandeur of regal Rajputana for his period film, he turned to jewellery brand Tanishq to create the jewellery worn by the characters of Rani Padmavati, Raja Ratan Singh, Alauddin Khilji as well as all the other major characters in the film. The result is a visually stunning reinterpretation of the time-honoured techniques of traditional Rajasthani craftsmanship like meenakari, jadau, kundan as well as miniature paintings. 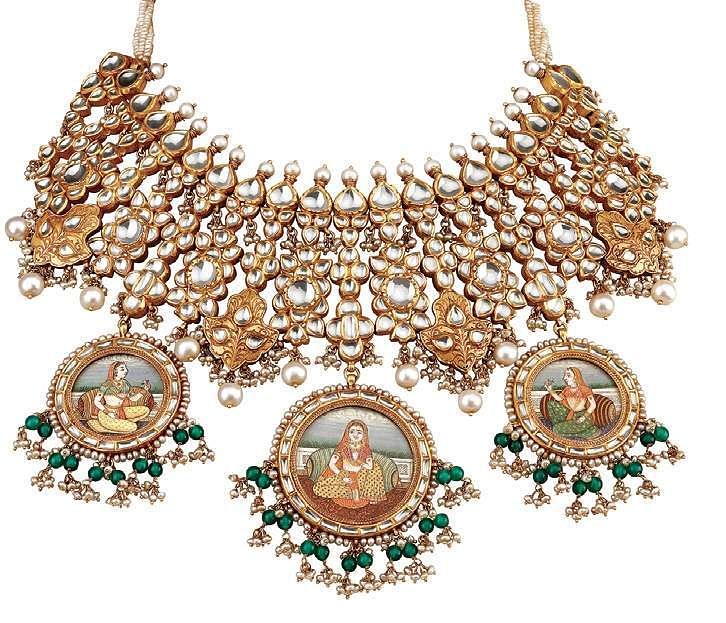 The design team at Tanishq led by Revathi Kant, associate vice-president, design, innovation and  development, Titan Company Limited, toiled for over a year to bring the director’s vision to life. The collection of 1,500 regal pieces was meticulously handcrafted by 200 craftsmen using 500 kg of gold over a period of 600 days to stay true to that era. “Padmaavat was a high-energy, high-intensity project. The entire team of designers, vendors and karigars put in a lot of effort for over a year to realise Bhansali’s vision. Our team has put their heart and soul into creating these magnificent pieces. And, as they say, you have to go through something intense to create something so dreamlike, and that is pretty much the story of the Padmavati Collection,” says Kant.

Now, this Padmavati Collection consisting of all those stunning necklaces, chokers, ranihaars, jhumkis, hathphools, bangles, borlas, naths and maangtikkas is available at Tanishq stores across the country. Pearls and gemstones such as rubies, emeralds, sapphires, opal and jade have been used extensively in the collection.

The miniature paintings and stone inlay work in a combination of kundan setting have given the jewellery collection a unique, old-world charm. Regarding gold technique, a lot of age-old traditional sheet work with reva, wire, partaj, chitai with meenakari has been used. The collection also sees a revival of old styles such as moti ki gheri.

Months of extensive and detailed research went into designing the final pieces of jewellery. Queeta Rawat, design manager, Tanishq, recalls how the team went through hundreds of pages of books, closely studied various artwork from the era and travelled pan-India for research to create authentic jewellery pieces for Bhansali’s grand celluloid venture. Several meetings with Bhansali’s team followed where intricate details of the jewellery, specific to each character, were defined.

Rawat says, “We went to Rajasthan to explore and understand the kind of designs that were prevalent at the time. The pieces of jewellery for the different scenes in the film have been designed to suit the characters and the emotions that the scene involved. Each piece worn by the lead actors has been handcrafted painstakingly while trying to stay true to the jewellery worn in that era.”

While gold serves as the base metal for most of the pieces, silver too has been used. “The Padmavati Collection draws inspiration from each of these characters; each piece has been designed to match the personality of the character who wears it. Alauddin Khilji’s jewellery, for instance, is heavy on gold, as is thought to be true of Afghan kings.

He was also a fierce warrior, a trait that is reflected in the claw-like designs of some of his embellishments, and the use of uncut, unshaped precious stones. Ratan Singh, in contrast, exudes goodness and elegance, so his jewellery uses a lot of pearls and kundans. Rani Padmavati is shown wearing jewellery commonly worn during those times,” says Rawat.

Indeed, the collection is a breathtaking assortment that seamlessly blends Mughal and Rajasthani styles. “While the Jauhar necklace boasts of a pearl piroi threaded on a gold wire, the opals that imitated water were cut in different shapes to enhance the piece’s exclusivity. The necklace also shows nearly 6,000 pearl ghungris that give a delicate yet covered look. The piece underwent several rounds of fitting to make it perfect for Deepika Padukone,” adds Kant.

Like the film, the collection has been a hit ever since it was launched during this wedding season. “As most of the pieces are crafted in gold with a lot of kundan work, many brides are also looking at this collection for their wedding jewellery purchase,” Kant adds.

Now we are on Telegram too. Follow us for updates
TAGS
Padmaavat