The Bhagavatam is a series of satsangas or divine conversations between many people.

The Bhagavatam is a series of satsangas or divine conversations between many people. Shaunaka, who started it all with Suta, hears fully the birth and glory of the divine sage Narada, and his meeting with and inspiration given to Sri Veda Vyasa asking him to write the Lord’s stories.

Veda Vyasa goes into his hermitage on the banks of the Saraswati river flowing through Badarikashrama (today’s Badrinath). There is a place called Vyas Gufa and Ganapathi Gufa above the Saraswati Janmasthan, a waterfall near Bim Pul in the Mana village. 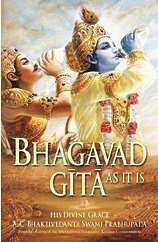 The sage saw the existence of one supreme self in all and its potent power called maya, which deludes the mind, but is dependent on the supreme being for its very existence. The individual human being is completely deluded as he has for his very nature the very same three qualities that constitute maya—satwam (brightness), rajas (dynamic activity) and tamas (inertia). He realised that the only way to quell useless thinking was to turn the mind towards that supreme being.

He sat down hence to bring out a book that would cultivate such devotion in the hearts of human beings. By mere listening to the story of the Srimad Bhagavatam, devotion is created in that supreme self whose nature is dark and hidden to the view of common man. This knowledge also removes sorrow, delusion and fear in humans.

Having completed the Srimad Bhagavatam, he took it forward to the generations to come by teaching the text to his son Suka Brahmamaharshi, who even as a young boy had taken to a life of withdrawal and meditation.

Shaunaka intervenes to ask a question. “How is it that Suka, who has withdrawn from everything in this world, agree to study Srimad Bhagavatam with his father?”

Suta, the narrator, said, “Though Suka was withdrawn from the world and free from all knots of bondage that may tie him to even any study and practice, the nature of the supreme called Hari is such that it can even attract such great renunciates like Suka himself.”

Suta began the narration of the Bhagavatam panning the camera of his vision to the end of the Mahabharata war. Duryodhana had been hit in the thigh by Bhima and was lying almost dead. At that time, Ashwatthama, son of Dronacharya, thought he would please his master Duryodhana by doing a dastardly act of dismembering the heads of the five sleeping sons of Draupadi. Even Duryodhana was disgusted with this inhuman act.

Arjuna resolved to console Draupadi’s grief and went after Ashwathama, who was by now repentant. Yet wishing to save his life, he sent the powerful Brahmastra at Arjuna. Arjuna saw the weapon coming in his direction and fervently prayed to Krishna. Krishna the master suggested to Arjuna that Ashwatthama does not know to call back the weapon, “hence send a counter missile and put out the flames”. Arjuna did a circumambulation of his friend and master Krishna and fitted an equally powerful Brahmastra.