Akshay Narvekar, founder of Bombay Shirt Company (BSC), has joined the big league. The India-based bespoke shirt manufacturer opened a flagship store in New York last month, which means that he is one of the major players in customised tailoring for men and will rub shoulders with industry populars such as Stantt, Alton Lane, M Tailor, Indochino, Marcella and Proper Cloth.

Speaking from his Mumbai studio, where the company was launched in 2012, Narvekar, says, “Being in a city like New York means we are in the spotlight and are being measured against some of the best brands in the world. We need to work extremely hard to match up to expectations from a product, service and aesthetic point of view.” 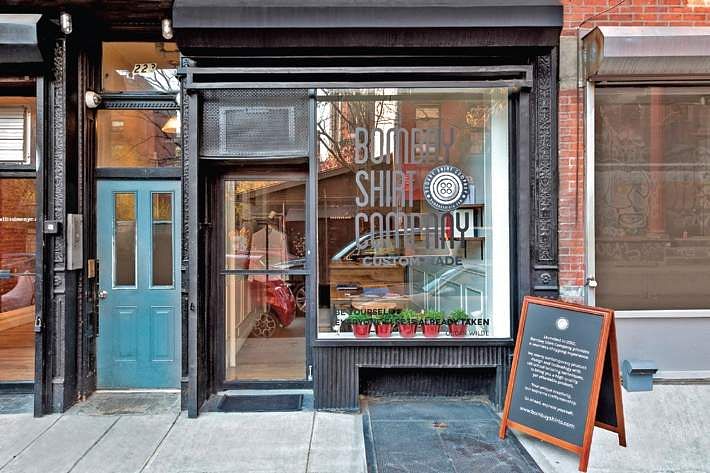 The store, located at 223 Mott Street in SoHo, is the first North America location for BSC. Here, clients can select from a wide range of custom details—from the type of cuff they want to the collar and cut they prefer, without affecting the price of the shirt or stretching the two-week delivery time. “Our aim has always been to become a global brand. Nothing spells global more than New York City. Also, finding the right partners is key, which we were able to do in the Big Apple.

We have proved our mettle in Dubai (the store is located in The Central Park Towers, DIFC), which is another big fashion outpost and it was time to grow,” reiterates the young designer, who moved to Los Angeles to pursue his dream of working in apparel and fashion after completing his undergraduate studies at the University of Michigan.

He honed his expertise for five years working with the luxury label BCBG Max Azria, in their strategy and operations group. “When I moved back to India, I was pondering over starting my own venture. While many ideas did germinate, I was pretty convinced that it had to be in the apparel space.” It was Narvekar’s predilection for custom-tailored shirts that propelled him to set up something in this space.

“I’d buy fabric, trims and accessories and take them to my local tailor. After a while, the process got cumbersome. I searched online for e-commerce options and was taken aback by the lacuna. A personal need for a one-stop shop to customise my shirts drove me to build the Bombay Shirt Company,” Narvekar recalls.

Business took off and soon a second store in Mumbai as well as stores in Delhi and Bengaluru were launched. Today, the company has six boutiques in India and one in Dubai in addition to the latest one in New York. BSC recently opened stores in Kolkata and Chennai and there are plans to tap Hyderabad, Pune, Jaipur and Chandigarh. Boutiques will also be set up in London and other cities around the world.

Marrying contemporary product design and technology with old school tailoring techniques, customers can design and personalise a shirt from an extensive selection. Says Narvekar, “The SoHo boutique is staffed by experts who measure each customer for the perfect fit and stylists who are trained in the intricacies of fabric and guide each customer through design options. The shirts are delivered approximately two weeks later.”

Mulling on the choice of the name, the design entrepreneur says he wanted something that was simple, classic and would stand the test of time, while proving that quality product and service can originate in the Maximum City. But surely, he’s having to change the game plan  for the connoisseur in New York? “Not really,” he says, adding, “With people travelling extensively nowadays, there is homogeneity amongst the customers irrespective of geography and demography. Everyone is looking for well-made shirts at a reasonable price point.

We have noticed that in both Mumbai and New York, the popular pick (also my personal favourite) is our Japanese collection of soft brushed cottons and linens. They do rather well in our Dubai store also. We showcase the finest fabrics ranging from Egyptian cottons, linens, denims, flannels and more that are sourced from some of the biggest mills in Europe, India, Turkey and Japan.”

Unlike any other custom handcrafted shirt company, BSC manufactures everything in-house at several facilities in Mumbai, so it is able to offer its shirts at a competitive price. The company does so in a socially conscious way. It provides local entrepreneurs with the micro-financing they need to set up factories that manufacture shirts for the company. “We are fostering a new breed of entrepreneurs and as we are the only client, the quality is not compromised. Real luxury is in tailored apparel. It takes time but it’s bespoke,” rounds off Narvekar.