Frames from the wild

This wildlife photographer, who was recently ranked second in the enviable list of Top 100 Photographers by an iconic German photo lab explores the mysteries of the forest.

The temperature was -30° Celsius and it was mid-February in Mongolia. Sitting in his tent in the middle of the snowy Altai Mountains of Central Asia, wildlife photographer Thomas Vijayan was shivering despite wearing six layers of clothing. The BBC People’s Choice award winner was there to shoot the Pallas’s Cat, which is categorised as ‘near threatened’ by the International Union for Conservation of Nature. It took Thomas 10 days to get the exclusive pictures. “I had never experienced so much cold and been in such a remote place before. It was an unforgettable experience,” says the 48-year-old. 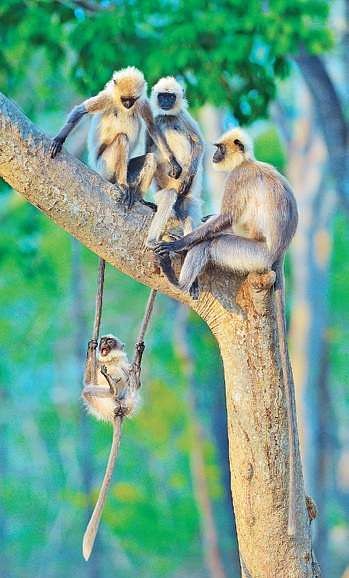 When Thomas flew home to Toronto, he got the happy news that he was ranked second in the Top 100 Photographers by the German photo lab Xxlpix.Thomas, who had been having an affair with the camera since childhood, has been capturing award-winning scenes for a while now. At the Bandipur National Park in Karnataka several months ago, while travelling in a jeep, he noticed a group of grey langurs on the branch of a tree. The animals were making squeaking sounds. Suddenly, a baby monkey jumped down and caught the tails of two of his relatives, and used them as a swing.

He wore an open-mouthed grin while his tribe smiled at him indulgently. Thomas immediately clicked a few shots. But within a few seconds, the baby had jumped on to a branch. “I am glad that I was able to shoot it. There was so much life in that moment,” says the photographer, who is also an architect and runs his own firm in Canada.

The lungur photograph titled, ‘Fun Time’, has won a few awards. In August 2017, Vijayan travelled to Tokyo to receive an award from the prestigious Smithsonian Museum in New York. “The judges said they liked the story-telling in the picture,” he says.

Vijayan, who belongs to Kottayam in Kerala, shifted to Canada in 2007 for better work prospects, and has travelled places such as the North Arctic, Antarctica, Alaska, Tanzania, Kenya, Japan, Russia, Ecuador, Costa Rica and Indonesia pursuing his hobby.

The animal he likes to shoot the most is the tiger. “I admire its strength and beauty. So far, I have images of more than 150 different tigers from across the world,” says Vijayan. His attraction towards photographs led his parents to gift him a camera when he was just twelve. His bravado in the forests, to which he was naturally attracted to enabled him to take the difficult-to-get photos of new-born cubs, and live kills in the wild. “I love the forest. I feel recharged after each trip,” says Vijayan, who uses a Nikon D5 for all his pictures.

His tips to young photographers: “Always respect wild animals because we are entering their habitat. Move silently and use a big lens. And focus on the quality rather than quantity”Vijayan received the ‘Highly Honoured’ award at the Oasis Awards in Italy last year. Heeding the call of the wild continues to take him to the heights of skill and satisfaction.

Now we are on Telegram too. Follow us for updates
TAGS
Thomas Vijayan wildlife photography