Greenr Cafe was established by product developers Nitin Dixit and Mohit Yadav in 2015.

Green is the new colour of the food business. And that’s the idea behind India’s first California-inspired plant-based kitchen Greenr Cafe, which has been pushing the preferences of Plant Protein (PlantPro) in the National Capital Region. A rising phenomenon in food trends the world over, PlantPro is tickling the taste buds of both conscious eaters and experimental foodies, catering to both vegetarians and non-vegetarians. It mainstreams complex plant-based proteins, giving nutritious, delicious, healthy and sustainable alternatives from vegetarian sources. Greenr Cafe was established by product developers Nitin Dixit and Mohit Yadav in 2015. It has two outlets over a period of three years—one at Vasant Vihar in Delhi, and another at 32nd Avenue in Sector 15, Gurugram. Elucidating their USP, Yadav says, “We have specially engineered a range of plant-based proteins, including Shroomballs, Pea Pro, Bean Pro, Tofu Amaranth, Hemproot and Sweet Potato, a suitable replacement to the nutrients and textures that we usually get from animal meat.”

The first outlet at Shahpur Jat, which has now shifted to Vasant Vihar, started off as a modern health cafe, which served 100 percent vegetarian or vegan food with retail space for various Indian artisanal food brands from across the country. In the early days, its clientele included more of expats, and less of locals, some of them being hardcore meat eaters, but now 90 percent of their customers comprise local crowd.

Not just food, the core idea of being green spills over to the interior design and decor, cutlery and even food delivery packaging. “The food is delivered in 100 percent biodegradable boxes. For this, we have collaborated with a company called ECOWARE,” says Dixit, adding that the cafe uses only paper, bamboo and steel straws, composts and reuses daily coffee waste and uses only glass bottles.

The plan to have only two eateries in NCR was a deliberate choice, and in the offing are outlets in Mumbai and Bengaluru, and a takeaway facility in the coming months. “The idea was never just about numbers. Ours is an experiential place."

The owners plan to hold monthly events—workshops dealing with aspects to make Greenr a part of our lives.With food as the main focus, Greenr also doubles as a popular co-working space and a hot spot for hosting events. 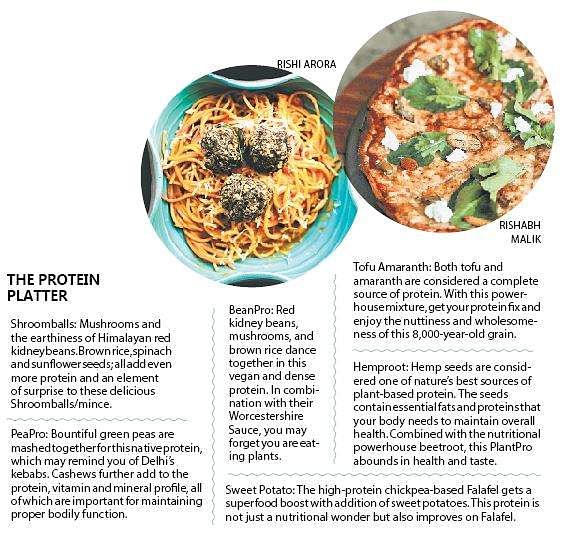 Stay up to date on all the latest Magazine news with The New Indian Express App. Download now