In the age of Facebook where online social existences are a daily ritual, Gurugram-based performing artist, who calls herself Princess Pea, is still skeptical about the idea of her newfound social presence and refuses to share her real identity. Choosing to remain anonymous, Princess Pea is an artist who wears a large pea-shaped headgear and presents to the world her alter ego in the form of a ‘living toy’—an anime style figure that can neither talk, smell nor hear. The large anime head came from the simple idea of gaze and was an outcome of early drawings on paper.

The artist’s practice revolves around the ideas of identity, notions of perfection, self-worth, and conflict between traditional and contemporary roles of women in the Indian society. From wearing the head herself, Pea has gone to share the unique experience with other women as well. About the head, Pea reveals, “It acts as an apparatus between the outside world and the self. The head has evolved with time and after the first classic green head, there is now a new white head, which is worn by women, who I meet. Through this avatar, I help people share aspects of themselves in a different light.” 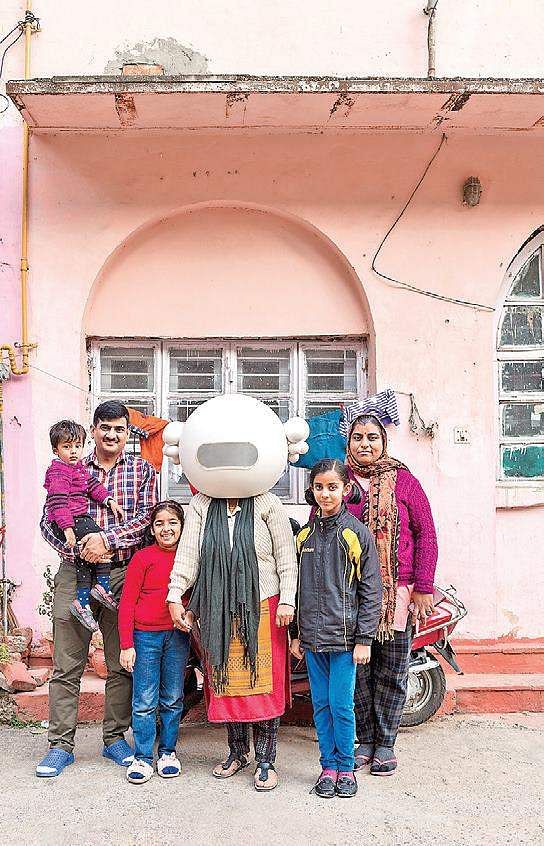 Pea began the project with the idea of passing on the character, and living different lives to understand the complexities therein. “The most interesting part of this process is ‘exchange’ of emotions, knowledge, life’s lessons, and to take notice of the life of different people. I have been interviewing women in their houses, at work—in the spaces they have made, and invested themselves in. They then take a photograph wearing the head for a day, looking at the other world, the one they’ve always ignored—one which the mind desires and aspires,” says Pea about her modus operandi.

Her current project, ‘Proxies’, fuels by meeting a set of women who perform their daily lives in a public space, marked by their most intimate ephemera and soul stories in an act of negotiating and claiming the public sphere in an alternate dimension. “It is a universe where they take the road to living the other life that they could have lived,” she says, adding, “The project is an ongoing series that maps various states and cities of the country. It eventually takes the shape of an exhibition and acts as a book that contains a chapter each from different regions of the country where I go such as Delhi, Mumbai, Goa, and Gurugram. Through this alter ego I aim to highlight the issues and concerns of women.” ‘Proxies’ aims to be an ongoing project for life as it is also an artistic process with the quest of searching the right, the wrong, and what can be corrected for a better future. The project has so far engaged with the local community and was initiated from her studio in Gurugram.

It was also exhibited at India Art Fair 2017.

Pea recently collaborated with the housewives from Lodhi Colony in Delhi along with some school, college, and office-going women. “Soul Sisters, the image with a double head, is applied to the subjects when I find a connection between two people. Another anime head, a joint one was created to enable these conversations with two people, as I believe it can be intimidating to have someone in close proximity. The gaze can be intimidating, and so can be the knowledge that someone else can hear you.

The process was an illustration of talking to someone you just met,” she explains about evolving with the need of the situation. Her work has also evolved from drawings to miniatures, manga silk paintings, performances, photography, sculptures, and even limited edition wooden toys. In the past, she has collaborated with fashion brand Pero, Lakme Fashion Week, DYSCO, and others as she likes to juxtapose the practices to find a new subtext and build new narratives.

Her works are feature projects with craftsmen of Etikoppaka in Andhra Pradesh to develop a new series of toy sculptures. Also lined up is a project with a brand named MIXX to empower girls and to create equal opportunity for them in sports.