The midnight air reeked of mahua as beats of dhol, madol, and the munda baja echoed from the Danteshwari temple grounds, in Chhattisgarh.

The midnight air reeked of mahua as beats of dhol, madol, and the munda baja echoed from the Danteshwari temple grounds, in Chhattisgarh. It’s the sixth night of the Phagun Madai, a nine-day tribal festival which is in practice for the past 700 years in Dantewada. Men and women in traditional attire and accessories associated with each tribe in the region fill up the courtyard. The hunters, two men wearing a hunting uniform—simple, skimpy, loin clothes—jovially interacted with the audience as they waited for the act to begin.

Since hunting is prohibited, humans enact the role of the prey that tries to run away to safety but are tactically driven towards the hunting zone and finally, netted and symbolically, ‘hunted’. The actor emulates four animals—rabbit, deer, chital and bison—being hunted on the nights of the festival. “The actor who plays the roles of the prey is also decided by custom. He belongs to a particular family from a particular tribe,” explains an elder. The hunters are usually the chiefs of the various tribes.

As the act begins, the crowd giggles, whistles and coos as the hunters run after the prey. The prey, dressed to emulate the animal, expresses the vulnerability of the innocent forest creature—its fear, panic and finally resignation. The crowd breaks into a jive as soon as the prey is captured, setting off another round of rituals of offering prayers and gifts to the Mother. 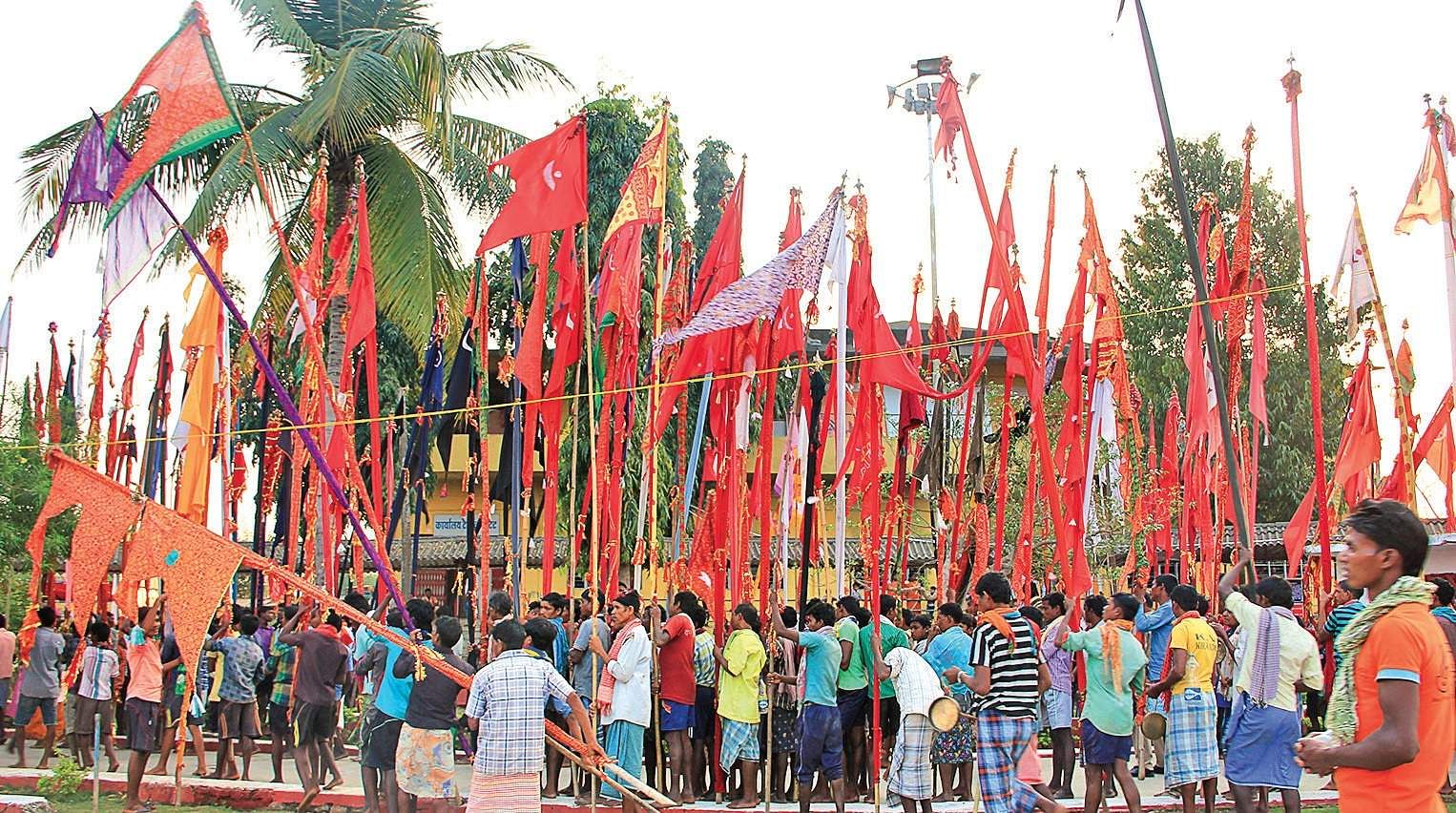 Over 500 tribal communities including Gondi, Dhawla and Halba collect in this small town, with their local deities. Nightlong jatara or folk theatres continue in another part of the temple campus. Scent of mahua and salfi—drinks made from the sap of these trees—fills the air, while the tribal folks in colourful costumes energetically present their rituals to venerate Goddess Danteshwari, who is considered the chief of all deities in the region, and thank her for the year’s harvest.

Harindranath Jia, the priest of the Danteshwari temple, explains that Raja Purushottam Dev started the festival to promote social interaction in the region. “Every afternoon, there’s special puja, followed by the palki (carriage) of the Goddess taking her out for a ride with the local deities, around town. On the ninth evening, we observe Holi ka dahan—the symbolic burning of evils. Rangbhang is observed on the tenth day marking the beginning of another agricultural year.”

The festival is at its best when the goddess is on her way around town. As the procession starts, CRPF jawans make their signals, firing bullets as a mark of respect. Then different tribes break into their typical dances. Women in orange, red, yellow, and white saris with flowers adorning their heads and arms, lead their groups. The men with their headgears, jewellery and accessories play their tribe’s musical instrument. Others carry the deities in colourful chowkis or palkis, heaped with marigold or hibiscus. The massive crowds throb in a common sensation of joy.