The world is getting smaller. The plate is getting larger. Cuisinistas and travellers are led by their taste buds seeking new palate experiences. On their bucket list is to discover local recipes such as the Masala Dosa of Tamil Nadu, the Blinis of Russians and the Goulash of the Hungarians.

The food industry too has woken up to this growing vegan and vegetarian population. However, there are countries whose traditional kitchens are anathema to vegans and vegetarians in South Asia and Europe.

For example, what Japanese call vegetarian is cooked in Dashi—fish broth. The Thai Khai Jiao is an egg omelette cooked with tofu, vegetables and rice that is considered vegetarian. While being a vegetarian certainly does restrict you from a few spots, it’s not the kiss of travel death.

Dhananjay K Chitre, who runs a travel agency in Pune and Mumbai, says,  “Thailand is one of the most sought-after destinations for Indians. But for every 10 queries we receive on the country, there are at least four asking about the cuisine and whether there would be vegetarian options available easily. I had an entire Marwari family—almost 18 members—wanting to go there to celebrate a wedding anniversary, but their demand was pure vegetarian food sans onion and garlic for some senior family members.”

A whopping 1,471,218 Indians visited Thailand, one of the most popular tourist spots, this year (till September), according to the Embassy of Thailand in New Delhi. Regardless of popular notion, Thailand has the most diverse cuisines across the world. With its popular tender coconut ice cream, Pad Thai Noodles and Kaeng Kiew Wan (green curry) taking over the world, vegetarian food options are plenty.

Popular destinations such as Germany, Turkey, Spain are known for their wursts, doner kebabs and chorizos, but that does not necessarily mean that these countries do not have any vegetarian specialities.

Veg dishes often remain lesser-known in the fast-evolving world of gastronomy. “Globally, vegetarianism is trending and is in vogue.

Having veg and vegan options has become essential. Also, using local produce is the order of the day. Many countries are diverse and abundant in produce and can offer a wide variety of options to herbivores and carnivores.

As the demand is shifting, chefs and restaurants—not to mention local street foods—are including more vegetarian and subsets of vegetarian options. Even European and Nordic countries have seen a surge of veg and vegan cuisine. In fact, almost a decade ago I was amazed to dine at an all-veg macrobiotic restaurant in the heart of Paris,” says Tarun Sibal, co-founder of a Goa-based restaurant, Titlie.

For every piece of roast meat, there’s a vegetarian alternative. While cured ham is considered a delicacy in Spain, so is the Paella (rice and beans) and Gazpacho (cold soup of raw vegetables).

Another beloved tourist spot,  Greece is known for its Mediterranean fresh fish and Souvlaki (meat skewers) but there is also the Greek national dish Moussaka (baked auburgine) and Kolokythokeftedes (zuchini fritters) that one can pick instead.

Increasingly, people are also turning to vegge-ism due to health, religious and ethical reasons. Travel blogger Ajmira Khan, who turned to veganism a few years ago believes in eco-conscious travelling. She believes in leaving as less carbon footprints behind as possible despite her job of being a full-time traveller.

“I travel by land as much as I can. Eating local and eating vegan is a choice I made during the course of my travels. It is restrictive especially when I travel internationally. However, I plan my trip according to my eating habits. I look up local dishes, ask around fellow travellers and see what are the local options I can obtain.

There is a rise in consciousness and it is a fallacy that meat is the only kind of dish available when travelling outside. For example if you are in France, which is a hub of modern European cuisine, besides the poulet (chicken) and poisson (fish) there’s Crepes, Ratatouille, Quiche, Patates Au Vin (french potatoes in red wine) and many other such veg dishes that one can eat,” she says.

Another such country is Australia, which is popular for its barbecues, meat pies and corned beef. But there are also Lamingtons, pumpkin soup, Pavlova that are strictly vegetarian items.

Nishant Kashikar, Country Manager (India), Tourism Australia, says that perspectives are changing, “Whilst Australia is known for its fresh produce, it has emerged as the culinary capital of the world among Indian travellers.

"Tourism Australia’s recent Restaurant Australia campaign and the popularity of reality shows such as Masterchef Australia and My Kitchen Rules have put the country on the map of every gastronomic traveller. As Indians have now started to travel on their tummy, Australia has seen a consistent increase in visitors from India that have grown at an average of 16 per cent over the past few years.”

Travel blogger Avigyan Dutta, who now lives out in Frankfurt, says, “In my time living in Germany and travelling elsewhere, I’ve learned a few tips for vegetarians. Savour street food.

Yes, a lot of it involves fried meat on a stick, but there’s plenty of veggie-friendly street food such as grilled corn-on-the-cob, Lebanese falafel etc. Eat all the fruit you can.

Big cities are most likely to have vegetarian restaurants or at least a much wider range of options. There are tons of countries with veggie-friendly cuisine, so check out your options in places like Thailand, Italy or the Middle East. Avoid fast food joints.

One shouldn’t travel halfway across the world to eat fries.”

Exploring a country through food regardless of restrictions can be rewarding and not deterring, says Chef Praveen Anand of ITC.

“If one is willing to make the extra effort to find good dishes or eating spots, they’ll probably be rewarded with an experience delicious an that of a meat-eaters’, and probably less food poisoning.” Bon appétit indeed. 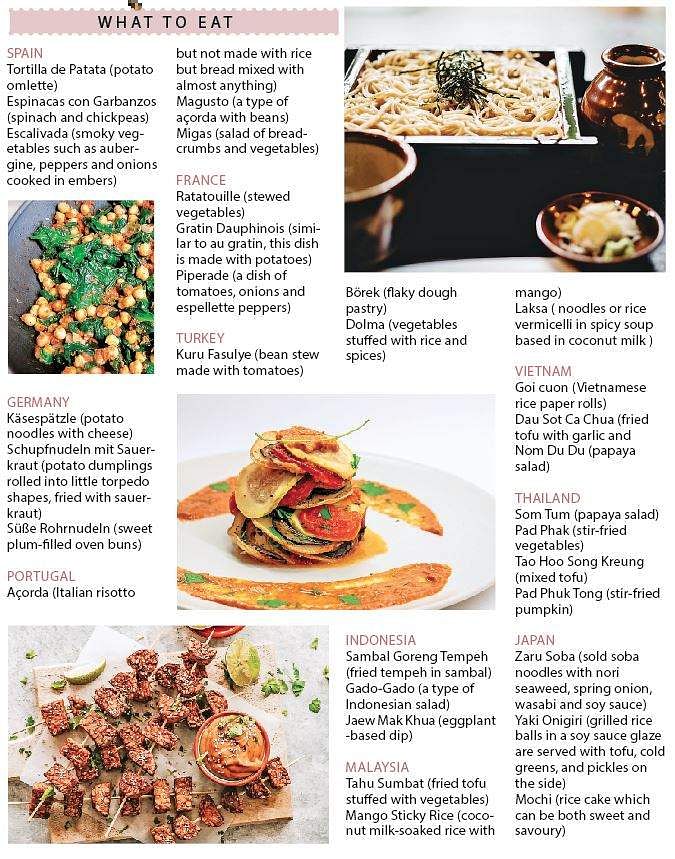 Food tips for the globe trotter

Get connected. There are tons of great resources online for and from fellow veggie travelers such as TripAdvisor, Eat Your World or local food blogs for the places you’ll visit

Before you arrive, look up vegetarian food options for that country or region so you know what to request when eating out. Indian, Thai and Italian joints are usually safe bets

Explore local markets, not just supermarkets. Markets are the best way to see all of the exotic, delicious food your current locale has to offer—much of it fruits, veggies, grains and spices

Learn to love sides. Mains in most places are meat-based. Lunch or dinner will probably involve a side of vegetables, soups or grains.

With inputs from MDY

Now we are on Telegram too. Follow us for updates
TAGS
foodies food blogging veganism vegans