The Battle for Pakistan: The Bitter US Friendship and a Tough Neighbourhood

Right from the time of its creation to now, 70 years later, Pakistan has had a mostly tumultuous relationship with not only its neighbours but also nations that it calls its allies. If on the one hand, Pakistan’s anti-India stance on nearly most things defines its relationship with the country it was carved out of, on the other hand, its sometimes sweet, sometimes sour ‘frenemy’ status with the United States sums up its rocky ride up until now. Shuja Nawaz’s The Battle for Pakistan: The Bitter US Friendship and a Tough Neighbourhood is not only the latest addition to the ever-growing list of treatises on US-Pak engagement but also tries to shed light on the path forward. 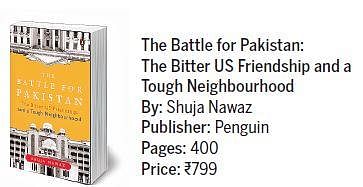 A globally recognised political and strategic analyst and veteran of many books, Nawaz reportedly began this book as an update for a new edition of his much-discussed book Crossed Swords: Pakistan, its Army and the Wars Within that explored the impact of Pakistan’s military-industrial complex on the nation’s history. In an address during the book’s release in Washington DC in October 2019, Nawaz mentioned that when he realised that the first chapter for the update had run into over 200 pages, he urged the publishers to take just an essay for the new edition of Crossed Swords that would free him to work on an entirely new book that untangled the complex US-Pakistan relationship in the past decade.

This is a period where the Americans found the brain behind the 9/11 attacks and at that time the world’s most wanted terrorist, Osama bin Laden, living in a state-of-the-art hideout in Pathan Gali that was at a short distance from the Pakistan Military Academy. With that at the back of one’s mind, the intrigue for reading Battle for Pakistan becomes far greater.

Drawing on extensive travel to the region, policy interactions, and many on-the-record interviews with key leaders, Nawaz’s book, on the one hand, is nothing less than groundbreaking, but on the other hand, makes you wonder if the people involved such as the political dispensation in both countries as well as the other players including policy makers, et al have any sense of the reality staring in the face.

At the onset, Nawaz makes a case for Pakistan’s current state being a result of “empty rhetoric and unfulfilled promises, arising out of the degradation of public institutions and absence of good governance”, which, according to him, is a disease that ails “many other struggling former states once governed by colonial Britain.” It’s not like Pakistan hasn’t struggled to define itself. Nawaz makes it clear that since its creation in 1947 neither its leaders nor its people have been able to clearly define what country Mohammed Ali Jinnah wanted to place on the map of the world—“an Islamic state or more liberal entity where Muslims could pursue their lives alongside other religious groups.” It’s one thing to say that Pakistan finds itself in a tough neighbourhood but it’s entirely different thing to acknowledge how much of this neighbourhood, namely Afghanistan, India, Nepal and Sri Lanka, were pushed into a tough spot thanks to state and non-state actors from Pakistan.

Irrespective of how one views Nawaz’s work or a bias that permeates within the reader’s mind, rather unwillingly, of course, a book such as The Battle for Pakistan: The Bitter US Friendship and a Tough Neighbourhood makes for a compelling read. It puts out the intricacies surrounding the US-Pak relationship as plainly as possible and in this regard it offers a much-needed insider’s perspective.
In the light of the confusing relationship that the United States shares with Pakistan, Nawaz also puts out a road map of kinds for the path ahead.

Two anecdotes in the book sum it all up. In 2008, the then ISI chief Lt Gen Ahmed Pasha explained the actions of outfits such as Lashkar-e-Taiba (LeT) to Pakistan’s ambassador to the US, Hussain Haqqani, as “our guys but not our operation.” A few years later, when President Obama was presented with the serious concern if Pakistan, which was technically an ally, were to engage with the Seal Team Six during their mission to retrieve Osama bin Laden from Abbottabad, he reportedly said, “That’s interesting”, and turning the Air Fore Chief of Staff asked, “What do you need to rain hell on Pakistan—because my guys aren’t surrendering to anybody.”

Now we are on Telegram too. Follow us for updates
TAGS
The Battle for Pakistan The Bitter US Friendship and a Tough Neighbourhood