These, Our Bodies, Possessed By Light: The storyteller’s tale

Besides the common DNA threading these women, a focal event binds all five into one frame.

Dharini Bhaskar’s debut novel, These, Our Bodies, Possessed by Light, draws its title from the poem, ‘Scheherazade’, by Richard Siken. Giving us a clue to where its uniqueness lies. Not in the story so much as in the telling of it. The legendary Scheherazade, doomed to die in the dawn following the wedding night, by the order of Shahryar, her insecure, despotic royal husband, had evolved a strategy for survival: storytelling. Being a clever woman, she’d stop the narration at a tantalising twist, leaving the sultan waiting for more. Thus, she earned herself a stay of execution for a thousand and one nights, till eventually the death sentence itself was reconsidered to a Happily Ever After. 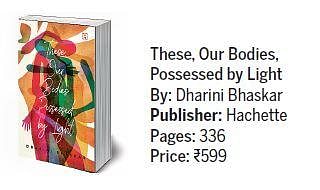 In this novel, Deeya, the middle child and hence the keeper of tales, is imprisoned in an existential crisis of her own: A love affair with an older man has led her to marriage with a man whom she can neither love nor hate. This husband, a shippie, is due to return home shortly. ‘In a week, he’ll ring the doorbell, ardent and ship-soiled and wanting. What to say as the husband approaches?’ As she mulls over this all-important question which will decide her future, Deeya reconstructs her life as well as the stories of three generations of her family’s women. In all, five women: Amamma the grandmother, who ‘stepping out of a gate, did not turn back’; Vanaja, the mother, ‘with postcards that can’t be posted’; and sisters ‘Tasha-Ranja with selves that have vanished, dust to dust.’

Besides the common DNA threading these women, a focal event binds all five into one frame. This is provided by the father of the three girls, the man who married for love but left for art. As she waits perennially for her husband to return, the key to the mother’s story is in turn secreted in the grandmother’s story—her budding love for a boy, as well as her life with the man who made her his second wife. The absence of choices and the subsequent creation of them is what Deeya imagines, in chapters that hopscotch nimbly between the present and the past. All the while cleverly co-opting the reader into a secret pact: Read, read on, read the subtext. Just as Shahryar’s silent absorption was a sign of the interior monologue that Scheherazade’s storytelling triggered in him—the precursor to a changed mind—the reader of the novel is drawn in by the precise, seamless layering, the ease with which poetry, myth and philosophical insights are blended with personal stories. Skilful telling, this. Not just craft but witchcraft.

‘We’re doomed to spend our adult lives recovering from our childhoods,’ says Deeya to the new man in her life, the one who has suddenly appeared, triggering off the whole storytelling exercise. Its purpose, seemingly, is to reach for clarity, but that also hinges on the reader. For instance, if Shahryar, put off by the disloyalty of women, were to read this novel, would he reach the conclusion that women are faithless for a reason: the men they marry? Indeed, it is with the portrayals of the men in the novel—the artist, the writer, the shippie, the photographer—that there is a problem. Lacking heft, they are the only flaw in this consummate debut.

Stay up to date on all the latest Magazine news with The New Indian Express App. Download now
(Get the news that matters from New Indian Express on WhatsApp. Click this link and hit 'Click to Subscribe'. Follow the instructions after that.)
TAGS
These our bodies possessed by light