Thai-Indian artist Amonwan Mirpuri’s work is inspired by the dark pain of traumatised women, having experienced such pain herself. She hopes it will start a global conversation on the subject.

Renowned contemporary Thai-Indian artist Amonwan Mirpuri paints to redeem scars with colours. Her recently concluded show Dear Women at Method Art Space at Kala Ghoda, Mumbai, is a tribute to all women who have been abused, suppressed or were victims of assault. To take their unheard voices out of the silence, empowering women marginalised by social trauma and illuminating those who need to be taught to evolve.

Elaborating on her recent show, Mirpuri says, “Dear Women is about the four stages of trauma women go through as the direct result of an abusive experience like harassment, rape, domestic violence and any other related form of abuse. The Wall of Disruption, the Wall of Acceptance, the Wall of Healing: Kintsugi “The Art of Precious Scars”, and the Wall of Reintegration—Turning Trauma into Triumph—are masterpieces of mediums and experiential emotion. Although the concept revolves around women, it is not limited to them alone because on a vast scale, everybody has experienced trauma in some form or other. We all go through the cycles of breaking apart, putting ourselves back together, struggling to find that place where we belong, tackling our mental struggles, and even finding a place in society where it is acceptable for us to be undeniably ourselves. The purpose behind this exhibition is to break the norms society has provided for us.”

Mirpuri grew up in multicultural household, with a Thai mother and an Indian father. “My upbringing was rich in culture and tradition. At the same time, attending an international school and hanging out with friends from around the world exposed me to western culture.” The cultural ‘chutnification’ set her on an identity quest, bringing her close to the underground scene and experiment, and be involved with different subcultures. She admits to being “a lost and troubled kid who used art as a form of escape”. The significance of direct experience in an artist leads to intense expressions; the largely self-taught Mirpuri had experienced abuse first hand. “I think art is my calling for a purpose,” she says. To harmonsie the longitude of expression and the latitude of creativity, she made peace with her past. This was the chrysalis for healing and growth, generating the hope that her art will heal similar traumatised women. Mirpuri doesn’t believe in limitations: she works with oil, acrylic, graphite, charcoal, Plaster of Paris and resin. She is also drawn to Performance Art. 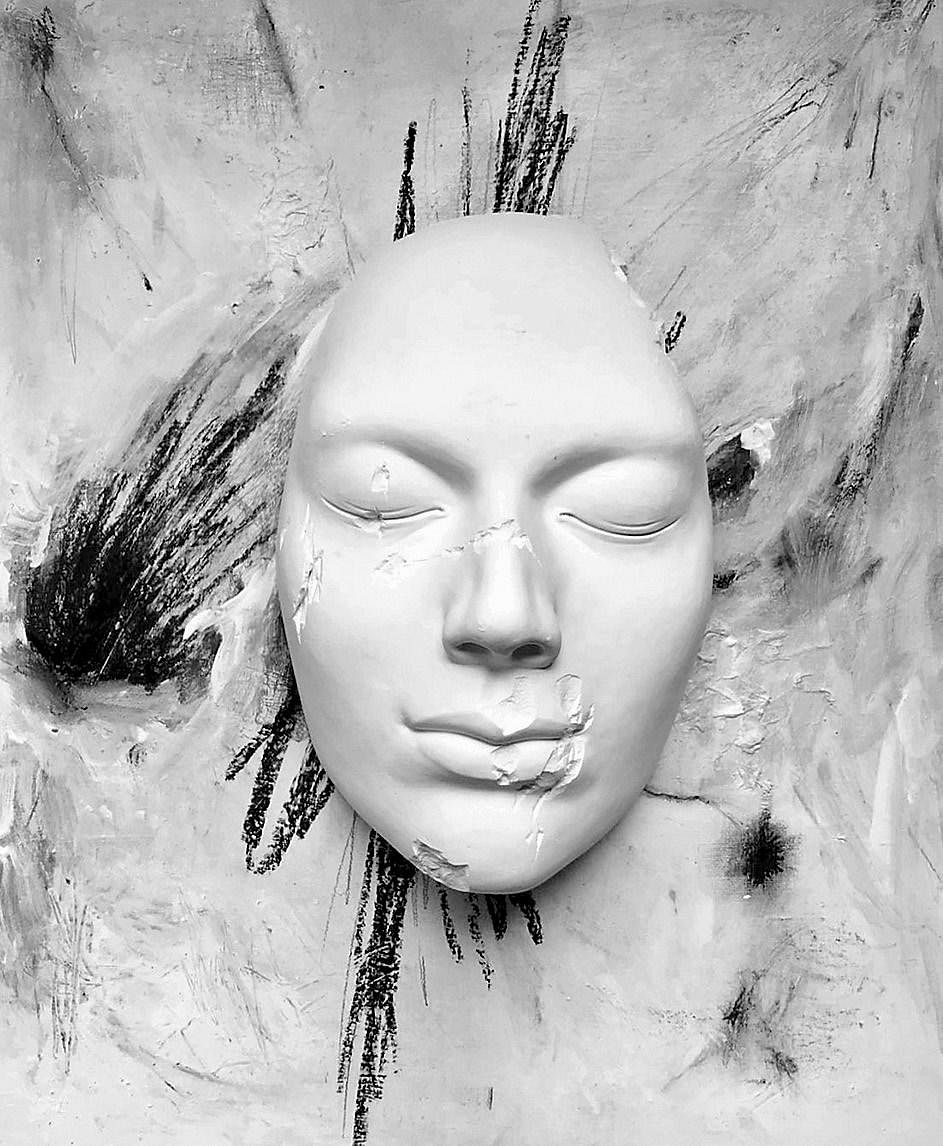 In September 2015, at an exhibition in Bangkok, she sat on a chair in the middle of the exhibition room with a projector patterning her person with visuals. A pair of scissors were kept by her side and each visitor was invited to slowly cut her hair and finally shave her head as her recorded voice played on alongside. “It was like rebirth or transition,” she explains, smiling at the memory.

She thinks that working intuitively requires you to be the vessel for something bigger to come through. “It is a humbling experience— first addressing the insecurities, fear and the doubt that arise and then from a space of openness, allow the creative process to happen, allow the intuition, the movement from within to surface. You start to create from a purer space, for the experience to be real,” she adds.

Inspired by the journey within and everything in between, Mirpuri works around the concept of energy, states of consciousness, and the human psyche. Her art is an invitation to examine oneself and how we interact with the world using beliefs that have been passed down. It also questions and inquires into the beliefs we have accumulated for ourselves and raises questions about ourselves. “The break, the fall, the buildup, what we are as energy, as an identity, as a collective, what we revolve around and the experiences that mould us are from where I gather my inspiration,” she explains.

Dear Women could soon go on a tour to different countries if Mirpuri has her way. She believes it is important to make the show part of the global vocabulary for a meaningful conversation on gender trauma to evolve. To continue to forgive, to heal, to love, to transmute pain to power, and to speak from a conscious space of vulnerability is the only way to reach true change, she says. She is already almost there.

Stay up to date on all the latest Magazine news with The New Indian Express App. Download now
(Get the news that matters from New Indian Express on WhatsApp. Click this link and hit 'Click to Subscribe'. Follow the instructions after that.)
TAGS
Amonwan Mirpuri Dear Women