Divine plates to mortal mouths: Here's a look at the best temple food from across country

Temple food has been the custodian of our divine history. Here’s taking a look at some of the most prominent ones.

Innumerable temples in India date back hundreds of years, if not thousands. They also offer divine food with specific tastes—a prasad sautéd in a particular way or a bhog made with exclusive in-house spice mixtures. They are cuisine markers for interpreting the culinary history of a region and some of them are found regularly on the tables of mortals.

Masala Dosa at Sri Krishna Mutt, Udupi
In the 13th century, Sri Krishna devotee Madhvacharya established the order of Udupi Mutt. His philosophy is different from Advaita Vedanta and is founded on the principles of Dvaita Vedanata —Dvaita Vada and Tattva Vada. With thousands of devotees, Udupi came into prominence on India’s religious map. The Udupi Mutt has climbed up the Sattvic food ladder thanks to its wide use of local vegetables and lentils in prasad. The god is offered an array of vegetables like ash gourds, pumpkins, sweet potatoes and yams. The Udupi Mutt’s global export is the omnipresent Masala Dosa. Yes, the one that connects Manhattan to Moolchand, Melbourne to Mangalore. The dosa meant for prasad is a simple rice pancake served with a dollop of white butter and potato mash sans onion and garlic. The Mangalorean Shettys and Naiks started eateries around South India where chefs added onion and curry leaves to the original. 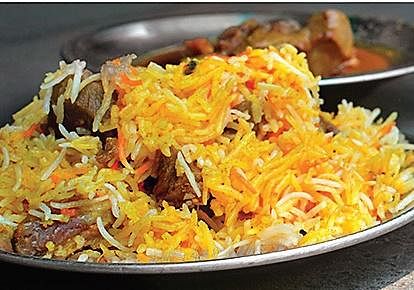 Biryani at Muniyandi  Swamy Temple, Madurai
This temple traditionally serves mutton biryani as prasad. Muniyandi  Swamy is a regional Tamil guardian deity, quite popular in parts of Sri Lanka and Malaysia too. Muni means servant of Shiva. It also refers to warriors, kings and sages who achieve ‘muni’ status  after death. Every January, a three-day festival is organised at Vadakkampatti village in Thirumangalam taluk of Madurai district. Over 2,000 kg of rice and mutton are cooked on a wood fire in 50 huge cauldrons all night long and served to the deity at 4 am, after which it goes to devotees from 5 am onward.

Mahaprasad at Jagannath Temple, Puri
It takes the Mahasupakar Sevayatto—an army of around a thousand cooks, to feed 50,000 pilgrims who come to Puri each day. On the menu are 56 types of items that please Lord Jagannath. The Mahaprasad is cooked on the premises of the eponymous temple at Ananda Bazar. As per the temple committee, this is served to 20,000 devotees daily and on special occasions to about one lakh visitors. The ingredients are 50 quintals of rice, 20 quintals of lentils besides humongous quantities of vegetables like red pumpkin, yam, brinjals  and more. Legend says that these aren’t cooked by humans. It’s believed that the ingredients are put in earthen vessels and kept on fire to be stirred and cooked by the god.

Khichuri Bhog at Belur Math, West Bengal
Swami Vivekananda established Ramakrishna Mission and made Belur Math the headquarters. Vivekananda was a foodie in his early years. Before beginning his ascetic life, he had established the ‘Greedy Club’ in Calcutta. These were a group of like-minded people who discussed cuisine and ended the evening with potluck supper. Khichdi might be India's national dish but the khichuri consumed as bhog during Durga Puja at Belur Math, is unique. 40 monks and fourty sevaks are entrusted with the job of cooking in six large cauldrons. The formula is 10 kg rice, 13 kg moong dal, 10 kg of mixed vegetables and pumpkin chutney per every 100 hungry devotees.

Panchamirtham at Murugan Temple, Coimbatore
Located 150 kilometres southeast of Coimbatore in Tamil Nadu, Arulmigu Dandayudhapani Swami Temple at Palani is one of the six abodes of Murugan or Karthikeya. This is the only temple in India where the prasad—panchamritam—has been granted the Geographical Indication (GI) tag, a sign used on products that have a specific geographical origin. A combination of five ingredients—banana, jaggery, cow ghee, honey and cardamom—it has a jelly-like consistency. Sometimes dates and sugar are added for extra flavour. The process of making it is automated. Devotees flock around the hill temple and stalls run by it in Palani, as they think the prasad can cure all diseases.

Stay up to date on all the latest Magazine news with The New Indian Express App. Download now
TAGS
Temple food temple prasad