The Flight of the Arconaut: Rise of the unlikely hero

The canvas Sophia Khan conjures up as a backdrop for her story is brilliantly detailed and intricate.

Fourteen-year-old Nyx Cormorant is a maverick. Extremely intelligent, defiant, and ever ready to thumb her nose at convention, at authority—at anybody and anything who will come in Nyx’s way. At the same time, though, she is a loving and devoted daughter to Admiral Cormorant and his wife Ephelia, a good (if often exasperating) younger sister to the beautiful Amsonia, and a dear friend to Eli, who suffers from an illness which could kill him any time.

And yet, Nyx is like few other teenaged heroines of fiction: for the world she inhabits is not ours, or not recognisably ours, even though it is filled with references to history and culture, myth and language, from all across the world we know. Nyx lives in Atlantis, a city that forms the pivot of a world that exists 3,300 years after a comet rammed into Earth, killing off most of Earth’s denizens. Nyx’s Atlantis is only vaguely like the fabled Atlantis of Greek myth: a grand city, yes, though with its seamy side. And with grand people—the Bulls, the virile, highly trained men who rule the land, and their Brides, the much-prized fertile women the Bulls must marry to keep the human race alive. 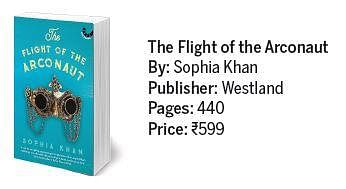 Against this backdrop plays out The Flight of the Arconaut, a story of intrigue and adventure as Nyx, trailing a mysterious brigadier visiting Atlantis, finds herself in deeper trouble than she’s imagined. At the same time, other secrets start unravelling, along with long-buried mysteries concerning Atlantis and its arch enemies, the nomadic Barbarics.

The canvas Sophia Khan conjures up as a backdrop for her story is brilliantly detailed and intricate. This is neither ancient Greece resurrected, nor a futuristic world. Instead, in classic steampunk style, this is reminiscent of old England, with organ grinders, penny dreadfuls, and gaslight. Landaus and phaetons ply on the roads, beside (and often behind) Nyx’s arcboard, the flying board that she is so skilled at manoeuvring. Thrown into the mix, and lending it more of a cosmopolitan feel, is the mixing of races and cultures, the ease with which personal names and the names of places marry the Middle East with Europe, for instance.

Then, there are the characters who people this book. The cast does tend to get unwieldy at times, but the main characters—Nyx and her family, Eli, the brigadier, and Azura—are well-etched. Nyx and Eli especially come through well, two teenagers who have to go through a lot more than their average contemporary. Nyx, pulled in different directions, caught between opposing forces, is a plucky, amusing and eventually inspiring heroine.

The plot is a complex one, with intrigue piled on intrigue, plots and counter-plots, and a huge array of characters, even many of the minor characters having their back stories explained in a fair amount of detail. While the pace is superb and the story gripping, this complexity at times gets a trifle overwhelming.
Overall, though, a very good book, a fine combination of adventure, steampunk, and coming of age. Plus, Khan’s writing style pulls you in: she can be deliciously witty, absurd at times, very wise at others—and highly readable.

Stay up to date on all the latest Magazine news with The New Indian Express App. Download now
(Get the news that matters from New Indian Express on WhatsApp. Click this link and hit 'Click to Subscribe'. Follow the instructions after that.)
TAGS
The Flight of the Arconaut