A gambit, in chess, means to make a small sacrifice to acquire an advantageous position, and this ‘flaw’ can be thought of as the gambit here, in a sense.

How do you make chess interesting for the outsider? The sport (or game, depending on which side of the debate you are) often bears a misconstrued image of being ‘boring’. Played in silence, devoid of evident excitement, with even spectators maintaining a stoic quiet. It is just two people, bent over a board of 64 squares staring intently at a bunch of oddly shaped pieces.

So how did The Queen’s Gambit capture the abundant drama that chess embodies? Well, it did, and some more. Elizabeth Harmon (Anya Taylor-Joy) discovers her flair for chess by accident at the age of nine, when her janitor, who teaches her the rules, recognises her potential. But The Queen’s Gambit isn’t just about Beth’s journey to becoming a chess superstar. Scott Frank’s mini-series effectively intertwines this sports saga with a coming-of-age story that beautifully captures Beth’s transformation from a gawky kid to a magnetic woman who recognises the power of her aura.

The refreshingly nuanced writing brims with emotional intelligence. Beth is magnificently complex as the kid forced to grow up. It is a rarity that a young girl’s agency is treated with such respect onscreen. An example of the impressive writing would be the equation between Beth and her adopted mother, Mrs Alma Wheatley. More than a mother-daughter relationship, both women find companionship on getting deserted by their respective worlds. The series could have easily reduced Alma to ‘The Depressed Wife’, and Beth to ‘The Intelligent Brat’. Instead, it gives us two real, jaded women who embrace each other’s flaws and support each other when they most need it. 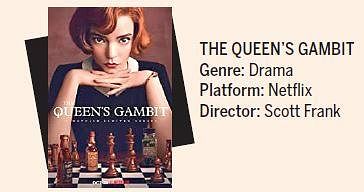 The visual language bursts with the same maturity as its writing. The tone is subtle, and the drama, exciting. The camera roves around the chess board, as the player’s eye would, before locking in on its target. The series also recreates the era quite well with its art production. Understandably, it doesn’t delve deep into the games but uses other techniques to convey the tension to the layman.

A terrific performance by Anya Taylor-Joy, who breathes life as Beth, in addition to the many other solid performances that add to the series’ appeal. While films usually stroll through the ‘only woman in the team’ bridge and ‘mansplain’ the footwalk, The Queen’s Gambit touches more nuanced territory. The only seeming flaw, in an otherwise terrific series, is that it can be too on-the-nose at a few places—especially with the flashbacks. But then, the depth of the writing washes over such contrivance. A gambit, in chess, means to make a small sacrifice to acquire an advantageous position, and this ‘flaw’ can be thought of as the gambit here, in a sense.

Will go ahead with tractor march in Delhi on Republic Day: Farmer unions