The star that lost her shine:A book on 'Parveen Babi' and her life

Much of the mystique that surrounded Babi was a result of what she told the press.

For an entire generation that grew up between the mid-1970s and mid-1980s, it was either Zeenat Aman or Parveen Babi when it came to defining the era’s oomph factor. Although Babi was among the most popular film icons of the period, and enjoyed a certain degree of box office popularity as well, as luck would have it, she was relegated to being in the shadow of Zeenat Aman. One wondered if this was more of a historian’s fallacy, but reading Karishma Upadhyay’s Parveen Babi: A Life, it becomes clear that Babi herself fashioned much of her on-screen image as well as her career on Aman’s lines. 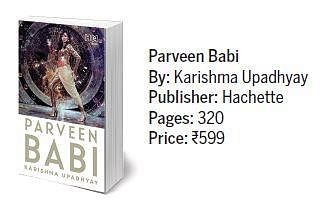 Some are born stars while others need to be created and few dominated the latter as Parveen Babi. It was during the shooting of a film, Ek Nao Do Kinare, in the early 1970s when filmmaker BR Ishara ‘discovered’ Babi among the crowd of onlookers. The striking looking Babi, then a college girl dressed in a T-shirt and jeans with a sling bag and cigarette in her hand, caught the director’s eyes. He asked the unit photographer to click some shots. The next day he signed Parveen Babi. It took a few years, and a bit of untangling of contracts etc—Ishrara and veteran actor-director Kishore Sahu, who had announced Parveen in his Dhuen Ki Lakeer had to sort out who’d get to ‘launch’ her—but soon the actress went on to become one of the most popular and talked-about stars of the 1970s.

Much of the mystique that surrounded Babi was a result of what she told the press. In hindsight, it appears that the film glossies, as well as the industry, pitched Babi as a direct competitor to Aman. Perhaps that is why the former might have opened up a lot more during her interviews. A significant part of this aura was a result of her being open about her affair with Danny Denzongpa, and later the much married and father of two, Kabir Bedi. But it’s not like Babi didn’t have it in her to be the ‘it’ gal of the decade. Upadhyay’s description of Babi’s college days—she wouldn’t wash her clothes for weeks—and her interactions with her close friends, what was called the ‘Juhu Gang’—a glamour bunch that included Shekhar Kapur, Mahesh Bhatt, Shabana Azmi, Protima Bedi and Jalal Agha, amongst other regulars such as Anju Mahendru, Parikshit Sahni, Danny, Chetan Anand’s son Ketan, and Akbar and Shah Rukh (the brothers of Feroz and Sanjay Khan)—reveal one of the original trendsetters of the Bombay film industry.

Some of the bits from previous interviews of Babi as well as those who were close to her such as Bhatt would be considered beyond scandalous today. But Upadhyay does not focus on that aspect. Instead, the narrative brings to life the tumultuous life and times of Babi with much poignancy. The part where Bhatt’s Arth rings too close to real life and what impact, if any, would that have had on Babi’s health, whom he had based much of the film on, is a must-read. Upadhyay also strings a lucid account of Babi’s public breakdowns and her leaving the industry at the height of her popularity.

Reading the book at a time when the Indian film industry is under scrutiny following the mystery surrounding the death of Sushant Singh Rajput and Kangana Ranaut’s statements, once again shows how the industry treats women.