What’s common between Mexico and India? A meal

Mexico and India have a shared love for food and all things spice.

What’s common between Mexico and India? As it turns out, plenty. Separated by seven oceans and thousands of miles, both the countries have a strikingly similar culture and a shared love for food. And by food, we mean the spiciest of the lot—from the bhut jalokia to the habanero. MKT at The Chanakya, Delhi, recently celebrated the Mexico National Day, showcasing some of the signature Mexican dishes. To say that it left a more than familiar aftertaste in the mouth would be an understatement.

A foray into this country’s cuisine from the other side of the Rio Grande brings up quite a few Indian favourites. And it leaves many a question in the mind. For example, did the humble rajma travel over land and sea to be presented as chilli con carne and burrito among others, or was it the other way round? Tortilla or roti—what came first? Likewise, burrito or kathi roll, what gets your vote? The questions here are probably as easy as the proverbial riddle: What came first—the chicken or the egg? MKT, of course, kept to the job of making good food rather than puzzling over the riddle. 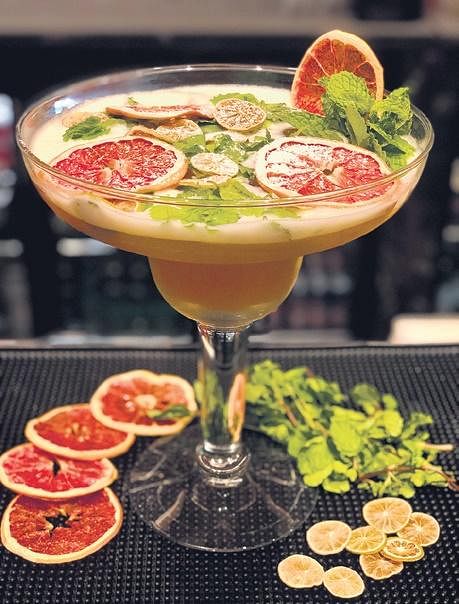 Starting with the Chicken Tinga Tostadas (deep fried loaded cornbread) and a variety of tacos, to margaritas with a twist and, of course, the absolutely delectable Tres leches cake (vanilla sponge soaked in condensed milk), it was a spread worthy of a gourmet. Tracing the relationship between the two nations, food historians are of the opinion that in the 14th century, the Portuguese brought the heat of Mexican chillies into Asia. One can see the usage of chillies in India growing in a bottom-up trajectory. While Goa and the Southern states quickly adapted to the fiery flavour, the kitchens in Delhi and Awadh took a long time to welcome the foreign spice.

Today chillies are used across the length and breadth of the country in almost all dishes. The Mexican salsa and its Indian counterpart, the chutney, are a must-have on most dinner tables. In the 15th century, it was India’s turn to return the ‘flavour’. Traders took with them tamarind into Mexico. While in India, we seasoned our sambars, rasams and, of course, the ubiquitous chutney with the tangy fruit, in Mexico, tamarindo is used to flavour sweets and drinks such as aguas frescas (a non-alcoholic beverage made from fruits). Just like the diversity of India reflects in its cuisine, Mexican cuisine too boasts influences from varied cultures dating back ages. In fact, even here the two countries share a common lineage—Arab food.

Both borrowed rice cooking techniques from the Arabs, where the rice is cooked like a pilaf by frying it with fragrant herbs. Funnily enough, even some kitchen equipment is the same between the two nations—a traditional kitchen will boast a mano y metate or grinding stone, molcajete or mortar and pestle, and the comal or griddle.

Indians always swear by their snacks—the oh-so-delicious and supremely unhealthy chaats and samosas top the list. Mexicans are not far behind—their love for antojitos (street food) or botanas (savouries generally served at beer bars) is legendary.

From charros (shakkarpalas) and tostadas (masala papad) to elote (chatpata corn), the foods are almost interchangeable with their Indian counterparts. And, did we mention dhania? For some strange reason both Mexico and India have a passion for cilantro. The more, the merrier. So would you like to try some Huevos a la Mexicana? Anda bhurji, to be precise.

Now we are on Telegram too. Follow us for updates
TAGS
Mexico National Day MKT Rio Grande