With Netflix’s Young Wallander, we get a modern update on the good old murder mystery.

With Netflix’s Young Wallander, we get a modern update on the good old murder mystery. The series opens with the Swedish police officer Kurt Wallander (Adam Pålsson) tuning into his radio while out on patrol with his colleague and close friend Reza Al-Rahman (Yasen Atour). As the radio crackles with information, a Nordic rain lashes their car window. It is a befitting setting for a crime fiction-themed web series where Sweden is as much a character as the dark jacket-clad sleuth. But there’s a twist in the tale. Breaking away from the timeline of the Wallander novels by Swedish crime writer Henning Mankell, the Netflix version is staged in modern Sweden.

The backdrop inevitably turns the lens on the country’s current conversations around racism. The show tracks the Scandinavian nation’s refugee crisis and the contradictions around it, given that the country has positioned itself for years as a safe haven for immigrants. In fact, the narrative of asylum-seekers presents a vibrant canvas to paint a menace-fuelled drama. 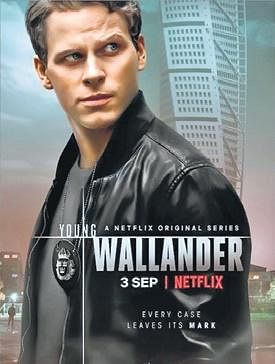 The intimacy between the landscape and the young protagonist—whose older reincarnations have already been documented in Mankell’s books and other screen adaptations—work well to reel the viewer in. In the older and much-appreciated series, Kenneth Branagh played a mature version of the character. The dark crimes that he investigates, affect his family and relationships. The new one, too, has a grey world, against which plays out the diabolical murder of a Swedish teenager. It catalyses events motivated by online propaganda, misinformation, racial discrimination and nightmarish violence. The larger issue of the global immigration crisis owing to revolutions, war and vindictive regimes, as well as its impact on asylum-giving nations, has been expertly woven into the plot.

The mystery narrative is strongly anchored by Pålsson playing the young Kurt, the only Swede actor in the series. Cast as an investigator deeply invested in his field of inquiry and empathetic towards the marginalised, Pålsson delivers a performance contoured with vulnerability. It is disappointing that the show’s other characters are not visualised with equal depth. Produced by Yellow Bird UK—which was also the original producer of the BBC series Wallander in 2008—it seems the Netflix show is in practised hands.

Enchantingly filmed by cinematographer Gaute Gunnari, the architectural heritage of Malmö in the Lithuanian capital of Vilnius, is vividly broughtly alive. The Soviet-era apartment blocks offer the perfect backdrop to a dramatic tale toggling themes of gang wars, weapon smuggling and of course, immigration.

Now we are on Telegram too. Follow us for updates
TAGS
Netflix young wallander Adam Pålsson Ellise Chappell