Tokyo Olympics 2020: Challenges of hosting the sporting spectacle in these trying times

The 32nd Summer Games in the Japanese capital is going to be unlike any other Olympics. With fans barred from attending, the Olympiad will be devoid of the atmosphere that athletes feed on.

In 1908, Ethelbert Talbot, then bishop of Central Pennsylvania, was invited to the fifth Lambeth Conference in London. Held once every decade since the 1860s, ‘the Lambeth Conference is a gathering of bishops from across the Anglican Communion for prayer and reflection’, according to its website. This conference coincided with the fourth Summer Games in London.

During the conference, the bishops were given a chance to preach at various churches in the area. Talbot was allowed to address a prayer session at St Paul’s Cathedral on July 19, 1908. It was a service that was attended by Olympic participants and International Olympic Committee (IOC) officials.

As Talbot had viewed the win-at-all-costs attitude as abhorrent, his sermon included: “(...) St Paul tells us how insignificant is the prize. Our prize is not corruptible, but incorruptible, and though only one may wear the laurel wreath, all may share the equal joy of the contest (...).”

The IOC president at that time, Pierre de Coubertin, was struck by what he had heard. He gave his twist a few days later. In a speech on July 24, Coubertin said, “The important thing in life is not the triumph but the struggle. The essential thing is not to have won but to have fought well.” Ultimately, this was adopted as the creed of the Olympic Movement. (The above details were in Ture Widlund’s paper titled ‘Ethelbert Talbot: His Life and Place in Olympic History’). That quote rings true especially today. Athletes who will compete in Tokyo will do so in the knowledge that they have had to fight like hell to even reach Tokyo in the first place.

A Sharath Kamal calls the Olympics a ‘celebration’. A ‘celebration’ of elite athletes descending on a city for two weeks every four years. Having taken part in several—Tokyo will be his fourth—the 39-year-old knows the atmosphere around the Olympic Village and different arenas like the back of his hand. That atmosphere, he readily admits, ‘will be missing’. “I am going there to train, compete, train, compete and leave when it’s time to leave. Will I miss the socialising aspect of the Olympics? I don’t think so. After the year all of us have had, we are just thankful that we can take part. All of us are going to be mindful of the rules, be in our rooms and compete when it’s out turn... that’s about it.” 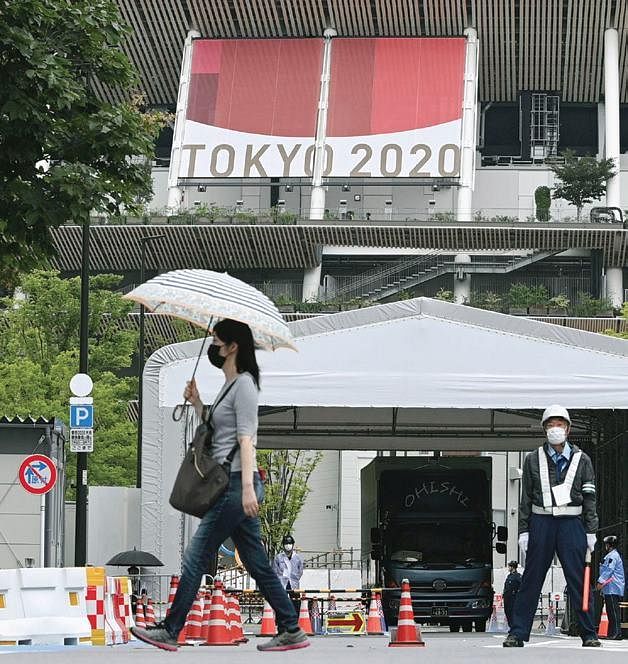 Sharath, one of the senior-most athletes in the Indian contingent, is also eyeing a victory that will be construed as an upset throughout the wider table tennis fraternity. A mixed doubles medal with Manika Batra. For context: forget medalling, no Indian player or team has ever progressed to the quarterfinals in table tennis in the history of the Olympics. So why does he think they have a chance? With just 16 pairs, winning two matches will put them in the semifinals.

The break has allowed both of them the opportunity to have several training camps together. It has also showed them that they do have the game to take on the best. At the qualifying event in Doha, the pair took down the World No. 5 duo of Lee Sang-Su and Jeon Ji-Hee. Wins like these add confidence. Even if the two-time Asian Games medallist lost out on training time during the early months of the pandemic, Sharath used it to work on his body. He looked at himself in the mirror, before undertaking tests in body mechanics.

He learnt stuff about himself (2016 medallist PV Sindhu also did something similar last year) that he didn’t know before. The effect? “I think in the last 10 years, this is the best I have been, physically and mentally,” he says. It may or may not translate into performances. But one thing is clear. Athletes have used the time out to try and level the playing field.

That, in a microcosm, reveals the kind of battles Indian athletes had to face. But it didn’t stop there. Take the case of Sajan Prakash, who recently became the first Indian swimmer in history to breach the  ‘A’ time (Olympic Qualifying Time). Though he escaped the lockdown as Thailand was his base at the time, even getting back to the water was a challenging experience.  “Those first three-four days... I felt like s***,” he had told this daily last May. “It’s almost like you are rediscovering yourself after more than two months of no water-based training.” It’s fair to say that he has rediscovered himself in the last year. At Rome—a city famous for gladiatorial conquests—the 27-year-old turned in a gladiatorial performance of his own.

The most common method of legal surveillance is ankle bracelets. It monitors movements 24/7. If the person wearing it moves away from the accepted path, it’s logged in the system in real-time. This ‘offense’ is relayed to officers who make their move to question the person within minutes.
There won’t be any ankle bracelets in Tokyo. But there is going to be 24/7 surveillance—all of it backed by the state—to ensure there are no Covid-19 rule breakers. On the night of June 9, a Reuters headline captured the true essence of the Games in the pandemic era. “Athletes will be subject to GPS monitoring, says Tokyo 2020 CEO”. Three weeks later, foreign reporters were told they could be legally doxxed.

“The people of Japan will be paying close attention to your every move as you participate in the Games,” said a media advisory. “In the unlikely event that you are suspected or found to be in infringement of the rules (the Playbook), such activity may be photographed and shared on social media by bystanders.”

There’s a little more freedom for athletes but the restrictions can have the feeling of somebody asphyxiating you. At the Olympics, you want to breathe in that fresh air. You don’t want to keep looking at the four walls when you are not training. That, however, may not be possible owing to the delta variant that’s responsible for a wave of new infections in multiple countries, including Japan. The International Olympic Committee (IOC) installed new rules for athletes coming from specific countries to ensure the sanctity of the bubble remained intact.

These new rules are a sort of soft quarantine wherein you can’t even interact with colleagues from other countries at least for the first three days upon landing in Tokyo. So one can imagine that extra pressure on the shoulders of athletes. They not only have to perform but they will have to perform keeping in mind all extra restrictions in place. If you fall foul of these restrictions, you could even be deported. Sharath concedes performing in such a situation is a challenge.

Divya Jain, a sport and counselling psychologist at Fortis Hospital, Delhi, who has spoken to multiple Olympicbound athletes during the lockdown last year, is of the opinion that it will be challenging but their focus has changed. “They know what these rules are. But their focus has changed,” says Jain. It’s true that many of India’s elite complained about anxiety, sleeplessness, loneliness, lack of motivation and frustration in 2020. Some of the athletes went to Jain with these issues.

In the weeks leading up to the biggest days of their lives? All of them have better clarity and have imbibed the one gospel that was told to them throughout 2020. “Control the controllables”. Even if it’s easier said than done—performing in a potentially empty stadium in a city under ‘state of emergency’ due to rising Covid cases whilst worrying about the situation of their families and friends back home can be anxiety-inducing— they are now better equipped to handle these challenges.

An example is the everyday Covid tests they will be subjected to. It was the great unknown in 2020. In 2021, it’s almost second nature. “Used to it now. I don’t think we will really be worrying about whether we will test positive. Have been subjected to scores of tests already so it’s fine,” is how Sharath bats away potential concerns.

Rahi Sarnobat’s carry on baggage is going to be a mini pharmacy. It will have a steamer, a pulse oximeter, temperature gun, vitamin supplements, Ayurvedic tea bags and homemade turmeric powder among other things. Even if the shooter only recovered from Covid-19 in April, the 25m pistol contender is taking them ‘in case a teammate needs them’. She isn’t going to be the only athlete carrying Covid-19 related paraphernalia.

This point is to flesh out the fact that the virus will very much form a major backdrop. Even if other events have held their marquee meets, the Summer Games is different. It sees tens of thousands go past the various turnstiles in one city for about 20 days. Think of it like this: the closest comparable sporting event is a football World Cup but in one city. There is going to be a risk factor associated with it. So why are they going ahead with it? A simple answer is ‘money’.

An AP report in June painted a grim picture. “The official cost of the Tokyo Olympics is $15.4 billion, the government audits suggest it’s twice that. All but $6.7 billion is public money. The IOC chips in only about $1.5 billion to the overall cost,” the report said. “The pressure to hold the Games is largely financial for the Switzerlandbased IOC, a nonprofit but highly commercial body that earns 91 percent of its income from broadcast rights and sponsorship. Estimates suggest a cancellation could cost it $3 billion to $4 billion in broadcast rights income.”

Officials have also spoken about sport’s power to be a unifying force. Tokyo Governor Yuriko Koike, in an interview with Time last year, said: “(…) you can feel the power of sport is even stronger because of the current situation. Tokyo 2020 will be symbolic to prove that people, altogether from across the world, have defeated the virus.”

The reality, though, is that the virus is winning. The Games will be held under a state of emergency. However, what will also be true is that the ones who will perform for the TV audience have fought like hell to reach there.

Things you may not know

1,50,000
The number of condoms the organisers will distribute this year. However, in a big departure from previous Games, participants cannot use it till they go back home.

206
The IOC has requested all 206 National Olympic Committees to send at least one woman athlete to the
Games for the first time. In all, there is likely to be a 51:49 split in terms of gender.

5,000
All 5,000 medal winners will receive unique medals made of recycled consumer electronics. This is to spread awareness of e-waste recycling.

1
All athletes will be subject to a minimum of one Covid test per day during their stay in Japan.

70,000
Number of estimated athletes, officials and media that will be in Japan as part of the Olympics

15%
Roughly percentage of the Japanese public have been fully vaccinated. The country has a history of a vaccine hesitancy and saw a slow vaccine roll-out.

Now we are on Telegram too. Follow us for updates
TAGS
Tokyo Olympics 2020 Olympics coronavirus covid