The uncanny similarities between what is written in the novel and what a conscientious young adult would find happening elsewhere around him are hard to miss.

The language is poetic. The characterisation is sharp. The sentences are short and simple. Nonetheless, Devashish Makhija has managed to convey profound thoughts. The uncanny similarities between what is written in the novel and what a conscientious young adult would find happening elsewhere around him are hard to miss. It was psychoanalyst Carl Jung’s idea of the ‘collective unconscious’ that shaped Makhija as a storyteller. “There is so much shared information in our unconscious minds that we—as creators and consumers of stories—find resonance in one another’s mythologies and experiences. This shared understanding gives rise to archetypes. I’m interested in these archetypes. What makes a story about a little corner of Odisha resonate with a Dutch musician in New York? What emotional experiences do these two share? What elements can make a story culturally specific in its details yet emotionally universal in its appeal?” he asks. 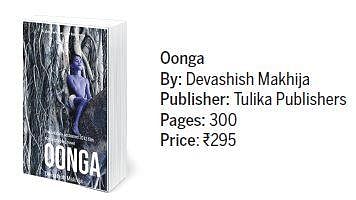 The cover has a blue-skinned boy perched atop a banyan tree branch. He is the protagonist, Dongria Kondh boy Oonga, whose resemblance to the Na’vi of James Cameron’s Avatar is striking. The story of Oonga finds its seed in a small anecdote. Makhija narrates, “Sharanya Nayak, the then local head of Action Aid, told me how she took a group of Adivasis to watch a dubbed version of Avatar. They hollered and cheered the Na’vi as if they were their fellow tribals fighting the same battles. It was their story, they felt, but were shocked when the film ended happily. Here the Adivasis were fighting the same battles and losing. It wasn’t reflected in Avatar, and that distressed them.” That’s how Makhija conceived Oonga, albeit with a difference. “Oonga runs off to go watch Avatar in the nearby town and returns convinced that he was a Na’vi and could save his village from pillaging the way the Na’vi did. But, of course, things don’t play out like they do in the movies. We replaced Avatar with its source material, the Ramayana, as we developed Oonga,” he adds.

Makhija has used a little tribal boy as the medium to convey the message. “Children are naïve hence fearless. The absence of fear is an attractive quality that draws young audiences into stories like nothing else can,” he says. Using it as a tool, Makhija adds, “Youngsters are constantly being told what not to do. Suppose, they are shown this little boy or little girl who, despite being told not to undertake certain journeys, proceeds to undertake them. In that case, it will make the young readers live their fantasy of rebellion vicariously through such characters. Once that is done, it will become easier to immerse them in the deeper questions I seek to raise through Oonga.”

Oonga has documented the Adivasi crisis, their conflict with the CRPF and corporates, and juxtaposed it with mythology for young adults. “In storytelling, we can document the flip perspective of the people. I see myself as a chronicler of this counter perspective. Young adults will be the decision-makers of tomorrow. They need to travel into tomorrow armed with both sides of the argument—the side they will receive with almost a military lack of choice from their curriculum, and the side they will actively choose to receive from stories such as Oonga,” he sums up.

Now we are on Telegram too. Follow us for updates
TAGS
Oonga Devashish Makhija