Indian police vilified more than what they deserve

They see politics and mala-fide intent everywhere and have not even spared the court for acquitting all accused in the Babri mosque demolition case.

These are difficult times for Indian police. After seven months of February riots in Delhi, police submitted a 17,000-page charge-sheet against 15 persons (12 Muslims and 3 Hindus). But it pleased neither liberals nor political opponents. They accused police of communalising the investigation by not prosecuting an equal number of Hindus and Muslims, suggesting that evidence should have been manufactured for charges to appear fair. Julio Ribeiro and several former police chiefs had similarly claimed that investigation had targeted mostly peaceful Muslim protesters but absolved Hindu instigators.

They did not bother to read the charge-sheet which had culled its evidence from an array of technological tools that helped identify rioters, pinpoint their precise role and trace the flow of funds, used for the riot.
Joining the police bashing, hundred-odd authors, film-makers and academics sought release of Umar Khalid and Sharjeel Imam, mascots of ‘tukde tukde gang’, who had been kept detained, pending further investigation. 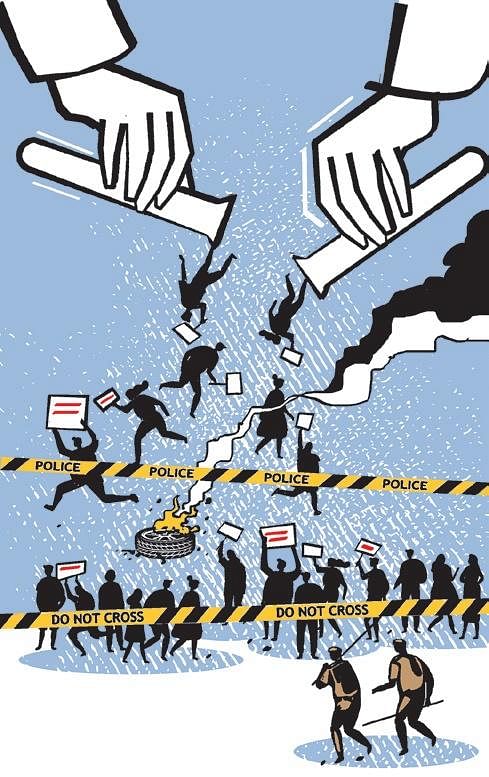 Others debunked the police claim that there was an unmistakable connect between anti-CAA protesters and riots in order to project India before the visiting US president, as a nation of Hindu bigots. They were also aghast that police could dare to implicate celebrities like Salman Khurshid, Congress leader, for stoking communal passions during the run-up to riots, for they were above the law. Mumbai Police also had a harrowing time while handling Shushant Singh Rajput’s case. Not many were willing to trust its investigation nor they are likely to accept the CBI’s findings.

They see politics and mala-fide intent everywhere and have not even spared the court for acquitting all accused in the Babri mosque demolition case. A decade ago, the CBI had sought dismissal of the case for want of evidence but was overruled for political reasons. No judge could ever convict onlookers for conspiracy unless evidence showed them egging the mob to tear down the structure. No one doubts the mosque was razed but conviction cannot be secured on the basis of hearsay.

UP police have also been at the receiving end over their handling of an alleged rape and murder of a Hathras girl. The incident is shocking but no policeman could have prevented it. Truth is, every girl is a potential victim of rape. Fear of police or capital punishment cannot protect her in a society that is indifferent, sick and reacts with an agenda. In 2019 alone, 32,033 incidents of rape were reported from across the country. These numbers will only rise in future.

As 13 former high court judges have pithily remarked, such criticisms are always insincere and meant to promote distrust for institutions involved in investigation of crime, obstruct dispensing justice, glorify crime and create wedge in social fabric.

Now we are on Telegram too. Follow us for updates
TAGS
Delhi police Police Delhi riots