No clarity on Sidhu's plans, Captain welcomes him to congress

There is no clarity on where the cricketer-turned-politician’s newly launched Awaaz-e-Punjab is headed for.

CHANDIGARH: Even as Punjab Congress chief Captain Amarinder Singh, in a U-turn, welcomed into his party fold all the “anti-Badal forces”, including Navjot Singh Sidhu, there is no clarity on where the cricketer-turned-politician’s newly launched Awaaz-e-Punjab is headed for.

“Not just Sidhu, but all those committed to Punjab’s governance, to whichever party they may belong, are welcome to join the Congress unconditionally,” he said on Thursday. “Only those who identify with the Congress culture and are prepared to work within its disciplinary ambit will be allowed to join,” he added. 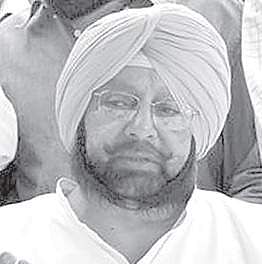 Sources said the front was likely to take a decision on alliances in a week’s time. Sidhu had a meeting with two independent MLAs from Ludhiana — Balwinder Singh Bains and Simarjeet Singh Bains — and former SAD MLA Pargat Singh who are now part of Awaaz-e-Punjab in Delhi. They reportedly discussed the present scenario and possible alliances, including with the Apna Punjab Party floated by former AAP state convener Sucha Singh Chhotepur.

Though Sidhu has been open to an alliance with the Congress, he had a rider: Awaaz-e-Punjab won’t have not any “relationship” with Amarinder. For his part, Amarinder had earlier said that while Pargat Singh and other members of the front were welcome to the Congress, Sidhu wasn’t.

Sources said that the Congress is now upbeat as a India Today-Axis opinion poll gave a clear edge to the party in the forthcoming Assembly elections. Former SAD MLA Inderbir Singh Bolaria joined the party on Tuesday.

In response to a question on the AAP’s prospects in the polls, Amarinder dismissed the party as one of “crooks who want to use Punjab for their vested political interests”. “After playing their dirty games in Delhi, which is already suffering from the AAP’s misgovernance, they are now trying to do it in Punjab,” he said.

The sexual misconduct of various AAP leaders are no secret, the former chief minister claimed, in an apparent reference to reports that AAP leaders were asking for sexual favours from women in exchange of poll tickets. “The people of Punjab are intelligent enough to distinguish good from bad and will teach a befitting lesson to all those who have been working to the state’s detriment,” he said.