Last year, the government had even launched an online platform for bureaucrats to file property details so as to simplify the process and bring in transparency.

NEW DELHI: As the deadline for filing immovable property returns for 2016-17 inches closer, it has been revealed that over 280 IAS officers have yet to file IPRs for 2015-16, according to data posted on the Department of Personnel and Training website.

In a letter last week, the Centre issued instructions to all bureaucrats to ensure their IPRs for 2016-17 are filed by the January 31, 2018 deadline.

According to the December 22 letter, a copy which is with Express, failure to submit property details will have serious consequences.

“In view of DoPT instructions, it is reiterated that failure to ensure timely submission of IPR would result in denial of vigilance clearance,” the letter said. 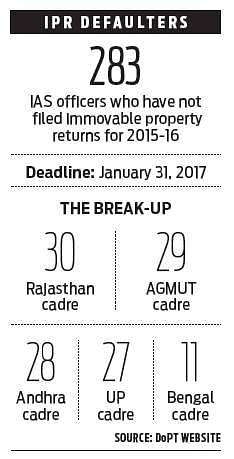 Last year, the government had launched an online platform for bureaucrats to file property details so as to simplify the process and bring in transparency.

Prior to that, bureaucrats would submit hard copies to their respective cadre-controlling authorities, who would re-direct them to the DoPT. Several files would get lost in transit, officials said.

The online portal for filing IPRs was developed by the National Informatics Commission. It is called the Smart Performance Appraisal Report Recording Online Window (SPARROW). Of the 280 IAS officers who have yet to file IPRs for 2015-16, there are 30 from the Rajasthan cadre, 28 from Andhra Pradesh, 29 from AGMUT and 27 from Uttar Pradesh. Defaulters include senior officers too, some from the 1983 batch.

Officials said the online portal was launched for many reasons — prevent loss of documents in transit, delay in uploading IPRs by state governments, uploading IPRs without dates and so on.

According to norms, IAS officers have to give details of their assets and liabilities to the government.

They have to take the Centre’s permission before accepting gifts worth over Rs 5,000 and inform the Centre if they accept gifts of over Rs 25,000 from kith or kin.