Are remains on Mont Blanc from Air India crash?

Human body parts found on Mont Blanc in the Swiss Alps on Thursday open up an intriguing possibility:

Human body parts found on Mont Blanc in the Swiss Alps on Thursday open up an intriguing possibility: are these the remnants of victims of one of the two Air India plane crashes that took place more than 50 years ago?

What was found?
A hand, the upper part of a leg, and the wreckage of a jet engine, which could be from one of the two Air India planes 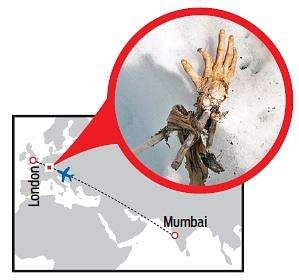 Who found them?
Daniel Roche, an amateur airplane accident investigator who has spent years combing the Bossons Glacier in the Swiss Alps looking for remains of crash victims

How the crashes happened
November 1950: Air India Flight 245 from Bombay to London was flying over France on the morning of November 3 when it went off the radar while at an altitude of 4,700 m. The plane hit the side of Mont Blank

40 Passengers on board. No survivors found

January 1966: The pilot of Air India Flight 101 from Bombay to London thought he had passed Mont Blanc and descended to land in Geneva. The plane flew straight into the Mont Blanc massif

117 Passengers, including Homi Bhabha, the father of India’s nuclear programme, on board. All died

Homi Bhabha connection?
India’s nuclear pioneer was on the Boeing 707 that crashed near Mont Blanc in 1966. Many years later, a team of journalists claimed to have found the wreck and declared to have found debris of an aircraft other than a Boeing 707. Bhabha’s mysterious death gave rise to several assassination theories

Whose remains are these?
The hand and the leg are probably not from the same person, say the local Swiss police. It’s not known to which of the two aircrafts the jet engine belonged

What now?
Roche’s finds were taken down from the site and will be examined by experts